The witching hour is upon us. Tomorrow being Halloween - the traditional time for ghouls, demons and all manner of nasties to come out to play, not to mention kids on the street demanding of chocolate with menaces - today seems like the perfect time for the tale of how one of the best chessers the world has ever seen once played a game with a dead guy.

Did Viktor Korchnoi (born 1931) really play chess with Geza Maroczy (born 1870; died 1951) during the closing years of last century? It seems unlikely, but, as with all the best ghost stories, this isn't just a yarn that's not just bizarre and hard to believe: there's a macabre twist at the end too. 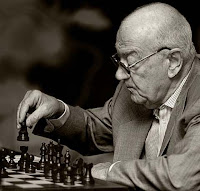 Korchnoi gave his account of his game with Maroczy in the second edition of his biography (Chess is My Life, Olms 2005). Back in 1985, he writes, he was contacted by the president of the Swiss Society of Parapsychology, a certain Dr. Eisenbeiss. The man asked him a direct question: out of the countless masters no longer alive, who would he most like to play? After some consideration, Korchnoi responded with a list – Capablanca, Keres or Maroczy – and a few days later received word that the erstwhile Cuban and Estonian stars could not be located. Geza Maroczy, however, had been found, was up for some chess, and in fact had already made his first move! 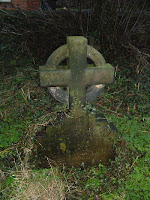 How does one go about playing a game of chess with a dead person? In this case, Viktor would give his move to Eisenbeiss who would in turn contact a Medium – the mysterious Robert Rollans – who used his talents to get in touch with Maroczy to tell him what Korchnoi had played. When it was time for the dead man to move the chain simply operated in reverse. This procedure continued for eight years, the game ending with Maroczy’s resignation after 47 moves. Korchnoi, it seems, never actually met Rollans in person until they appeared together on a German TV programme in 1992.


We played a French Defence, an opening where all the subtleties are familiar to me ... [The opening] was played very weakly by my opponent. This is not hard to understand, if it is borne in mind that he had not played for 50 years and that he did not even have a chess set.

Viktor Korchnoi, Chess is My Life

So it was a very much alive Viktor Korchnoi against a really rather dead Maroczy? The man himself says that he was “inclined to believe” in the “migration of souls” that would allow such an encounter. Nevertheless, there are, I’m sure, many readers of our humble blog who retain their doubts.

The more sceptical amongst our readership will tell you that since Maroczy died in 1951 he was still dead between 1985 and 1993. They will point out that snuffing it – by definition – means one is no longer able to play chess nor chat with corpse-botherers like Rollans for that matter. They will refer you to Occam’s Razor and the likelihood that the evidence (specific details relating to an obscure opponent - Romih - and the Karlsbad tournament of 1929) received from Maroczy to buttress his claim that it was indeed he on the other end of Rollans’ hotline to the After Life, in fact originated from the Medium himself and was obtained from a quite different, and probably much more mundane, source.

Fraud, then? It seems possible/probable/likely/certain (delete as you feel appropriate) that somebody hasn’t been entirely honest somewhere along the line. Not that there need necessarily have been any conscious or deliberate attempt to pull the wool over anybody’s eyes, though. In psychic circles there are folk known as Shut Eyes – people who have no special powers or ability to speak to the dead, but fervently believe that they do and can.

The game continued for many years - I was very occupied with competitions, the medium was often ill, and he was not in a condition to make contact with anyone in this world, let alone the other one. I was told, Maroczy too was not in the mood to play - he was bored.

Viktor Korchnoi, Chess is My Life

So, what of Rollans? The real deal? Well intentioned, yet misguided? Harmless charlatan? Vile? We only know him through Eisenbeiss via Korchnoi, so who's to say?

I’d love to talk to him about his encounters Korchnoi and Maroczy, but sadly, not possessing his skills, I cannot. After the best part of a decade of play, Rollans died less than three weeks after Maroczy-Korchnoi had come to an end.

PS:
Viktor Korchnoi photograph from Chessbase
Posted by Jonathan B at 12:01 pm