Last season, I lost two games out of the twenty two I played. This season I've played two games - and lost one already. Clearly, then, not a good start, and against a lower rated opponent too.
On the other hand, I told myself cycling home after the loss, I have in the past blundered terribly at least once per season - and so I was due one. Overdue one, in fact, since my losses last season were games where I was pretty much outplayed. Plus it was the kind of blunder I've suffered before: involving a rook to king's sixth, my own weird blind spot.
And my opponent implicitly agreed, didn't he, that I was unlucky, that his win was a lucky last minute break in a lost position? "Sorry," he said abashedly, as I held out my hand to resign. I mumbled a few words about how, yes, I really thought I was a bit better throughout the game. He apologized again - and each commiseration from team mate included a comment along the lines of "weren't you better there? quite a lot better? a piece up at one point?"
Well, come take a closer look with me. There'll be two tests for the reader as we go through as well - one of accuracy, the other of judgement. Here's the position where my opponent and I both thought I'd thrown away the win: 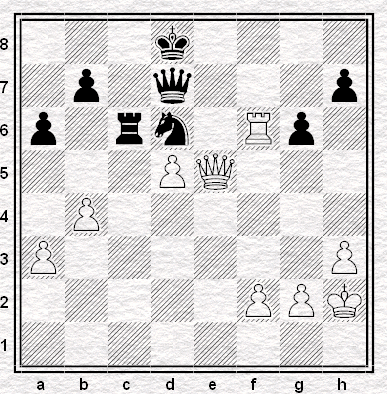 I played 38...Qe7, overlooking 39.Re6 which is easily winning in all lines for white.
I thought my queen move was a little finesse, an improvement over the immediate 38...Rb6, which was also surely winning after 39.Rf8+ Ne8 40.Qb8+ Ke7 and the checks run out. Don't they? Alas not - I realized the next morning that 41.Rxe8+! nets white a pawn, although the resulting queen ending may be hard to win in practice.
But in fact all this is unnecessary. After 38...Rb6 in the diagram above, white has a much more direct and immediate win - which I leave the reader to uncover, the first test.
The conclusion is that 38...Qe7 is not really a blunder at all - the position is lost already. It just made white's job easier. So where did I go wrong? If you'd like to work that out for yourself, here are the moves to play through - the second test:
So: where did black go wrong? 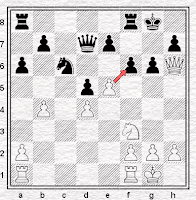 If you played through the game, probably you sensed that after 17.exf6?! white is fundamentally, but very slightly, worse: he has a weakened queenside that he will be tied to the defence of. 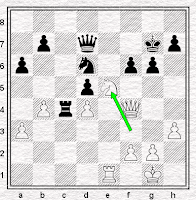 And equally at first glance you may suppose that 31.Ne5 looks like a rather desperate shot to complicate matters.
But this intuition is wrong: 31.Ne5 is good enough for a draw, which white is surely correct to take . . .
. . . not the least because if black tries to defend to win, he may lose instead, as happened when I played 36....Ke7?? - instead 36...Kg7 should eventually lead to a draw. 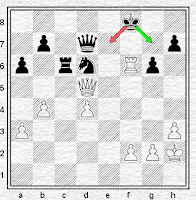 So why did I play 36...Ke7? Well, I misanalyzed the resulting position. And the cause of that? I think because I assumed I was winning. Hadn't I been very so slightly better for most of the middlegame? Wasn't 31.Ne5 just an attempt to confuse matters? Therefore, a win must be there, waiting to be found . . .
To my considerable surprise, this means that 29...Nd6 is actually the blunder that throws away my winning chances, by allowing the sequence that leads to 31.Ne5: 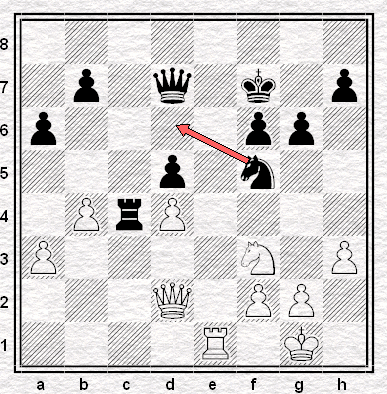 Congratulations if you sensed that correctly - I had no hunch whatsoever until Rybka showed me otherwise. In retrospect I could annotate this along the lines of "black's knight maneuver is too ambitious - with a weakened kingside he must be ever vigilant against tactical shots, so should take a slower approach", but what is curious is that my thought processes couldn't have been further from this at the time. My pieces were gradually taking up great positions against the white queenside. How could his pieces - getting nudged defensively this way and that - suddenly cohere into an attack? Still, it seemed to surprise my opponent and our teammates just as much. Perhaps it just goes to show that amateurs shouldn't suppose to win games through the accumulation of small advantages: we're not subtle enough. But I certainly feel like I learnt something from this loss, that much I do know.
After my opponent apologized for the second time, I managed to say that he had nothing to say sorry for. True, but in retrospect an understatement. I should of course have just said: "Congratulations! Well played!"
Posted by Tom Chivers at 10:01 am