What happened next XIV 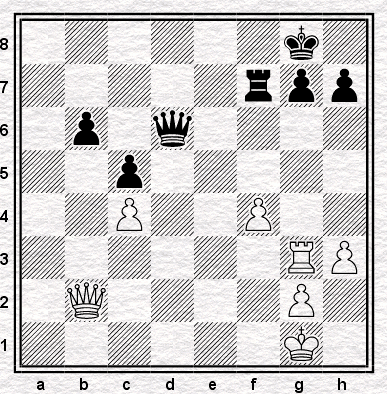 Wednesday's position was from Tringov-Korchnoi, Skopje Olympiad, 1972. Bulgaria v USSR, board two, fourth round of the Final A Group.

Tringov was forfeited under dubious circumstances as the scoresheet with his sealed move was lost.

while Mike Fox and Richard James in The Complete Chess Addict (Faber and Faber, 1987) have a more detailed account:

In a quite respectable position, against Korchnoi, the Bulgarian grandmaster sealed (he thought) his move, and adjourned for a night of analysis. Next day he found what he'd got was an empty envelope. The day after, after an agonizing search, he found the errant score sheet tucked in a jacket pocket. Understandably, he was too embarrassed to tell his team mates.

In international events it is usual for the player sealing the move to write down his move on his score sheet, place both his own and his opponent's score sheet in the envelope and then seal the envelope himself. At Skopje the procedure was slightly different. Instead of writing the sealed move on a score sheet, a separate piece of paper was provided. When Tringov was handed the piece of paper he queried its validity, claiming that he had always written his move on his score sheet in the past and that he saw no good reason to deviate from this practice. His attitude was quite firm. He rejected the blank sheet of paper, wrote down his move...

...the following morning the adjourned position was set up. The envelope was opened and the score sheet removed but when the arbiter looked to find the move that Tringov had written down it was nowhere to be seen! On a closer inspection of the envelope it was discovered that it was not even Tringov's game score but that of his opponent. The only thing that was normal about the whole situation was the envelope, clearly written in Korchnoi's hand, which was undisputedly the same one that had been handed to Tringov the previous evening.

Tringov was horrified. Where had his move gone? The first suggestion was that the arbiters were somehow at fault but the Yugoslav organizers strongly denied the accusation. With no sealed move in the envelope there was only one possible decision: Tringov must forfeit the game. The Bulgarian captain instituted formal appeal proceedings but there was clearly no real hope of having the decision reversed. After a meeting of the arbitration committee (at which Tringov was able to state with absolute certainty that he remembered putting his sealed move in the envelope) the original decision was confirmed...

...Various possible explanations were hypothesized. A few of the more evil-minded players suggested that because of their poor start in the finals, the USSR were taking steps to ensure that they did not lose any more matches. Others thought that the arbiters had lost Tringov's score sheet and didn't wish to admit their folly. It was not until 2.00 am on the morning after the closing banquet that we first learned the truth from one of Tringov's team mates: he had indeed written down his move on his score sheet but had absent-mindedly put the score sheet in his pocket. When, a few days later, he discovered what he had done he was too ashamed to admit it to the organizers.

[Thanks to Richard James and John Upham for their assistance.]

(Curiously, the score at Chessgames gives another ten moves that were never played - somebody else's analysis, one assumes. But whose?)

[What happened next? index]
[Ray Keene index]
Posted by ejh at 7:55 am