When we were Kings XII

… the world sang songs about us

Chess: The Musical – playing at the Lyceum Theatre in Sheffield this week

Musicals. There are two things about them that I find interesting: the fact the phrase “a fan of musical theatre” is, in certain circles, employed as a euphemism for homosexual tendencies (not, as Jerry Seinfeld would tell you, that there’s anything wrong with that) and the apparent convention that this form of entertainment should not take as its subject matter anything that isn’t straightforward to present and already rather familiar to its audience. It is the second point that is of interest to us today.

Six months ago I wrote about the position of chess in the popular culture of the 1970s. The prominence of chess in news reports back then never ceases to astonish me. Can you imagine that The Times would cover Vishy Anand giving a simul with a front page report today? Well, they gave Karpov one on 15th August 1977 after he'd played 10 juniors in London.

This kind of coverage linked the game with the on-going ideological struggle between the Western Democracies and the Eastern Bloc countries and, whether they liked it or not, brought the game into the lives of non-players. No surprise, then, that when Tim Rice, Benny Andersson and Bjorn Ulvaeus decided to make their musical about our favourite game they, like the Manic Street Preachers and their current video, chose to focus on chess from the Cold War era.

The Rice-Andersson-Ulvaeus triptych’s show borrowed a great deal from the chess world of the 1970s. The cast of characters includes an American, a Russian, a defector and a KGB colonel for a start and the story features matches for the World Championship played in Merano and East Asia (Bangkok, admittedly, rather than Baguio City in the Philippines). 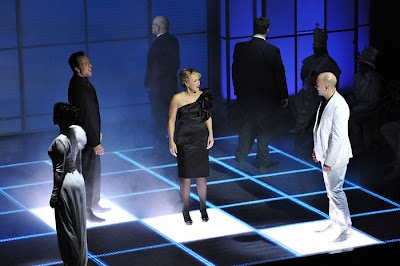 They haven't got that chessboard quite right, have they?

Chess: The Musical was a huge success and ran for a few years in London in the late 80s. I remember enjoying it a great deal when I went. Indeed, if memory serves, I not only bought the soundtrack (on vinyl – younger readers may be interested to know that we used to listen to music on things called ‘gramophones’) I also went back to see it live more than once. I was very pleased, then, to discover that it’s touring once again and am indebted to an industry insider who kindly sent me a copy of the luvvies' trade paper The Stage of 2nd September which carried an interview with the producer, a certain Michael Harrison.

While the re-appearance of chess on stage can only be a good thing for chessers and theatregoers everywhere, there’s one aspect of The Stage’s interview that I found rather strange. It’s the part where Harrison talks about his collaboration with choreographer Craig Revel. Apparently this Revel fellow is, “instantly recognised for his contributions on Strictly Come Dancing”. Well, not by your humble scribe he wouldn’t be, but, no matter, let us get to Harrison’s point.

… I had a conversation with Craig about the work he was doing and we looked for something we could collaborate on. Chess came up – he’d previously done a very successful production in Denmark about ten years ago, which I’ve seen the DVD, and is great. It’s very Craig – very sexual, very on the edge, and focused on the story of the relationships, instead of the game of chess or the Cold War that it is set against.

This, it would seem, is what attracted Michael Harrison to the project. He wanted to do a musical that was called Chess, that had been written about chess, but that would, if he could manage it, include as little chess as possible and ditto for the geo-political climate of the time. 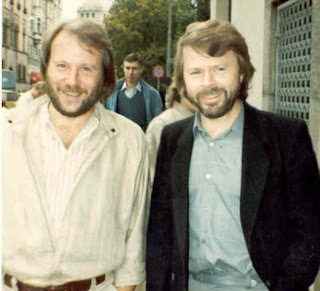 Capitalism won and now these two are bigger than chess. Happy now?

Now, I dare say Mickey – “managing director of Qdos, still the country’s biggest panto provider ….” - knows his business much better than I do; I’m quite sure that he knows what he refers to as “audiences in the regions” want, or at least what they will pay to see. Still, it strikes me as somewhat odd to want to strip away everything that makes your show different from every thing else out there; rather a shame to launch your production only after glossing over everything that makes it unique.

Why not call it “Relationships: The Musical”? Why do it all? The answer, I suspect, comes a little later in the interview.

It feels right to do chess now … [we’re] post-Mamma Mia! Now – the influence of Abba in the theatre is huge.

That is no doubt why the plan was not to tour the show with any stars in the cast. The big names on the posters would be Tim Rice and the aforementioned, Andersson and Ulvaeus. 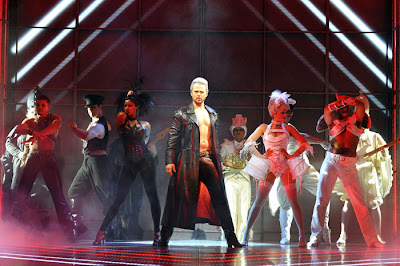 The fella in the middle is the Arbiter.
Rumours that Adam Raoof will be adopting the bare chest and leather chaps look for next month's Golders Green Rapidplay remain unconfirmed

So, in contrast to the original, the Chess: The Musical revival is not about chess: the game at all. Again, this is probably to be expected. The Cold War is so three or four decades ago and the game just isn't news any more - but Abba and Strictly Come Dancing are.


Little nuggets like this tell us a good deal about the general appeal of chess now compared to 30-40 years ago, but what will the change do to the show itself? When asked about the prospects of a West End run to follow the tour of the regions Harrison does not make it sound likely.

… I’m not restless about the fact that I’ve not produced in the West End yet. It’s got to be the right thing – I want to come in with something that’s both artistically and commercially successful when I do.

Fair enough, but, since he’s already said he expects his tour to be a commercial success, is that him saying he doesn’t consider it to be an artistic triumph? Whatever. The original was a good show and I’d be surprised if the new version - concentrating on the relationships or otherwise - isn't a fun night out for anybody who gets to see it. If you’re anywhere near Sheffield this week, or Salford next week, or Cardiff, Bradford, Southampton, Nottingham, Norwich or Plymouth do pop along and let us know what you think.

I was considering going to see this when it came to Cardiff, but after reading what CRH had to say regarding de-emphasising the chess element of the story I decided to save my money.

I'm sure it will be an enjoyable show, but if the chess elements are to be marginalised then there's no reason for me to see it rather than any number of other shows...

That's a shame SoP but I can understand your reasoning. I might yet get to see it in Southampton.