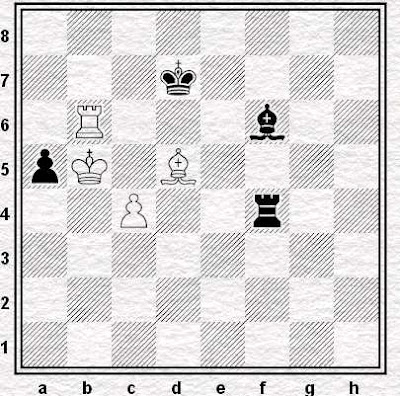 Real life experience, however, tells us something completely different ....

Evidently Viktor Korchnoi, notorious for playing on in almost any position regardless of how drawn it might be and irrespective of the strength of his opponent, knew exactly what Aagaard was getting at. Consider, for example, the position at the adjournment of the 9th game of the the Belgrade Candidates' Final of 1977/78. In his book on the match, Ray Keene wrote ...

The best that White can get is the theoretically drawn ending of rook and bishop against rook. Nevertheless, this would offer some practical chances, but it soon becomes apparent that even a symbolic triumph of this nature is beyond the capacity of White’s position.

... but nevertheless it was a full thirty moves before Vik agreed to split the point.

This wasn't a one-off instance of Korchnoi stubbornness either. Of the position after 91(!) moves of the fifth game in Baguio, Raymondo observed ...

Here the game was adjourned for a second time. Korchnoi has made no progress in the last twenty moves but now had a chance to consult reference books and analyse the position thoroughly … Alas they merely confirmed the position was a draw.

... yet once again it was another thirty-odd moves before the game ended.

Naturally, game 25 of the 1978 World Championship was no different. Here's RDK, once more (source as above):

The position is now a book draw but, unperturbed by snoring from the audience, Korchnoi plays on for another fourteen moves before bowing to the inevitable.


I'd include an example from my own games at this point, but I don't have one so I can't. There's a moral for me there, I think.

Maybe, but Petrosian won two world championship matches and he rarely played a move more than he was obliged to.