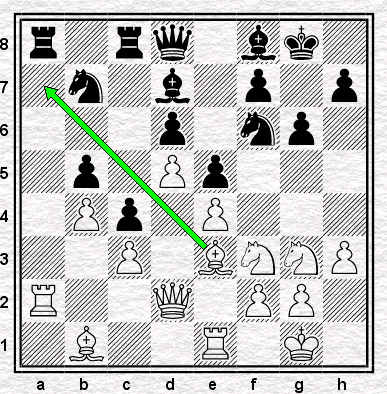 The Nice Olympiad was played between Karpov's demolition of Spassky in the Candidates' Semi-Final and his - in the end - much closer match against Korchnoi in the Final. Karpov played on top board, and won the gold medal by an enormous margin. The Olympiad, and the defeat of Spassky, arguably mark the point at which he established himself as the strongest active player in the world. This would remain the case for another ten years.

I don't know where I first saw the Unzicker game with its brilliant, original bishop move. There were two Batsford compliations of Karpov's games, but the first one came out in 1974, gave the score of only one of the Spassky games and nothing played thereafter - I didn't see the later, updated edition issued in 1976 - while the second gave his games as World Champion 1975-78 (or 1975-77 if, as noted here, you believe the front cover). Either way, the Nice Olympiad wasn't included. But I must have seen it somewhere. Wherever that was, though, I don't think I understood it.

When writing a previous entry in this series, I speculated that Karpov might have been inspired to play his famous knight retreat against Spassky by Nimzowitsch's even more famous knight retreat against Rubinstein. Maybe. Perhaps what impresses me most to this day about Karpov's bishop move - which captures nothing, attacks nothing, threatens nothing and delivers no check - is not just its seeming anonymity but its apparent originality.

Of course those more erudite than I may know of a precedent, and quite conceivably Karpov knew of one himself. But as it stands, I know of no previous game from which the grandmaster, with all his enormous acquired knowledge of themes and possibilities, may have plucked this concept. Nimzowitsch was known for his mysterious rook moves. Karpov's was a mysterious bishop.

It's still difficult to get my head around the purpose, the power of the move. In the short term, it prevents Black exchanging rooks and then taking over the a-file. I can see that. And after it has moved, it gives cover to White to double his rooks on the a-file. I can see that too. Except that after that, none of those pieces goes anywhere. Not the bishop, not the rooks. There's no effort to penetrate on the a-file. No effort to do anything. And with no effort, White wins the game on the other side of the board.

In one way, simply counting pieces, I can't see why White isn't tying up as many of his own as his opponent's. If I count a few more moves, though, I can see that Unzicker was reduced to moving his king from side-to-side, and then a few moves later, having to resign. "It is permitted to lose to Karpov with Black", was his reaction.

Fischer's 1963 win over Robert Byrne was memorably described as "more witchcraft than chess". It was - and so was this. Good beyond comprehension. Perhaps we might adapt Arthur C Clarke and declare any sufficiently advanced chess to be indistinguishable from magic.

Topalov-Ivanchuk last night and Anand-Carlsen 2007 are recent examples in this opening where white drags his opponent's forces to the queenside, then suddenly switches to the unguarded kingside. In those games the strategical outline is obvious - I think you are right that quite why it works here is far more elusive.

IIRC Nosher played a mysterious Ba7 against Kasparov in the Brussels tournament that was covered by the BBC in the mid-80s (we have the video here). I don't think it worked out as well for him as it did Karpov though.

Karpov more likely took inspiration from Game 10 of his candidates match with Spassky when Spassky played Ba7 in a not entirely dissimilar position.

This one? Interesting, I suppose that's quite possible.