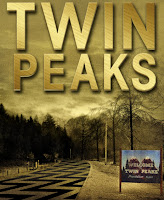 Lauded by critics, loved by fans, the first sixteen episodes of TV classic Twin Peaks see FBI Agent Dale Cooper and viewers alike gripped by the question: who killed Laura Palmer? Case solved, Cooper soon faces a new challenge: a correspondence chess game with Windom Earle, his ex-partner turned madman and murderer - each piece captured in the game resulting not only in a fresh murder, but also in a complete loss of dramatic tension and the cancellation of the series a dozen or so episodes later.

Pity! And if the brilliant Twin Peaks can't make chess on TV any good, then what possibly might? Nonetheless, you can find a snipper after the jump . . .


Later 'highlights' include local chess expert Pete Martell surrounded by books and boards, searching desperately for a capture-less stalemate in the dubious position arising after 1.e4 e5 2.Nf3 Nc6 3.d4 b6 4.dxe5, and the entombing of one of Earle's victims in a giant papier-mâché knight. That and more all findable on youtube, if your eyes can bear it.
Posted by Tom Chivers at 10:01 am

Q. ...if the brilliant Twin Peaks can't make chess on TV any good, then what possibly might?

The first series of Twin Peaks - episodes 1 to 8 including pilot - is up there amongst the very best TV ever made. Sadly the final episodes were absolute bilge. Having a chess themed murder is just another way of jumping the shark.

Using a combination of internet and calculator, I have worked out that chess takes up 0.11% of The Wire. 'Any good' = 'close to negligible'?

Negligible maybe, but great while it was there. I defy you to find anything better.

Now that I think about it, I might have something that comes close though. From the forthcoming schedule it looks like you're going to have to wait until the end of the month to see it. Or I might be able to do it Monday. We'll see.

From memory, Laura Palmer's murder wasn't solved until partly through 2nd series, no?

Don't remember it turning to bilge, but it was scarier than anything I'd ever seen in the cinema, let alone on my mum and dad's colour portable, whilst revising for my A-levels!

The more or less immediate bilgeward turn comes straight after the murder. We watched about one or two episodes per evening in a row and the drop in the quality of the writing is obvious. All tension goes out of the stories. Imo it does pick up again for a few episodes before it gets cancelled.

I think the creators originally planned for Laura's murder to never be solved, just for the series to go deeper and deeper, but the studio forced them to resolve the plot. They then felt obliged to introduce some new, self-contained plots, in an effort to woo new viewers without bogging them down in the complications they'd already established. Too bad.

I never thought that who actually killed her was of the slightest importance. The show was almost entirely about atmosphere rather than plot.

What the name of this chess set? This set was made specially for movie series or not?
This chess set more cool than from a film "Bicentennial Man".

Just a brief correction: Windom Earle's victim was in a papier maché pawn, not a knight.

(Thanks to Rob B for sending us this observation, which we accidentally deleted!)