What happened next? XVI 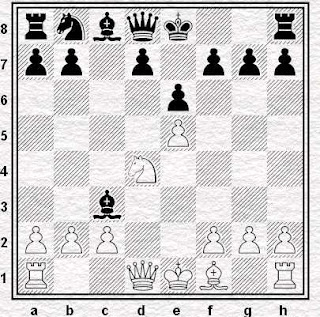 The World Open: Philadelphia, 1993. It is the eighth round and John von Neumann has the White pieces.  His game begins like this ...


... reaching the position at the head of today's blog. So, What Happened Next?

The answer, should it not appear in the comments box in the meantime, will be revealed in a bonus post which will be published tomorrow morning.

Ah. I think I know this one. Long pause, white fiddles with his hat, smoke emerges, forfeit.

davee is right but wrong.

Sophie Aldred walked past the board and white was so distracted that he played Qd2 by mistake.

Alas not correct my anonymous friend.

As davee has said, there are three legal moves. Most of us wouldn't have too much difficulty in identifying 9.bxc3 as the best of the three. Von Neumann "studied" the position for about 40 minutes before finding and playing the correct move. Speculation: his electronic communication system broke down temporarily, leaving him unsure what to do. David Sedgwick

One of the earliest known cases of using technology to cheat was in 1993 at the World Open, a dreadlocked, headphone-wearing, unrated newcomer, who took the name "John von Neumann" (matching the name of a famous computer science pioneer), scored 4½/9 in the Open Section, including a draw with a grandmaster and a win over a 2350 player. This "von Neumann" seemed to have a suspicious bulge in one of his pockets, which appeared to make a soft humming or buzzing sound at important points in the game. "When quizzed by the tournament director, the ‘lesser’ von Neumann was unable to demonstrate even a rudimentary knowledge of some simple chess concepts, and he was disqualified.

Sorry for delay in publishing your comment Richard. It got eaten by our spam filter for some reason.

I know a few players who do that.