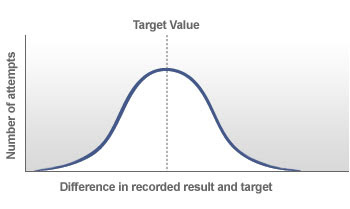 Already a week gone by since Twyford. Not to worry. There'll be another one along in a fortnight.

I've been filling the time between tournaments by having a look at my recent stats. One of the things that I've noticed is that there's been an imbalance in the opening moves that I've been facing when I've had the Black pieces.

So, have I been getting these results because tournament chessers are more likely to open with the queen's rather than king's pawn? Am I normal? Or am I merely normally distributed?

I don't know whether maybe there's a fad for 1.d4, but my reckoning would be that over the last twenty years I've faced 1.e4 about three times for every time I've faced 1.d4.

It's possible, I suppose, that the theory-avoidance systems which appeal to a lot of club players (Colle, London System etc) tend to start with 1.d4 and so that might be having an effect. As you don't, I think, play either 1...d5 or 1...Nf6, you presumably wouldn't know whether those systems, rather than QGD and Indian lines, were intended.

I'm not sure d4 specials are driving things. Every d4 game I've played since the start of the season (i.e. September 2010) has featured d4 and c4.

I wouldn't be surprised if 1. d4, 2. other systems were pretty common at various levels, however.