You should never miss a mate in two 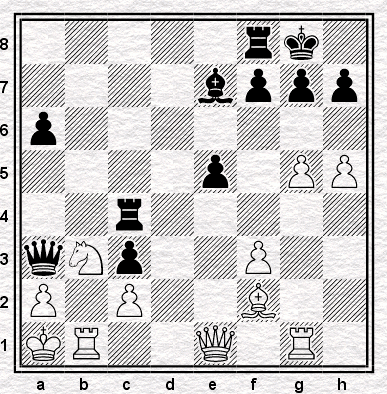 Tippleton v Horton, Cambridge 1992, position after 27.Rd1-b1
I wrote about this game a few years ago (spelling, I notice, my opponent's name wrong) and remembered it this week, since this is my week for missing mates in two. I played 27...Ra4 and after 28.Nc1, the game gradually slipped away from me. What I should have played, you'll be able to work out for yourself.

As, indeed, I should have been able to work out for myself, without any warning to say a mate in two was on the board. Shouldn't have made any difference: it was only a mate in two. It ought to have been easy enough to find.

In fact, I'd go as far as to say you should never miss a mate in two. You will, at one time or another, miss a mate in two - or even worse - but you never should. Any more than you should ever fail to hold a drawn king-and-pawn-against-king, or draw one that's a win. When I say a mate in two I mean your mate in two, rather than a mate in two available to the opponent: these things happen, and I take a more forgiving line on them. But not your own, missed mates in two: Mr Understanding turns into Mr Unforgiving. I don't care that there's nobody tapping you on the shoulder to say, hey, there's a mate in two: you shouldn't need it. You shouldn't, ever, miss them.

My reasoning is that, nearly always, a mate in two will start with a forcing move and will nearly always arise when you're on the attack. In other words, it's the sort of thing that you ought to be considering anyway. Rare indeed will be the occasion when the initial move comes as a complete surprise, and none of the examples in this piece fit that description. All right, a queen sacrifice is something of a surprise, you don't play one every day. But surely you would at least think about sacrificing your queen? If not, why are you playing chess in the first place?

I've been playing in the Aragón Individual Championship this week, not very well, though I did actually win both the games from which these diagrams were taken. Not, though, quite as elegantly as I might have. In truth I have rarely fallen over the line in quite such as clumsy and drawn-out fashion as I managed in my third round game, and even the denouement, when it finally and reluctantly came, was an embarrassment: 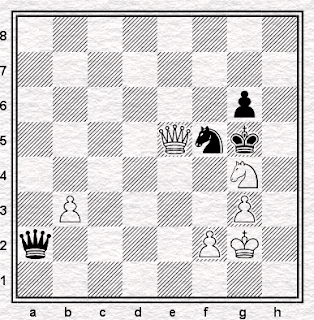 Horton v Mancho Fondevila, Aragón Championsip 2011, position after 54...Kh6-g5
I played 55.Qf6+ Kh5 56.Ne5 Ne3+ 57.Kh3 at which point Black resigned, and I was reasonably pleased with the way I'd finished the game, if with nothing else about it. Alas, later that evening the computer was to rob me even of that small satisfaction.

Once is happenstance, twice is a great deal more than coincidence. Two rounds later, after a rather swifter, as well as better performance (though it helps if your opponent only starts thinking when he's already lost) I did it again. 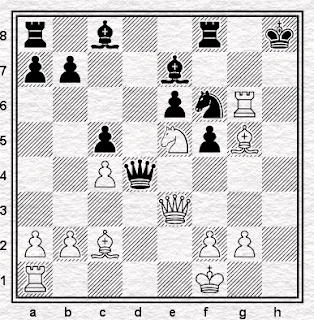 Horton v Navarro Castán, Aragón Championship 2011, position after 21...Kg8-h8
Here I continued 21.Qh3+ Nh7 22.Bxe7 Qxe5 23.Bxf8 and Black resigned, having lost a rook and looking likely to lose rather more rather soon. That wasn't too bad, I thought, on my way out of the room.

But it was, you know. It was really very bad indeed.

You’re right, it shouldn’t happen. But it does anyway. So instead of beating yourself up about it, you need to take a long hard look in the mirror as to why it’s happening. Cockiness in a winning position and therefore easing the foot off the mental accelerator? Time-trouble? Or not doing enough tactical exercises? You need to try to find the causes to reduce the problem, cos make no mistake, you’ll never eliminate it completely.
So what are you going to do?

As a suggestion, apparently the Polgar tactics book is just full of mates in two. Once you’ve mastered those, the book can be hollowed out and used to house a family of four.

So instead of beating yourself up about it, you need to take a long hard look in the mirror as to why it’s happening

An idea which I am sure has never occurred before to EJH. Who'd a thunk it?

I have to say if it was me I wouldn't be that bothered about missing either of these. You don't need to see more than one win.

On the other hand I can see that missing ...Qxa2 must have been a little vexing!

I think it's worth saying that in two of the three examples, I had plenty of time. I certainly played 21.Qh3+ after quite a long thought. Mostly because I was also considering 21.Rh6+ but also because I did in fact look at 21.Bxf6+ - and didn't see that this put the queen in on h6. Ugh.

"An idea which I am sure has never occurred before to EJH. Who'd a thunk it?"

Yeah, sounds kind of obvious, doesn't it? I know lots of players though who will blame a bad game on lots of things, but rarely themselves. "If my opponent hadn't played X opening, if the time limit was different etc."

Self-analysis is something that's hard to do honestly.