Does It Float?: Dutch Assault

After one of my own ideas in the first instalment of this series, let's look at one which has been seen at grandmaster level. I know, right? Up there breathing the same air as the Tartars, the devils. 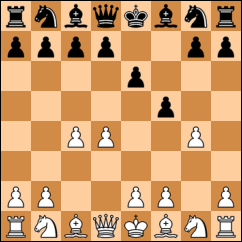 In October, on the only occasion I've been allowed to trot this out, Rick McMichael chose not to nab it and got into serious difficulties after 3...Nf6. As in Efimov - Naumkin, I consider taking the pawn followed by 4. e4 to be the critical line. After that, black has a fairly straight choice between 4...Qh4 and 4...d5.

I've no idea if it's any good under serious examination, but Tigran L. Petrosian has given it a go. And if 2650s like the look of it, I'm happy to follow suit. I was always told that e4 is the critical square in the Dutch and, if you remove that from black's control on move 3, that must be worth something, right?

Chess should be fun. Give the Dutch Assault a go and feel the glee.

I was wondering whether there was any mileage in 4...Bb4+ rather than either of the two options you give. Black may be able to force a White piece to go somewhere it didn't really want to be, and may also be able to put the queen on g5 should that prove desirable.

I had a similar thought to ejh. Isn't it better to punt g4 without c4? Or is the c4 pawn just there to give black a sporting chance?

Does the b1 knight not belong on c3? In addition, the queen can quickly come to b3. You'll notice I've deliberately ordered black's moves - 1. d4 f5 2. g4 may be better.

On 2. g4!?! (his punctuation) he says "Contact the homicide department. Black must engage in self-defence. 2...fxg4! If black declines the idea has already suceeded...3.h3 d5! 4.hxg4 Bxg4 5.Qd3 Nf6 6.Bh3 Bxh3 7. Nxh3 Nc6". A.M. says he is following Schwarz in his 1964 Hollandische and after looking briefly at 8. Ng5/Bf4/Nf4 comments "I wouldn't like to say what's going on in [this] position. With the threat of Ng5 everpresent White will always have some chances. Perhaps a real man would like to try it out."

1.d4 f5 2.g4 fxg3 3.h3 g3 4.fxg3 and we reach by transposition a mainline of the chess variant where white starts with three tempi and neither side have an f-pawn. White's kingside would be safer if pawns could move backwards.

Simon Williams' Classical Dutch book has a lot on these lines.

A "not" missing from that sentence, I think.

Am I to understand that while my back has been turned somebody has written a post on how to duff up the Dutch Defence?

Seems to me that if a Dutch player prefaces his intentions with 1. ... e6 that 2. g4 might change the direction of the battle a little...

The sequence 1 d4 e6 2 g4 has been tried in a handful of games with 2 .. d5 being the most popular reply. Worth a punt at quick time rates I'd imagine, although familiarity with both the Catalan and Basman set-ups presumably an advantage.

If Black goes all old-fashioned and plays 1...f5 instead of e6, 2.Qd3!? followed by 3.g4 no matter which pawn Black moves is interesting. The weaknesses on h7 and g6 are interesting to play against. I played this about 4-5 times last season at normal time controls against approx ECF170 opposition and achieved perfectly good positions. Black must play d5 early, other setups can run into trouble. Not sound of course but highly entertaining.