Today we return to the then Elaine Saunders and her meetings with Alexander Alekhine, as discussed in her obituary, published in January in the Times.

Yesterday we saw how Elaine herself wrote about the game she might have drawn against the then World Champion, in a passage quoted by the Times obituarist, but nevertheless not identified by them. We begin today by seeing how it was, reported in CHESS: at least, according to the obituary. 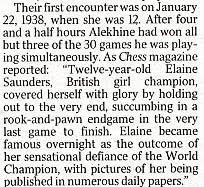 It's a quote of two sentences and the first sentence is straightforward enough.

Twelve-year-old Elaine Saunders, British girl champion, covered herself with glory by holding out to the very end, succumbing in a rook-and-pawn ending in the very last game to finish.

That's indeed what it said in CHESS, and here is the original, from 14 February 1938, to prove it. 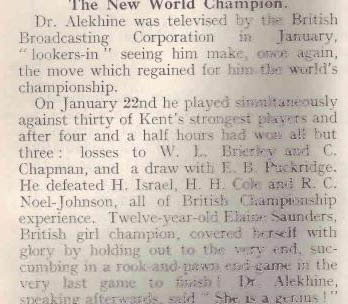 Strangely, though, the passage, in the original, doesn't proceed (as it does in the obituary) "Elaine became famous overnight", but continues instead with Alekhine's "she's a genius" compliment, which in the obituary, only appears rather later, almost at the bottom of the subsequent column.

In passing, it's not clear whether that "BBC interviewer" is a piece of licence on the obituarist's part, since although CHESS says that Alekhine "was televised by the British Broadcasting Corporation in January", it neither says definitively that the "genius" comment comes from that appearance, nor mentions any interviewer. But never mind that: where is the second sentence of the quote in the obituary? Where is this line?

Elaine became famous overnight as the outcome of her sensational defiance of the World Champion, with pictures of her being published in numerous daily papers.

It's in quotation marks in the Times and hence we assume that it's a quote. But it's not there in the original. 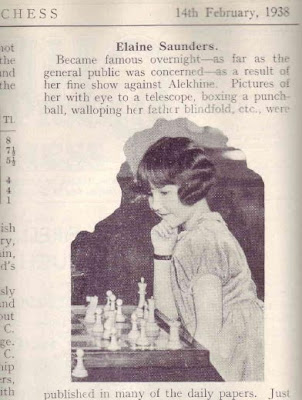 As we can see, it isn't a quote at all. It's a paraphrase. It begins with "Elaine", all right, and then takes "became famous overnight" directly from CHESS. After that, practically everything has been changed.

as a result of her fine show against Alekhine

in the original becomes

as the outcome of her sensational defiance of the World Champion

But there is no indication that it's a paraphrase. The new sentence is presented as a quote, and there are neither any ellipses for omitted words (e.g. "as far as the general public was concerned") nor any square brackets for paraphrase or précis (e.g. when "pictures of her being published in many of the daily papers" replaces the much longer phrase in the original).

How odd. It's possible, of course, that there has been an error at the Times and that the quotation was supposed to end at "finish": that the sentence beginning "Elaine" was the obituarist's own commentary, properly located outside the quotation marks. Or the author may have misplaced them.

Office error? The Times would have the original text that was sent to them and would be able to say. Author error? The author is free to say so.

But if either of these explanations is correct, the author would still need to explain why they borrowed from the original for their paraphrase. Either something has been copied, or something has been deliberately presented as a quote when it was not. Whichever way you slice it, something is not quite right.

Still, good work to refer dirctly to the 1938 article. Provided that the author actually did so, and didn't borrow it from an online site where it is quoted, such as, once again, Edward Winter's Chess Prodigies

[please click to enlarge]
or otherwise the same author's Chess Note 3817. One wonders, again, whether it is possible that a researcher saw articles from the 1930s press, but not a prominent and topical online source.

We may also wonder whether the obituarist saw Sarah Hurst's article "Elaine: a 10-year-old World Chamnpion" which was published in CHESS for October 1997 and in which the "she is a genius" line of Alekhine's (which, of course, appeared in a rather earlier number of the same magazine) can also be found. 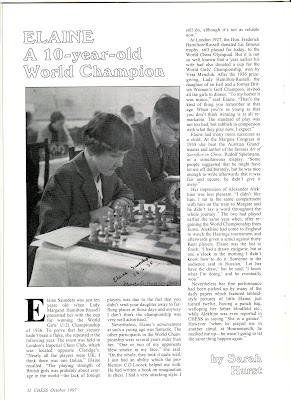 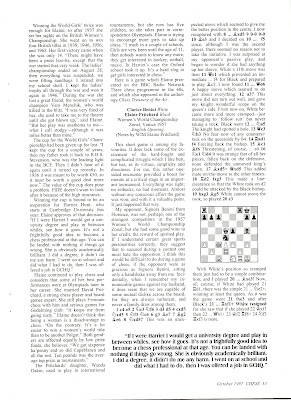 Why may we so wonder? Because the obituary's account of Elaine's view of Alekhine

is taken directly from that piece.

Or perhaps not quite so directly, since in the obituary, it's presented as a single quote: whereas in Hurst's original article, it is actually two separate passages, the first opening one paragraph

and the second closing the paragraph following.

On the other hand, the two separate passage are conflated here, as they are in the place from which it directly borrows. The entire quote (or quotes, if one prefers) can be found on the internet.

Though not without ellipses, or attribution, neither of which are present in the obituary.

So whether Hurst's piece was consulted directly, or secondhand, we can't necessarily say. But what we can say is that the passage in the Times appears to have been copied from Hurst in CHESS. But that latter piece has not been cited. Which, I think, it ought to have been.


[Comments are welcomed, but please be cautious in what you write and remember that the piece under discussion is unsigned.]
Posted by ejh at 7:55 am

I've got to say, Justin, I suspect you're in a minority here. Newspaper obituaries aren't works of scholarship and don't quote sources, and I don't really understand why it matters where the obituarist finds quotes as long as they're not actually made up.

Perhaps it's just me. To make up for my philistinism, here's Gerald Abrahams on Alekhine and simultaneous displays against children.

[GA does Alekhine some trifling service in 1936]

"He said: "If I can ever do something for you, please ask me". I replied: "You can do something for me." He raised an interrogative eyebrow. I said: "Be more considerate to small boys." The frozen blue eyes stared at me for some seconds. "Yes," he said, "I remember. Liverpool 1923. You had pawns, bishop and knight, against my pawns and two knights. You should have drawn that game."

Let us see how far this is true. It may certainly be true to some extent. It may not be true regardless of the degree of the copying.