Towards the end of the obituary that has been the subject of this week's blogging, there is a quotation from a previous chess correspondent of the Times.

Harry Golombek (surely, strictly speaking, an honorary grandmaster, but we'll get back to that) is quoted thus:

But where and when did Golombek say this? Where did he thus "summarise" Elaine? In a chess magazine? On the phone? To his mates down the pub? Unfortunately the obituary does not tell you.

Fortunately, we can: he said it in Golombeks's Encyclopedia of Chess, Golombek (ed.), Crown Publishers*, 1977, in which there is an entry on PRITCHARD [née Saunders], Elaine on pages 247 and 248.

The original piece does not seem to appear on the internet - or didn't, before today - and hence we can presume that on this occasion, the author has certainly read the original, of which the relevant section appears below. 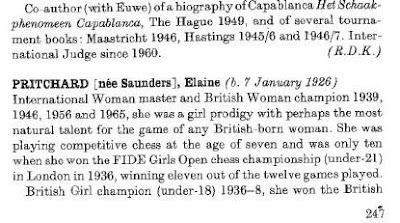 There is our quotation, in the very first line.

Does it matter at all if the Encyclopedia goes unmentioned? It is a very short quotation and it is, after all, correctly attributed to its author.

I don't think it would matter, or not very much (on the other hand, why not just say where the line comes from?) were it not that this minor sin of omission is not the only one. Because Golombek didn't say Elaine had


perhaps the most natural talent for the game of any British born woman.

which is not quite the same thing. Even if the obituarist thinks it it is, it would be proper to include the "perhaps" so that the reader is not given a inaccurate impression as to what Golombek actually said.

Nor is it the only time in the obituary - to put it mildly - that what appears as a quotation is, for one reason or another, not really an accurate quotation. Here the "perhaps" is omitted in order to sex up the quotation a little, to exaggerate a touch, to make just a little more of the line (as of Golombek's honorary title) than is strictly speaking justified.

Small things, yes, but small things add up, and add up here to a strangely disrespectful way to treat the work of a old Times correspondent, in his own paper.

Well, I'm with you here, Justin, omitting this 'perhaps', fundamentally changing the sense, is lazy and dishonest.