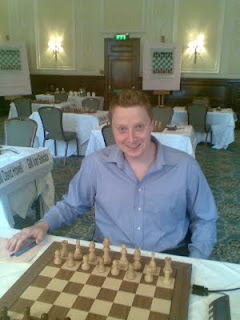 If you're going to release a new DVD I supppose it doesn't hurt if you score the best result of your life the same weekend. Last Friday I received a review copy of Simon Williams' Crash Test Chess II: Thinking Outside of the Box and then just a couple of days later the GingerGM knocked over recent World Championship challenger Boris Gelfand at the European Club Cup.

Williams says his DVD covers, "some amazing moves, some interesting moves, some unusual moves ... basically some very funky stuff", but I'll get back to that next week. Today, we'll stick with how he smacked up the Gelfmeister.


Well that wasn't too shabby was it boys and girls? Three questions:-

1.
Is this the best individual result achieved by an English chesser playing Black since Miles beat Karpov?

2.
Is it interesting or amusing that Yankidoodle world number five Hikaru Nakamura bottled Williams' Classical Dutch yesterday and opted for the Exchange French instead?

3.
(Bit of a preamble for this one)
Williams' win over Gelfie was highly reminiscent of his 2003 defeat of Romanian GM Dragos Dumitrache.  Actually, move White's queen back to d1 and return Black's bishop to e7 and the position reached at move 11 in Sunday's game would be identical to the earlier one at move 10.

Have a look at that game from Montpellier ten years ago.  28 moves and White doesn't move his queen once.

Is that a record?

I would imagine there have been many wins with Black by English GMs over top opposition since 1980. In terms of shock value, there was that Ivanchuk - Adams game in Spain before Adams was top twenty. This had Mickey getting his move order wrong according to established theory, but in the process spinning off a new major theory line in the Marshall.
RdC

Overcoming a rating gap of 240 points, against a super-grandmaster, is out of the ordinary though - with White or Black. So if we're talking about opponents rated above 2700, say, which wins by English players rated 240 points or more below their opponents can people think of? With White or Black?

(I don't suppose we have to go back to Penrose-Tal* - there must surely be examples from the Seventies and Eighties - but which ones?)


[* Before Elo ratings anyway, I know, but it came up in email correspondence between JB and myself last night and I thought I'd mention it.]

Is the incorrect link for Invanchuk-Adams some incredibly clever joke, or an almighty ....-up?

I was answering question 1) of the blogpost. Aronian is stronger than Gelfand.

Yes, but McShane is 200 points higher-rated than Williams. That's got to count for something in the comparison of their achievements.

It's a reasonable point though. Highest-graded opponent beaten is a way of answering question 1.

But it's curious that we still don't have any candidates for the rating-gap-against-a-superGM question.

Craig Hanley beat Sutovsky with Black in the first round of Gibraltar this year: http://www.chessgames.com/perl/chessgame?gid=1654432.

Of course, discussing great wins by English players as Black against super GMs, this game has few peers. (But I don't suppose the rating gap was quite of Gelfand-Williams proportions.)

From the horse mouth:-