We are investigating Antony Rosenbaum’s chess painting of 1874-80, in the collection of the National Portrait Gallery, and now hanging at Bodelwyddan Castle in North Wales.

It is a composition of 47 portraits, plus extras. We saw who they all were last week when, and with the help of The Chess Monthly’s contemporaneous account of its unveiling (on 30th October 1880), we noted some of the wry incident that the artist had also introduced into the picture. It is not merely a stiff posing of the chess great and the good, or stuffed shirts as we might say these days. No, it is a staging of Cecil B. DeMille proportions showing Team London engrossed, in the main, in an inter-city consultation match of three games, with a fair bit of by-play off the board. And on that particular point, note that the three positions Rosenbaum has put in are all entirely reasonable ones, as one would expect from a chess in artist.

In the first diagram Bird and Blackburne et al (top left in the picture itself) are playing the white side of a Ruy Lopez (perhaps the opposition will tease them with 3...Nd4). In the second Steinitz, Zukertort and friends (top right) have got themselves on the black side of some kind of a Vienna Gambit (an oblique reference to the 1872-4 London-Vienna telegraph match, maybe; or even an imprecise rendering of the game given last week). The third diagram is the position in the foreground of the picture, and is a few moves into an ancient Allgaier Gambit. No new-fangled English 1.c4 anywhere, as in the above-mentioned telegraph match in which Steinitz and Potter were the main men for London - they are near neighbours at board two.

This third game seems to be several tempi ahead of the others. Note also that not one of the professional chess heavyweights is attending this board. Perhaps this is suggestive as to the evolution of the painting itself: i.e. this may have been the centre piece of the stalled 1874 effort, when Rosenbaum essayed a composition with a few (well, 18) of his chums, intended as a competition prize in the City of London Chess Club (as said the first Chess Monthly report).  As he amplified the scope of the work during the later years of its gestation, he might then have added the other boards to accommodate the big boys.


Rosenbaum also put in some historical references along the back wall, which shows again that he knew his chess. This is how The Chess-Monthly put it:

“On the wall hang two pictures, portraits of Morphy and Anderssen; faint medallions with busts in relief represent, or assume to do, Ponziani, Lolli, Stamma, and others, at least Mr R. challenges any one to disprove the fidelity of the likenesses”.

Morphy wasn't yet dead (not until 1884), but as he had never been resident in London he seems only to merit a portrait (at second remove) on the wall rather than one in the body of the kirk, and it looks to me as if it was copied from this image of Morphy playing de Rivière in 1858. You can even just make out the chess set.

Anderssen (dead in 1879) gets the same treatment and - as you are now going up the wall  - note that The Chess-Monthly was slightly askew with its list of the “faint medallions”: they are in fact, when read left to right: Evans, Lolli, Stamma, Salvio, Phildor and Ponziani is nowhere to be seen. Staunton had died in 1874; had he managed to put it off for a few more years he might also have been on the floor in person rather than on the wall in spirit.

Up at the back there are also “placards with the conventional club notices and comical inscriptions” as the commentator put it. Once again Rosenbaum shows his sly sense of humour;  one might say at his own expense. One of the “placards” alludes to some bad blood in London chess circles of the period in which Rosenbaum was himself one of the main players: the formation of a breakaway, and short-lived, “West End Chess Club.”  The “placard” is an “in memoriam” notice for that "late" club (as it had been referred to in The Chess-Monthly in February 1880) and he placed it beside himself on the wall. More of this later when we put Rosenbaum under the microscope.

There is also another intriguing touch – seen better when examining the picture in the flesh (with a torch) – just to the right of Gümpel (he is standing in the back row).

Under a magnifying glass it looks very much like a reproduction in miniature - a picture within the picture - of this: 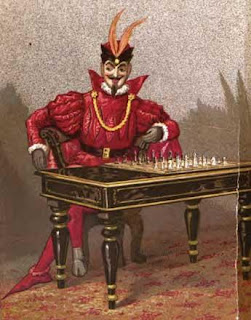 It is the illustration that Gümpel used in his book of  “Mephisto. Exhibited at the International Theatre Exposition Universell, 1889”,  and as it was copied by Rosenbaum in 1880 it must therefore pre-date the expo itself by almost ten years.

So Rosenbaum honours the inventor of Mephisto by slipping in a facsimile of an illustration of his automaton, in full devilish regalia, just adjacent to him. And this raises the intriguing possibility that in this beneficient society of gentlemen where business and chess interests must have commingled to mutual advantage, Gümpel might have commissioned Rosenbaum to originate the Mephisto illustration we see above; and moreover, Mr R. might have created it before its insertion, in copy-miniature, on the wall. Possibly Gümpel's book itself might have a clue as to who created the image, and when, and settle the point.

There are several of Mephisto’s victims in the painting. Indeed at the unveiling of the infernal contraption in 1878 Colonel Minchin,  Hirschfeld, and William Norwood Potter (1840-1895) were defeated by it, and several of the others in the painting lost subsequently, at some time or other, including Rosenbaum himself.

It is well established that Mephisto's chess brain power was mainly provided by Gunsberg in its early days. He operated from a room adjacent, communicating by way of some electrical wizardry of early vintage. As a consequence he would have had to be absent from the assembled company. So, perhaps the omission of Gunsberg himself from the picture is deliberate, and another little joke by the artist. Not so much Red Devil as Scarlet Pimpernel: Isidor Gunsberg always seemed to be somewhere else.
That apart, it is odd that Gunsberg is omitted – as is another significant figure (and another of Tim Harding's Eminent Victorian Chess Players) in the chess politicking of the time, the Rev Arthur Skipworth (1830-1898), though his rival power base was in the provincial chess scene out of . Another prominent player, Amos Burn (1848-1925), doesn’t appear either, but, as J.H.B. notes in his 1926 BCM obituary for Burn’s death in 1925, after his tournament victory in 1876 (at Cheltenham) Burn didn’t re-appear on the domestic chess circuit until 1883, presumably because his business interests took him abroad. What with Rosenbaum’s illness until 1877 it would seem that Burn out-of-sight put Burn out-of-mind, and thus Burn out-of-picture. BTW in the obit J.H.B. mis-dates it to 1882.
Another omission from the party was one J.O.S.Thursby esq., possibly on account of his youth - he was born in 1861, and was student at Cambridge in the very late 70's and 1880. By then he had already made his mark on the chess scene, and was destined to make an even bigger one, as we will find out next time.

The Missing Persons Bureau may also like to post the absence of others: "Fighting Reverend" Charles Edward Rankin (1828-1905) (the "most saintly" of them says Tim Harding); and Lord Randolph Churchill (1849-1895), in connection with whom "saintly" isn't the first word that springs to mind. Students of this period of chess history will no doubt be able to nominate other significant AWOLs.

The Chess-Monthly’s first account of the painting’s career (“first” because there was another, subsequently) mentions Zukertort’s blindfold display at the end of the afternoon..

At about four o’clock Mr Zukertort commenced his blindfold performance in the same room. He played simultaneously eight games against Messrs. Belajeff, Gumpel, Mann, Minchin, Salter, Shaw, Tinsley and Warner. The single player had to surrender to Messrs. Minchin, Warner, Shaw and Belajeff – the latter we compliment on his successful reappearance in the Chess world. The other four games were won by the blindfold player.

In his column in BCM in October 1980 “One Hundred Years Ago” R.N.Coles gives one of Zukertort’s wins sans voir – against Samuel Tinsley; you can play it through below. Not knowing the then whereabouts of the painting, Mr Coles wondered “if [Rosenbaum's] picture survived or met as sticky an end as Sutherland’s portrait of Winston Churchill.”  Winnie, of course, was the son of the above-mentioned Lord Randolph. 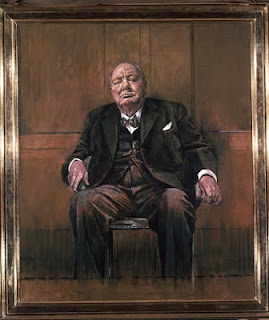 Was Mr Coles implying that Rosenbaum's portraits were as unflattering as Sutherland's effort was alleged to have been - by Mrs Churchill anyway? She trashed it. Whatever. As we now know: Rosenbaum's gallery of mug-shots survived.

We can't finish this episode about missing persons without mentioning what must be staring everyone in the face about Mr R's painting: the fact that staring back is not one female. Nowhere. Not as a chess player.  Not as a guest on the arm of a gent. Not even in a serving role (even the waiters are men). These days that would be considered, and rightly, nothing short of scandalous. But that was then. And as this is now, we'll try and do something about it, next time.

Acknowledgments
Gunsberg image from Chess Archeology, sourced from The Games of Gunsberg's Chess Matches with Tchigorin and Steinitz, p3, 1891, (Morgan's Chess Library, book 8).
Burn comes from the book of the 1895 Hastings Tournament, on line here.
Churchill's Portrait (1954) by Graham Sutherland from Gallery of Lost Art
Thanks to Batgirl, for the use of the Mephisto image, and for her Mephisto intelligence.
Morphy - de Rivière comes from Wikipedia Commons. It was published in L’Illustration, journal universel, probably 25 September 1858, according to Winter's Chess Note 7604.
The telegraph match is covered in Tim Harding's Correspondence Chess in Britain and Ireland, 1824-1987.
pub McFarland (2011)

Link to earlier episodes, and those subsequent to this post, via the blog's History Index
Posted by Martin Smith at 11:00 am

I agree that often what's no there can be more intriguing than what is there. Gunsberg might be lurking behind the Mephisto image. All the interesting observations made my head whirl.