Here we are, back on the case of the telegraph match painting, featuring no less than 47 portraits of chess clubbers of the 1870s - you can find out who they all are in this earlier episode.

We are following the reports in The Chess-Monthly of its unveiling in 1880 and, as we are about to find out, its expeditious disposal.


When the painting was revealed at the séance at Dr Ballard’s residence on the 30th October 1880, one would suppose that the feeling among the assembled chess fraternity would have been that it should find a decent home within their ranks. But as any, and all, of those gentlemen would have fancied installing in pride of place over their mantelpiece, how then should the sale be fairly arranged, and how should they make sure that, in so doing, Mr Rosenbaum’s marathon exertions would be properly rewarded?

The conventional recourse would have been to a private auction, but that might have given an unfair advantage to those well-heeled members with the ready means. It would also set one colleague against another, and leave to fate the ultimate sum realised, risking red faces all round. Surely a more reliable, and egalitarian, mechanism had to be devised.

The Chess Monthly explained what would happen...

“Mr R. also exhibited autotype proof copies, retouched by himself, in monochrome, size 25 inches by 13, of which only 40 will be published at £5 5s. each. Other copies will shortly be published at £2 2s, £1 1s and 5s each. The picture will raffled among the subscribers to the 40 £5 5s. plates – id est, each purchaser of a copy receives a free ticket in the raffle”.

…which was fair enough. Fair enough, that is, for anyone who could get their hands on the five guineas necessary. That's a cool £500 at today’s prices: a lot for a raffle ticket by any standard, even if you got a sort of Victorian-style photocopy thrown in. However, as long as all were sold it would provide Mr R a tidy reward for his toil, and honour would be satisfied.

“Considering that the picture, without reckoning that the three years’ labour, cost Mr. R. close on £100, this arrangement met with so much satisfaction that already over 30 names are on the list, and that it is therefore very probable that before another fortnight elapses, and the ultimate possession of the picture decided, the last copy will be allotted.”

As indeed it was. By the day of the raffle, the 3rd December, five weeks after its unveiling at Dr Ballard’s, all the copies had been sold, the raffle tickets had been thereby allocated, and Mr Rosenbaum would have grossed (by simple arithmetic) at least 200 guineas (that’s £25K, or $40K, today), handsomely covered his costs, and be paid for his labour. Capital.

The picture had been on display at Simpson’s and by four o’clock everyone was foregathered at Mr Gümpel’s residence in for the raffle. In a proper and business-like manner a committee had been constituted to determine the procedure for the draw, and very ingenious it was too:

“Instead of the usual method at raffles –  thirty-nine blanks and one win corresponding to the forty names of the ticket holders – Mr Cubison suggest a simple and more interesting mode of procedure, which was accepted, viz, to draw only the names, the name drawn last to be the winner.”

This provided for lengthy and tantalising fore-play during which all would be on tenterhooks, amid feverish and mounting tension, until the fortieth, and successful, name was climatically released from the hat: exquisite gratification, deliciously delayed, satisfaction guaranteed. Compare that with the dull fare of so many village fêtes the length and breadth of the land where you had to make do, after a perfunctory rummage, with a first-dip quickie.

And so the fun began.

And for some it fizzled out, and prematurely…

…but let's leave the gents at it for the moment. While The Chess Monthly prepares to tell us who won, reflect on the fact that, as we mentioned last time, there is no mention of the ladies having been invited to the party. Indeed, not one has appeared thus far in this series (save for one from across the pond who has occasionally joined us in the comments box, and is most welcome). But the mention of the Ballards (confusingly both father and son were "William") does, however, give us the opportunity to introduce a modest corrective. The host, Dr Ballard Junior (1848-1933) - you can see him trounce Bird, on an off-day, here - had a younger sister: Louise Matilda (1850-1931).
Better known under her married name of Fagan, she was a strong player, good enough, as her obituary explained, to come second to Mary Rudge in the Ladies International Tournament of 1897, and to win a club tournament against 12 chaps in India (she had married an Irish Bombay Lancer), playing her games elsewhere as she was banned from the premises (membership was, as is now familiar, strictly “men only” and rules are rules).

She was, so the BCM said in 1897, "a prominent worker of the Women's Emancipation Union...she is a woman of broad sympathies and profound convictions...and is a member of the Fabian Society". And indeed here is a record of her Fabian Society membership from 1890. Note that the address is 26, Manchester Square, the Ballard residence, where the painting had been unveiled ten years previously. 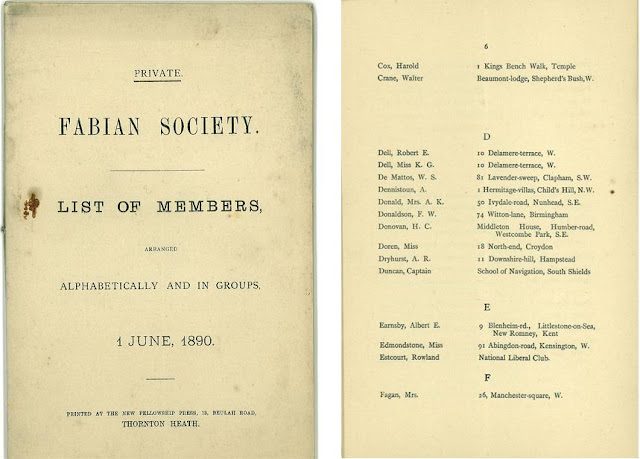 This all makes a refreshing change from the politics of the other company that we have kept in this series. In the game below she chews up an unfortunate male of the species, George Richmond, in 1897 (maybe).

By the way, back at the Fabian Society, notice that five of those 16 names are female - not 50%, but a good deal better than the typical chess club of the day whether in India, or England. And there's a nice footnote: you may have heard of illustrator Walter Crane (whose name appears near the top of the same list), well here is his contribution to chess in art, an illustration for The Tempest, published in 1893, sadly too late for Shakespearean scholar Howard Staunton to enjoy. 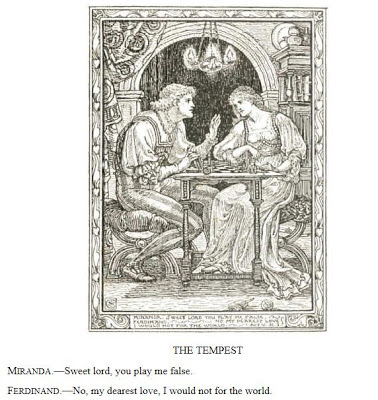 Back at the raffle. Where, even if your name was pulled out of the hat early in the proceedings (the fate of both the Williams Ballard) there was still hope of a satisfactory outcome by way of a wager on the eventual winner:

“…selling and buying chances and some brisk betting were freely indulged in, and kept up the excitement.”

The final moment was near:

“Thirty-six names being drawn it was curious to note that the holders of the four remaining were absentees thus giving a flat démentie to the proverb “les absents son toujours tort.” This time they were right. The last two rivals were Mr Hirschfeld and Mr Thursby"

and, yes, it was…
...Mr Thursby who “carried off the coveted prize.”

So, J.O.S.Thursby Esq., not yet twenty, and still a student at Trinity College, Cambridge, was informed by “wire” of his prize, leaving the remaining gentlemen smiling paternalistically, one imagines, at the good fortune of the young whippersnapper who, having the spare cash for a ticket (should we be surprised: he was an ex-Etonian) had won the raffle, even though he hadn’t been present and, more galling still, even though he wasn’t in the painting.

You’d need a drink after that, and The Chess-Monthly coyly reported that a dozen of the gents trooped back to the Divan for a “little dinner party” - its two editors (Hoffer and Zukertort) chief among them, and we can suppose that Mr R, with 200 guineas in his back pocket, was called on to pick up the tab.

But what of John Ormerod Scarlett Thursby: the lucky winner? We have a lot to thank him for, as we’ll find out next post, but in the meantime ponder this: there is a reference in the above account that is worth your pause, viz: 40 "autotype proof copies, retouched...in monochrome" were made of the picture, sold at 5 guineas a piece, and possibly a number of cheaper ones as well. So, it is reasonable to ask: do any still exist? And if so: where might they be now? Could it be that somewhere, in a bottom drawer or library basement, some might be awaiting discovery?

In fact: does one hide, at this very moment, in the depths of your Club’s equipment cupboard?


Acknowledgements etc.
Thanks to Giles Wright, Membership Officer at the Fabian Society, for his generous assistance; and to Sarah Beth for some Mrs Fagan hints.
Illustrations to Shakepeare's Tempest by Walter Crane 1893 is on-line here.

See the three earlier (and subsequent) episodes via our  History Index

I'm glad to learn Mr. Rosenbaum made a tidy sum for his efforts. It's also refreshing to find that nearly a century and a half later that his painting, although largely forgotten, can inspire such a wonderful and intriguing tale. Thanks so much.

Nice to hear from you again, Sarah.

The tale meanders on for a few more weeks yet!

Good! I'm looking forward to seeing where the road leads.