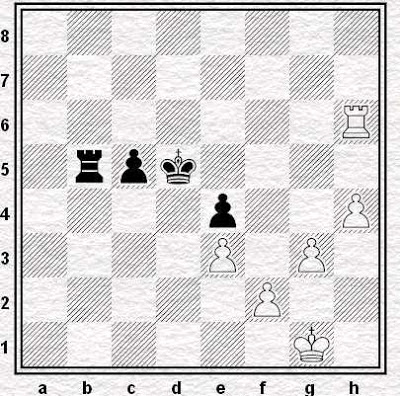 Here I had a long think.


I found this game, and Speelman's comment, when I was rummaging around a quarter-century old magazine. I didn't really think it looked like a position that needed a lot of thought, but then I read Speelie's notes and found out how wrong I was.

Spess, I suppose, had the luxury of a generous time control. A shade under two hours to play the 18 or so moves that would take him to the time control at move 60 and after that the game would be adjourned rather than be played to a finish.  An embarrassment of riches compared to the amount of time amateur chessers get to play out similar positions these days.

I don't think that's the reason that most players around my strength wouldn't spend too long here, though. I think, it's more an attitudinal thing. It's just a rook ending, after all. 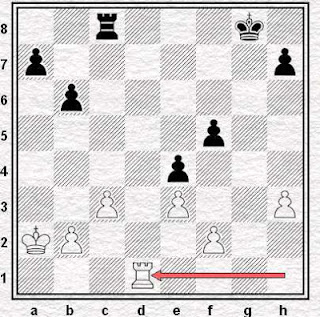 I reached this position a week ago during the Surrey v Essex u-180 county match. I'd been under pressure and played a mini-combo - a five-move forcing sequence - to get this ending, although I had overlooked that White could play his rook to d1. It is, of course, infinitely preferable to Rg1+, the move I expected when considering my 24th move.

No problem, I thought. I can cover the seventh rank with my rook, bring my king to the centre and all will be well. I had 14 minutes to make it to the time control at move 35 and I used precisely one of them to make this decision. So I played 29 ... Rc7 and quickly ended up in a difficult position. Too difficult for me, anyway, and I went on to lose.

In the coffee shop a few days later I showed the game to Angus. After a moment's thought he said, Can't you just ...? and proceeded to suggest the plan that I had tried.

A drink and a Portuguese custard tart later, we came up with a couple of alternative ideas for Black. How about sacrificing a pawn with 29 ... Kf7, 30 Rd7+ Kg6, 31 Rxa7 to get the rook active with 31 ... Rd8? (although we later thought 31 Kb3 first would be an improvement). How about - Angus's suggestion, this - trying to get at White's loose pawn with ... Rc6-h6? Neither of these even crossed my mind during the game. 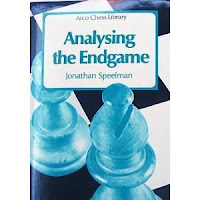 There was a problem with the clocks at Coulsdon*, but that's not why I rushed my move. There was a certain time pressure (partly due to my own clock handling bungles earlier in the game), but I still had 14 minutes left when the game ended at move 65.

So not zeitnot, then. I think it was more a combination of failing to consider the importance of relative activity of the rooks - Random Rook Endings III - and not grasping that "just" rarely applies in rook endings.

Whether a different choice at move 29 would or should have led to a different result I don't know. Maybe if I'd paused a bit I would have ended up playing the same move anyway but made a different choice later on.  If I'd been thinking I might, for example, have tried sacrificing a pawn after 29 ... Rc7, 30 Rd5 instead of defending passively with 30 ... Rf7.

If nothing else I could at least have made it more difficult for my opponent, rather than walking meekly to my doom. Sometimes, even in the middle of an apparently simple rook ending, it's worth having a bit of a think.

* I was told the time control was 35 in 100 minutes, plus 20 minutes to play the game to an end with a ten second increment from move one. Ten second increments are bullshit anyway, but around the time we reached the rook ending it became clear that the increment was in fact not being added. The board next to mine stopped playing for about 10-15 minutes while they fixed the clock. My opponent and I carried on with me expecting that there would be no increment at all.  Actually it kicked in at the point when the extra 20 minutes was added (which turned out to be move 43). It's not really relevant to today's post, but those digital clocks are utter shite.

Regarding the clocks, your complaint should be addressed to the person who selected the settings on the clock, or who devised that time control in the first place. Arbiters have a hobby horse about not adding time at the time control when using digital clocks which means you have to appear to lose on time to get the extra time added. This is an any move number, not 35 as supposedly specified. They are very obstinate on this, which means that intermediate time controls are best avoided if you want the clock to indicate the time remaining. So county matches would be 120 minutes with 10 second increments. If venues could accommodate it, the FIDE standard of 90 minutes with 30 second increments could be used.

There's been a design fault with DGTs since they were first introduced nearly twenty years ago. For cost reasons, they used a four character display(hours:minutes
) which means you cannot see at a glance whether or not the increment is being added.

I was assured that all the clocks were set in exactly the same way. That may or may not be true, but anyway I see a clock that's confusing to set as being badly designed rather than the fault of the confused setter.

I agree with you about the person/people who chose the time control in the first place, though. An incomprehensible decision.

Outlawing digital clocks would be one of the best things FIDe could do for the game.

Abolishing arbiters wouldn't be a bad idea either.

On the rook ending, and on the basis of the usual two seconds' reflection, ...Rc7 and ...Rf7 still looks the most natural to me. Then bring up the king and then, er, well, then try and get active somehow. No doubt your thoughts at the time exactly. How did the rest of the game go? And how did Spess' game go, for that matter? It looks pretty difficult to me.

More on Spess next week. The rest of my game I'll add here when I get a moment - probably tomorrow night. In short, White got a passed c-pawn and pushed it.