Have you ever had one of these? 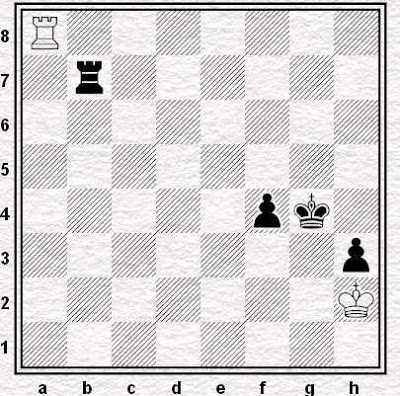 For somebody who thinks he isn't playing much chess, I've had a fair few rook endings recently. What I haven't had so far this year, what I've never had in a graded game for that matter, is rook plus f & h pawns against lone rook. I did get it once in an internet blitz game (and drew it on the weaker side), but that hardly counts.

I know a couple of people who've definitely had this ending. Curiously both had the pawns and both received draw offers from their opponents. Which strikes me as a bit optimistic of the defenders to say the least.

What about our esteemed and valued readership, I wonder? There must be someone out there who has some experience with this ending.

Anyhoo, while you look back through your old scorebooks/databases, enjoy Anand - McShane from last year's London Chess Classic. Keep an eye out for the exchange of blunders on move 90. More on them tomorrow.

My team mate Martin Taylor (what's happened to him?) failed to win it with great ease towards the end of the seventh hour once. I didn't notice how.

There used to a very good online resource building up the defence from first principles. Unfortunately (well, according to some gurus on chesspub who know a whole lot more than me about this stuff) the analysis was wrong. Still, apart from that it was very instructive.

I can't remember - is this all on one of Pogohosyan or micawber's marvellous tutorials at chesspub?

I'm one of the two people known to Jonathan who've had the ending. I remember this because when it occurred, it was, by chance, not long after I'd happened to read - don't remember where - that the way to try and win the ending was to sacrifice the h-pawn and go with the f-pawn. Which, on the day, worked.

I don't know what you're supposed to do if the opponent is unsporting enough not to take the h-pawn. Or indeed how to defend the ending. One of these things I've been intending to look up and learn for thirty years or so.

(My opponent did indeed offer a draw when the ending arose, on the grounds that it was a theoretical draw. They weren't entirely pleased when my failure to accept their offer was followed by their failure to demonstrate that they knew how to draw it. But I don't particularly want to divert a discussion about this ending into one about the etiquette of draw offers and their refusals!)

The Shredder website has 6 man tablebases, which can be used to test whether positions can be won and how they should be drawn. I set up a random example, White King b4, Black King b6, White Rook h5, Black Rook g3. White to move.

A knowledge of 5 man Rook endings is needed as well, since sacrificing the h pawn is usually an option.

Actually I am reminded of a fellow I saw lose this ending in magnificent style in Lucerne once. The particularly impressive feature was that at the start of the ending he was in the approved posture with his rook on a1 (he was Black) and king on g7 awaiting White's advance. He also had three pawns of his own, on f5, f6 and h5, which one might have thought would have afforded him some extra defensive possibilities. Somehow he managed to lose all of these one by one, before resigning dispiritedly in a position which was still a tablebase draw. Awesome. I'm not sure I've ever seen a more drawn ending lost step by step as opposed to blundering (although I suppose resigning a drawn position is in a sense something of a blunder, but by that stage I certainly thought it was merely a realistic estimate of the actual prospects).

I have! Paris Open 1995. Streatham teammates Angus, John and Jeremy were there. No idea where game score is. Anyway it was a 7 1/2 hour game against a 2250ish junior which finished at 03.30, when I forced stalemate on move 106 or so. Sure neither of us had any idea what we were doing. Never felt more relieved when he confirmed my feelings (hope) that it was drawn by stalemating me. That beer afterwards tasted good! Surprised anywhere was still open! You don't get experiences like this in many other hobbies. Guess that is why chess is attractive to me and many others.
Andrew

I did remember Andrew's game at the Paris Open. The games were in the evening and we used to walk the two miles back to our hotel stopping off on the way, usually at around 1pm, at a bar.

I drew (defended) it successfully against Simon Williams once, probably almost 20 years ago in the Smith & Williamson Young Masters.

Neither of us particularly knew what we were doing, and probably still wouldn't if it happened again. I know (and knew then) that the defending king on one of either f2 or h2 is a draw and the other one loses, but I can't (and couldn't) remember which way round it is or why, so I probably just guessed and got lucky :D

Which is likely the approach I would take these days too.

Fairly sure I had one of these a couple of weeks before the McShane one - need to check as I think the game in the databases is truncated.