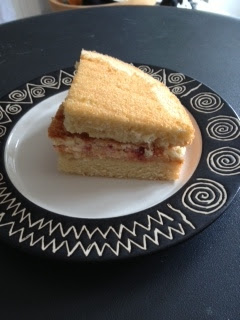 When you need cheering up there's nothing quite like laughing at the problems of others. Victoria sponge, maybe, but nothing else. On Saturday evening I needed both.

So call me a misanthrope if you will, but there I was wiping the crumbs from my lips whilst having a chortle at Magnus Carlsen's latest rook ending debacle. Our F.W.C., having gone well beyond misfortune and carelessness, is making such a habit of failing to hold drawable rook endgames he's surely earned the right to have the phenomenon named after him by now. 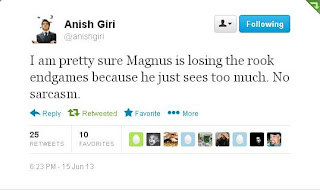 At the Candidates' Carlsen lost against Ivanchuk - Magnus versus you; EFing rook endings - and then in May he went down against Wang Hao. Given his form in this area, it probably shouldn't have been a surprise when things went tits-up once again, this time around against Caruana at the Tal Memorial. 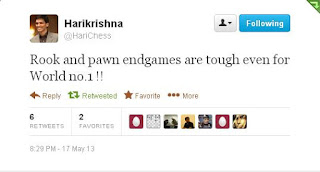 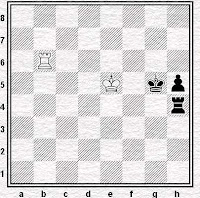 They're ten a penny, then, but if there's one thing that stands out about this particular Maggie Hoo Hoo it's why he lost. Apparently, it came down to a position with kings and a rook each and just one single pawn for Black. Carlsen thought it would be drawn. Turned out it wasn't.

Deceptively difficult, these rook and single pawn positions eh? Even when you have an elo comfortably over 2800. 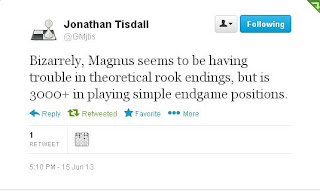 It's an odd one isn't it. Carlsen's supposed to be The Man when it comes to endings - and maybe he is - but for some reason when the game is reduced to nothing but rooks and pawns he often fails to locate the cow's arse with his proverbial banjo. Aside from losing drawable positions, against Kramnik at the Tal Memorial Blitz he added 'not exploiting winning chances' to his repertoire of rook ending mishaps. More of that next week.

Why? Who knows? It's a conundrum, to be sure.

Still, if nothing else it does at least give us something at which we can chuckle when we find ourselves in between cake. Every cloud, eh Magnus?

I suppose if he got the h pawn tablebase position wrong, that explains some of his earlier play if he was steering for that position. On the face of it, the positions where he had the rook on b7 ought to be held. Where is it thought he went wrong? Was it playing f4?

The earlier ending is important in practice. Positions where the King side is balanced but there's a solitary extra pawn on the other wing are quite frequent. In fact you sometimes choose to simplify into them.

A more pressing problem for Magnus is how he's ending up a pawn down with no compensation after 20 moves with White. He's always had a somewhat laissez faire approach to openings - no doubt to Kaspy's intense frustration - but maybe now the top guys are starting to exploit this.

I'm not sure I'd trust my judgement as to where exactly Maggie went off the rails.

I agree with your second point. Just the other day I did exactly that against the S&BCB Arts Correspondent. An ending that might or might not be getting it's own post at some point in the future.

@Anony: I read on the EC Forum that he's lost 4 games with White in his last 16. That's hardly Magnus form, I agree.

Having now run a superficial check with a chess engine, it appears that White remains OK with 49 Rb8. The defensive position is that the Black pawn can trundle all the way down to b2 with the rook at b1. The White king takes up the usual safe square of g2 and it doesn't appear that the Black King can usefully join the game. Still I expect magazines will have any number of deeper analyses in the months ahead.

That's one plan. The other is to swap off all the kingside pawns leaving yourself a passed pawn. Give up your rook for the b-pawn and then make Black give his rook back for your pawn because his king's too far away.

Not sure I'd bank too much on the mags analysing this ending too deeply. Main stream chess press don't seem to dedicate too much space to rooks and pawns.