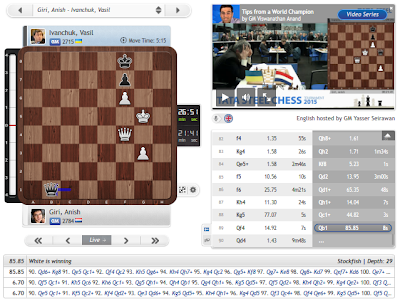 Or not, as the case may be. 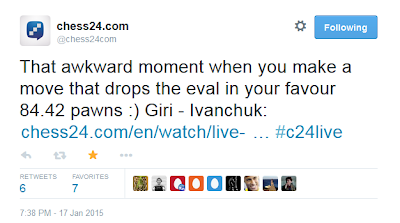 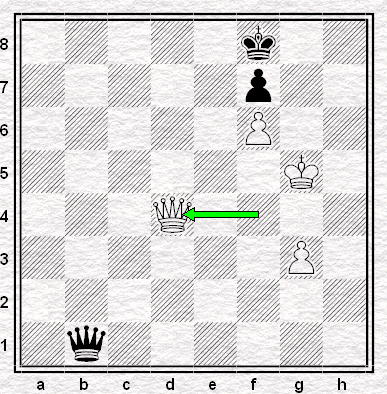 I didn't catch the moment, something for which I seem to have a knack, not to mention that I was also watching Racing Santander play Albacete on the telly. (If you think Van Wely shot himself in the foot, you want to try this.) Anyway even without the help of chess24's tweet, it's hard to miss a change in the evaluation from +85 to +1.

So what's all that about? On Chessbase, Alejandro Ramírez explains:

And here's another analyst: 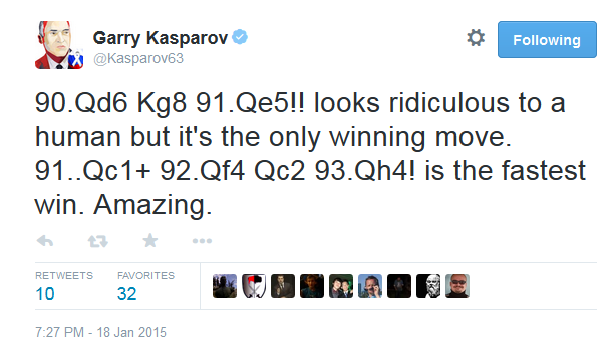 Well I trust that's clear. After 90. Qd4? (rather than 90. Qd6! or several other moves not quite so favourably evaluated) I have no idea whether or not the win has gone (this chap thinks it hasn't) but nevertheless, letting 84 points worth of advantage slip doesn't happen every day. Quite the moment of drama.

Quite the moment, and I missed it. Serves me right for not paying attention.

Mind you, everybody else seems to have missed it too. Precisely because it's so difficult, as queen endings are. Checking out the commentary* that I might have been listening to had I not had the football on, there's no sense of the drama that, the computer tells us, was actually taking place on the board (albeit at some point somebody seems to have tipped Yasser Seirawan the wink). Other than that, while Giri is thinking, Yasser just moves the pieces round the board trying to find a clear win for White, without success.

Of course he does, because queen endings are difficult. And yet the win was there. The game was all over. And then it wasn't. And that's a drama you don't want to miss.

That's what computers are for. That's the illumination which they provide. Because drama exists in the present, not after the fact. 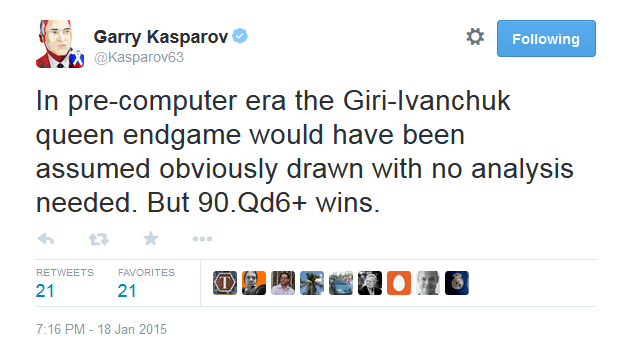 Now just because you can see the computer assessment doesn't mean you have to. Part of the mystery, the fascination of chess, is that though everything is visible, nearly everything is hidden: not knowing what is going on is what we are used to. But it's also possible to swap the mystery for drama. The otherwise-hidden drama. The computer reveals. It illuminates. If we want it to.

It doesn't make a fool of Anish Giri or Yasser Seirawan, except in so far as the computer makes fools of us all. Nobody is going to say that Anish Giri, because he let slip 84 points worth of an advantage, cannot play - save somebody who was a fool already, and will remain a fool with a computer or without one. The only conclusion most of us will come to is a player of Giri's class can shed so many points, then chess is an even harder game than we thought it was. 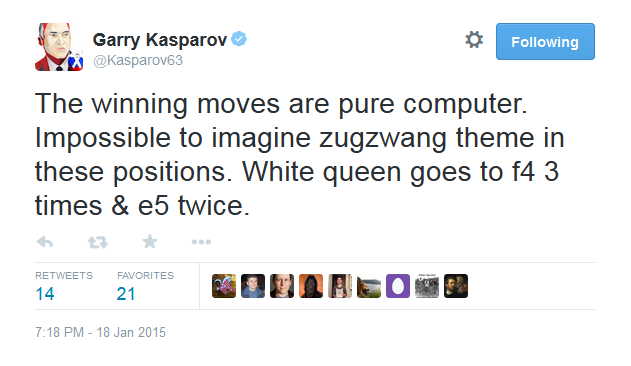 That's not pernicious, rather the opposite - and what it facilitates, in us, is neither ugly or stupid. It enlightens us. It's a miracle. It can bring an apparently dead game alive.

More on this ending on Monday.

A very similar experience was watching the Saric-Van Wely game yesterday. At move 90 Black was winning, at move 91 it was a draw. The computer illuminates. (And that's a drop of "infinite" size.) Also, it was a rook and pawn ending!

I had a related thought about improving chess coverage - instead of moving randomly around games, or relying on tweets, computer alerts commentator when the evaluation changes by eg 2 pawns or more. Then commentator analyses and works out,without computer help, what went wrong (if they can).