Will There Be A White One?

Wandering around an exhibition trying to spot a bit of Chess-in-Art can be hard work. Any chess may be well-hidden. It might take some effort to find. Often there's no direct hit anyway, just a passing similarity to some familiar Chess-in-Art piece, an echo perhaps, although just enough to get you thinking.

Take the absorbing exhibition on in London until 5 April at the Whitechapel Gallery: 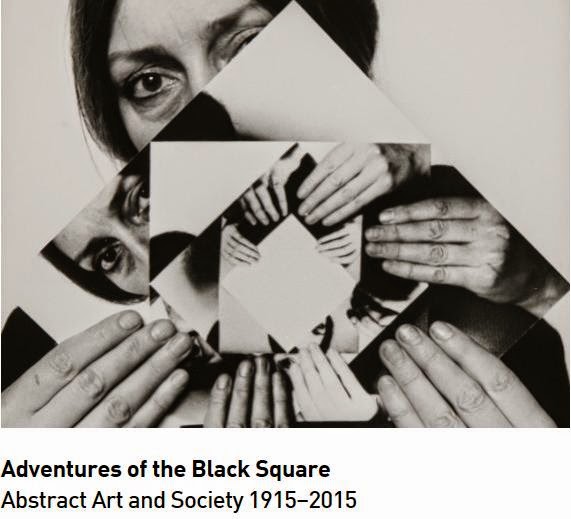 I had high hopes. After all, Malevich's Black Square of 1915 and the Russian Revolution - it is the starting point for the exhibition, and confronts you as you enter - must be the bare-essential of abstract Chess-in-Art. Will there be A White One, I thought, hanging alongside; or 64 Squares In Alternate Colours.

The show is as much an exposition as an exhibition. It tells an unfolding story of the "ism" unleashed by Malevich, and maps the development of the geometrical abstraction that flowed from the Black Square, through the 20th Century in the downstairs gallery, and on, upstairs, into the 21st.

Over in the corner is an archival slide-show to put into explicit context all this geometric-abstract art, and demonstrate the major theme of the exhibition: that this optimistic, rational, pure (though not so simple) art had something to say to the outside world, i.e. make your buildings, your living spaces, your theatre, your politics according to these principles, and you too will be optimistic, clear thinking, pure...and so carry forward social progress (though, regrettably, Mussolini took an unhealthy interest). They didn't call it "Suprematism" for nothing.

Unfortunately Stalin didn't get it (in spite of the name) and so Rodchenko's (another paid-up member of the the Russian avant-garde) workers' canteen never got off the drawing board, except in modern museum reconstructions. There was one at the Tate a few years back, and there's a glimpse of its chess table in the slide show (yes; a chess table in a workers' canteen), though it helps if you know what you are looking for. Here's one they made earlier in Japan in 2003. 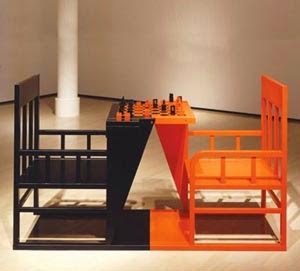 So, stubbed out in the East, this formalist (Stalin's dismissive term) deviation from the official Party line went West and got a foothold in modernist art and design. There are some stunningly beautiful (if one is allowed to say that) works in the exhibition, and here are some that caught my eye - overwhelmed it in fact, in spite of their Spartan economy. The one in the middle put me in mind of some of Tom Hackney's work (to which we should return in a not too distant blog), especially as its so carefully crafted (this is an embroidery); and on either side there are studies in dynamic geometry, something we chessers know a thing or two about. Paul Klee's chess paintings are hinted at, but he is not abstract enough for this company, even though the Bauhaus features in the slide-show.

Upstairs, the progressive project runs onto the rocks of dysfunctional late capitalism. Crystalline clarity is rubbished by urban decay, consumerism, and the aesthetic of landfill. The black square lies dog-eared and disfigured, and the movement seems to unravel, as does the last work by the door, literally, before your eyes.

It's an altogether instructive exhibition, though - as the upbeat downstairs goes downbeat upstairs - it is, by the end, a chronicle of diffusion and ultimate dissipation. Sadly, there isn't a white one, and as far as explicit Chess-in-Art goes, meagre pickings. But if you want something upfront and and in your face, then there is a great opportunity coming up from the other end of the spectrum (i.e. representational and socially conservative). Opening on 25 February at Tate Britain will be an exhibition of late Victorian sculpture that will include this:
We caught it briefly a few years ago when it was on general view for a time, also at Tate Britain. It was in the era when the staff would frog-march anyone attempting a photograph and you had to resort to traditional pencil and paper to get a souvenir. Now the Tate has officially relaxed its prohibition (in the permanent galleries, anyway), overwhelmed by the legions of tourists and locals snapping away oblivious. These days there are pictures of the work on the web, so you can get a virtual peep at it wherever you are - but nothing beats seeing it for real in all its animated life-size three-dimensional glory. If you can, don't miss it.