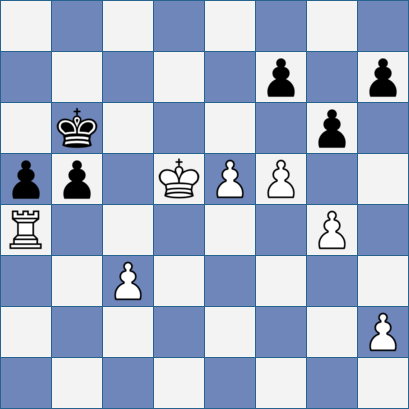 As I was saying last week, the problem with starting a regular column on king and pawn endings is the absence of fresh examples in top level chess. Elite chessers simply don’t play them these days.

Take the first round of Wijk, for example. Only three of the seven games were pawn endgames, with just one of those being played by the World Champion and ... hmmm. Hang on. Maybe this year is going to be easier than I’d thought. 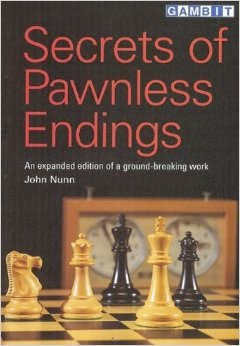 May not be required in 2015 after all

So, Ivanchuk - Jobava. I’m counting it even though there’s a rook still on the board as obviously Black has to recapture. Except that Jobava didn’t bother. He jacked it in rather than complete the trade that he’d initiated on a4 when he realised the king and pawn ending was lost.

I think it’s fair to say that it is not especially obvious that it’s time for Jobava to call it a day. I wasn’t able to watch the game live, but I realised that something interesting must have happened when I saw the Telegraph’s chess correspondent tweet suggesting that Black might have resigned in a drawn position. Later I discovered that Jonathan Tisdall was "astonished" that Jobava had given up in the final position. As was Seirawan, apparently, judging by his amusingly confused question to Chucky in the post-game interview.

It seems that computers were bamboozled by the ending too. I gather Chess24’s online engine was evaluating the position as 0.0 at the point of resignation. My own machine - HIARCS running on a MacBook Air - even thinks that Black is better! You have to let it run for over two minutes before the bitcoin drops and it realises that White is winning.

SMA #30a: "It’s not so difficult for the good Grandmaster"
(Ivanchuk)

If you haven’t seen Chucky's reply to Yasser, you’re in for a treat. Before you go there, though, why not try and work it out for yourself. If you ignore the Bloody Iron Monsters, once you grasp the key idea the solution is definitely findable.

PS:
Talking of Ivanchuk: don’t miss this superb photograph of him by Fred Lucas from 2008.

PREVIOUSLY:
Back to the Future
The Final Move of 2014

Houdini 3 (not even 4) has White winning easily enough.

Surprised that Seirawan did not consider this a win. Two disconnected passed pawns just win if the king cannot capture one of them, the rest is calculation details. And the details are not hard. Computers are not "thinking" properly on this. For a human, it would be "+-" at low ply and then if you calculate deeper it might change to "=".

King and pawn endings are my favorite.

I don't get this either; once you realise that Ivanchuk is actually White and not Black (a hurdle it took me three or four minutes to surmount) then it's immediately obvious he's winning, I would have thought.

Funny that you said "try and work it out for yourself" and then people immediately reach for their computer! If fahrenheit 451 works on books what temperature for silicon? Look forward to more pawn endings.
JS

You have to give credit to Jobava for realising that it was lost, although he could have made it more spectator friendly by playing it out until it was more obvious.

Apparently silicon melts at 2577 degrees fahrenheit and this also happens to be the year the world is due to end! Thank goodness for global warming.
JS

You have to give credit to Jobava for realising that it was lost ....

I’d give him more credit if he’d realised the move before.

Funny that you said "try and work it out for yourself" and then people immediately reach for their computer!

Well maybe they looked first then went to an engine? it’s an interesting point, though, why (some) computers made a hash of this position. Pawn endings are mostly calculation, aren’t they? is that what the machines are supposed to be good at?

To be fair to Seirawan, btw, it can’t be easy to talk and think at the same time. It’s not like he can just go silent and think for a minute or two. And the engine was say dead draw, apparently.

Talking of engines, if old Houdini can do it, I wonder why the others can’t.

Looks like I need this series; took me a while to figure it out.