Chess in Art Postscript: A Game At Chesse - Seconde Parte

Last time we had a look, in rhyming couplets, at Jacobean playwright Thomas Middleton's "A Game At Chesse", in which the chess-piece characters play out an allegory of C17th Spanish-English relations, and his "Women Beware Women - a Tragedy", which is currently revived at London's National Theatre.


Your blogger has now seen WBW in the flesh and, as promised, brings you a report on the action, together with some goings-on in the wings. "Oh, wise-acres!"

In this brilliant play, Chesse grabs the limelight even before the interval (you can get a glimpse by clicking on "audience feedback" here - it's about three quarters of the way in) and it plays intimately with the dramatic climax of the scene: a rape (I'm sorry to say). "Oh, my extremity!"

And here I'll come clean: revealed to an unsuspecting public in small print towards the back of the Programme, in the Production Credits, it says, plain for all to see: "Thanks to.......Martin Smith and Richard Tillett and the Streatham and Brixton Chess Club". "Forsooth!" And more to the point: "How so?"

Back in February the NT contacted Richard (our Club Secretary) to ask if we could help by coming up with the chess moves for the actors to make a credible game, at the same time fitting the dialogue. The task fell to your art critic manqué, and fantasising my fifteen minutes of fame announced in lights along the South Bank I grabbed my pocket set and fiddled furiously. "Yes, I do't too truly!"

The scene has devious, scheming Livia (Harriet Walter), playing the black pieces (natch), running rings round widowed Mother on, and off, the board. Livia, conniving with the Duke of Florence, uses the game to distract Mother so that he can ensnare, and have his wicked way with, the lovely Bianca Capello. Mother had been charged by her son to keep his Bianca inviolate while he is away on business; they are newly-weds. "Oh sir, 'tis true!" 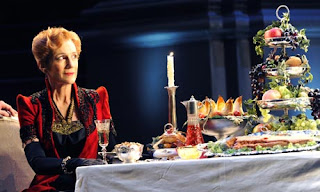 Livia will have you on toast. Photo Tristam Kenton

The dialogue has the player-characters commenting on the game albeit using some rather odd terms foreign to modern chess: "blind mate", which we took to mean mate overlooked by the victim and then retracted so that the game may continue; and rooks called "dukes", which facilitates much punning and innuendo vis-à-vis the predatory Duke of Florence. Here is one:

Livia, to Mother, as Bianca is enticed upstairs by the Duke's henchman ostensibly to look at "rooms and pictures": "Here's a duke/ Will strike a sure stroke for the game anon;/ Your pawn (i.e. Bianca) cannot come back to relieve itself." Hmmm.

And some moves later another: as the Duke of F. drags Bianca off, Livia mocks: "Did not I say my duke would fetch you over, widow?" Tacky.

And yet another, as the evil deed is done off stage: "Has not my duke bestirr'd himself?" Yuk.

The game we cooked up was definitely, and deliberately, not GM stuff. It has sundry early pawn and rook moves such as you get with social players, a blunder by Mother losing the exchange for nothing, and.....but enough of this dalliance. "Let the play begin!"

Yes, well. Like I said, not exactly GM stuff.

We built in two "blind mates" to be played on stage and then taken back (19. Rh7 Qxf2++, and 22. Ne2 Qh1++), because the dialogue seemed to demand it when Livia says "I have given thee blind mate twice." and Mother myopically concurs: "You may see, madam,/ My eyes begin to fail."

Trouble was, they didn't use our game! "Bitter scoff!"

I suspect that the NT people found that our concoction was too literal, and didn't fit the pace and choreography of the final production. The Programme also thanks Nigel Blades of Greater London Chess Club for his assistance, and maybe it is his handiwork that is played out - a fittingly bloodthirsty 1. e4 e5 tactical skirmish; and while difficult to be sure from row G of the stalls, it looked like a Traxler, or maybe a tasty Fegatello.

The attack of the fried liver.

After the opening, and middle game during which Livia waves a captured white pawn aloft at the "your pawn cannot come back" moment, the game disappeared as the stage rotated, then returned fastforwarded to an endgame in which the "black king makes all the haste he can" with a Long March down the board to help with a first rank mate - visually very striking - followed by Mother's resignation, theatrically tipping her king."Bravo! Twas most fit!" 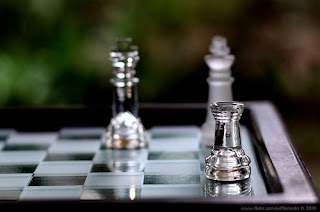 "Vengeance met vengeance/ Like a set match, as if the plagues of sin/ Had been agreed to meet here together" as Livia's brother (stained by incest) says amid the mayhem, before fatally impaling himself on a guard's halbert. And good riddance methought (and, beware halberts).

The vox pop and production shots linked above in this post, and again here, give a fair taste of how thoroughly, and improbably, enjoyable the play was. It was a vivid spectacle in its stylish retro-modern set and costume, emphatic lighting, and exploitation of all directions of the stage: left, right, behind and, for the doing of nefarious deeds, upwards. And how unexpectedly did the arcane language, after lying dormant on the page for 400 years, dead to my ears, spring to life and leap to comprehension, through the nods and winks, rhymes and rhythms, of the performance.

But there is a final, and significant, twist to the story. Let's go back to that "blind mate" business. We thought, as did Middleton, that it was a "technical term of chess, when a player (here the Mother, and by extension Bianca) does not realise that the king is checkmated and the game therefore over", as says J.R.Mulryne, Emeritus Professor of English at the University of Warwick, in his footnotes to the play in the Revels Student Edition (2007).

But, following a discovery I made a few days after seeing the show, take another look with the help of Arthur Saul Esq., who wrote The Famous Game of Chesse-Play in 1614. He was writing when the term had currency.

"A Darke Mate, or a blind-Mate is all one, for if a Mate be given, and hee which giveth it seeth it not, you may say it was darke, he wanted light, or hee was blind, otherwise hee would have seen it." (bold added)

In view of this, the correct rendering of the "blind-Mate" in the game would be for Livia to deliver it, but not to clock that she had done so: to "giveth it [but] seeth it not". Middleton has it back to front and makes Mother receiveth it but seeth it not. 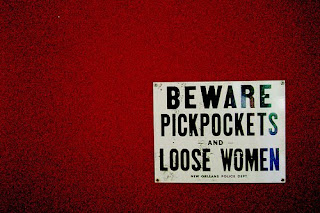 Why does this matter? Because if he got it the right way round, then "the proper technical meaning of a "blind mate" [would] contradict..the sense of the scene as a whole..." as Paul Yachnin (1982) puts it (and it is he who gives the Saul quotation). Correctly done it would have been Livia's eyes not-seeing, blind, and not Mother's; but that would have made nonsense of the scene, because Bianca might then have been rescued from the Duke's lascivious attentions.

For all Middleton's messing with chess he didn't quite understand all its subtleties. A case of the blind leading the blind. And he's not the only one. Let's just be thankful that "blind mate" has, like most of the characters at the dénouement of Women Beware Women, died a death and is now extinct on the chess board.

Thanks to Tom C. for helping me get my hands on Paul Yachnin's paper "A Game at Chess and Chess Allegory", Studies in English Literature 1500-1900 (Spring 1982), where he quotes Arthur Saul The famous Game of Chesse-Play (1614; facsimile rpt. Amsterdam: Thatrum Orbis Terrarum, 1974).

Thanks to Ellen McDougall at the NT for kicking this off, and for the complimentary seats; and to Richard Tillett for the collaboration.

Greater London Chess Club were also approached for help by the NT, and I put together the game used in the end for the chess scene. I tried to produce something that matched the dialogue, was visually interesting with lots of captures and long moves and credible as a game that might have been played in the 17th century. The trickiest bit was to get the black rook (Duke) running amock on the board just as he does on the stage.

You can play through the moves at www.glcc.org.uk/games/nt.htm

I saw the play a couple of weeks ago and thought it was brilliantly staged throughout - would highly recommend it - but see it soon as the run ends 4th July.

My guess is that the game with the least moves won.