A Collection of Dutch Bits and Bobs

We have a debate about dodginess, a pair of exchange sacs and a nightmare video for you today – all with a Dutch theme.

it's plain simple: the classical dutch suxx, you should never dare to play it.

From the ChessPub Forum

I don't know whether Dennis Monokroussos (Monday) would consider the Classical Dutch to be "junk" or Nigel Davies (last Wednesday) would think it "tricky" but clearly our ChessPubber feels that the opening belongs in the bin. I understand the sentiment – it’s hardly a surprise that neither Anand nor Topalov thought that 1. … f5 in response to 1. d4 was worth a punt in Sofia last month – but he hasn’t shaken my view that it remains an eminently playable opening for most chessers.

As it happens, the day before I read the Chess Pub thread I’d seen a video on Simon Williams’ site in which the Ginger GM showed how he used his favourite opening to chop up IM Alexi Slavin (a 2300+ rated opponent). Obviously Williams won the game because he is a good player and not because he shoved his king's bishop's pawn forward two squares but if the opening doesn't deserve the credit for a GM's win why should it get the blame if we use it and lose?

I'm certainly not going to be giving the Classical Dutch any time soon but I suppose we each have our own iffiness threshold. If yours is set at a sufficiently generous level to include the Classical Dutch you may be interested to know that Williams won his game using a variation discussed on the Killer Dutch, a DVD which has just received a highly favourable review from Carsten Hansen over at the Chess Cafe.

Moving on, I’ve been pondering exchange sacrifices since my post on Jacob Aagaard’s crushing win against Bo Lindberg and I found a couple of examples when I took another look at Williams’ DVD. 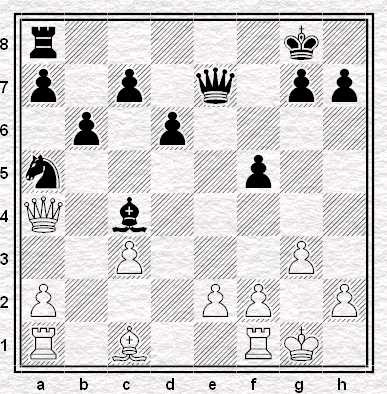 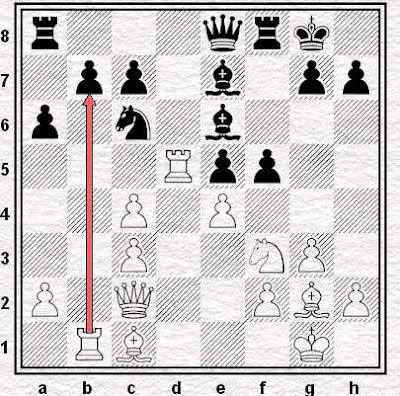 I might have been inspired by Aagaard to look out for the exchange sac theme but these positions are a rather different kettle of fish to the one that he played. Here material is given up not for a direct attack on the king but for compensation that's much more abstract in nature.

In neither case do I find it difficult to see that the sacrifice leads to something in return, the difficulty I have is judging whether there’s enough. When I told T.C. that I was struggling to understand this kind of position he came up with the idea that it might help to consider things the other way around.

Tom's suggestion was rather than asking whether I would get enough positional compensation for the material when I was contemplating an exchange sacrifice I could reflect on whether my opponent would get enough material to compensate for my better position. It’s an interesting reversal which rather seems to shift the burden of proof in some way and something that's definitely worth trying out I feel.

Finaly we have another contribution from Simon Williams. I guess we've all got our chessboard nightmares. Regular visitors to our humble blog may not be completely unfamiliar with Simon’s.

Reminds me of the time when Scott Freeman of CCF threatened to 'go pubic' on something. That was most concerning.

Ammended to spare your blushes Angus :-)

AMMended? Or perhaps that was delibberate?

Just proofing our school reports: the sports teacher moved several pupils from the lager groups and opined that another pupil had good gore skills. The art teacher wrote that one pupil enjoyed every minuet in the class.

On another subject, I was rather concerned by Simon's otherwise excellent and highly entertaining video. Being depressed because you lost horribly to Danny Gormally isn't the same as suffering from Bipolar Disorder, and I could imaging that some Bipolar viewers might take offence.

That video was hysterical. Get that man on TV now! Seriously.

hi, sorry to be off topic, but my father is trying to expand a school program he started in Barnet. Is there anyone you could suggest he talk to?
thanks!
Elizabeth Vicary
evicary@yahoo.com