ejh's Chess in Art series finished about a year ago. It treated us to a generous selection of chess art, but inevitably somethings weren't included – Still Life for example.

And thank goodness for that would be a typical reaction. Still Life? Call a spade a spade as our Gallic friends do: nature mortes. Dead. Off the twig. Gone to join the choir invisible. The Académie Française consigned it to the fourth division of subject matter. Quite right, too. Dead nature and dead boring. 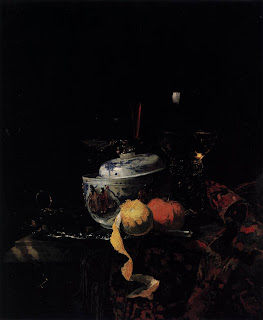 Here's a case in point in which the picture expires before our very eyes. A few highlights peer from the gloom: a carelessly tilted crock; a raunched tapestry; and a half-peeled fruit shuffling off its mortal coil, destined for recycling.

Here's another one, but with some chess this time. 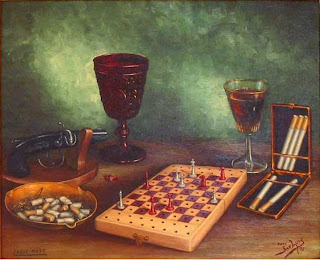 More modern perhaps (the filter tips are a giveaway), and more to look at, but that doesn't make it more successful. The objects plod around the canvas without a skip in their step, and the eye tags along behind without a focal point to stop and stare. And another thing: couldn't those ciggies (and the case itself come to that) set up a counterpoint diagonal in the other direction? Couldn’t the artist have risked more than a miserly two overlaps? Don’t you just crave another drink - something, anything, to bridge that gap in the centre?

But maybe that is all beside the point. The artist isn't doing a still life, but a whodunnit. Look at those his-and-her glasses, one full, the other empty; the fag-ends (tipped for her, un-tipped for him) smoked drag for drag; the discarded piece doubling as a blood spurt under the barrel of what could be a lady’s weapon. The game is up. This is chess as a duel to the death. Check mate on the board and dead mate on the floor, and that's stone dead, not restin'.

Compositionally this is a bit more exciting: 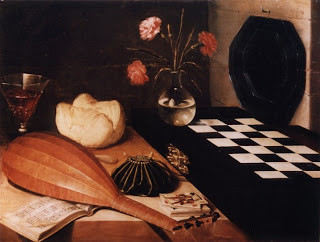 Still Life with Chess Board 1630

The elements are clustered, asymmetrical, untidy, overlapping, and positioned on either side of the demarcation line raked through the picture. The chromatic action is on the table with a collection of meaning-laden bric-à-brac, while on the cabinet the black and white chess board calibrates the colours and tones. There is a treat in the rendering of the varied surfaces: reflective, granular, patinated, polished, satin, even transparent.

The bits and pieces to the left represent the five senses (as the picture's subtitle has it, according to some sources), whereas the chess board, at a guess, stands for the higher intellect savouring and refining what is available. It presents itself as a cartographic scale that measures and assesses true values. The board and platter are joined only by carnations, emblems of carnal pleasure and its inevitable decay, and together they make a commentary from beyond the divide. The message is that mortal flesh and its capacities are short-lived: so ponder while you may what you'll leave behind when you go (and there'll be no chess on the other side).

And this maybe is another take on the five senses theme, from modern times again: 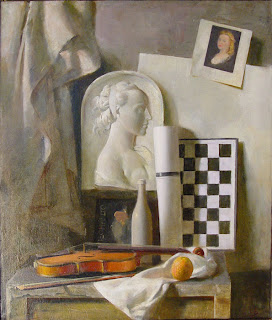 Still Life with Chess Board 2000

It is a carefully centred arrangement with warm points of colour in orbit in a luminous space. Once again a board is the chess motif of choice, and it multitasks: its rigid linearity is a foil for the softer surfaces and curves in the design, and makes a call that other right-angles echo; its darks and lights (modulated by a cast shadow) define the tonal range; and its narrative function is to evoke the absent friend represented only by stolen images – the photograph and bas-relief. This is a shrine, with mementos of someone recently departed arranged as on an alter. A significant other perhaps; but they'll play chess together no more.

An obsession with borrowed time seems to be the cheery lot of the still life artist. Here today and gone tomorrow is the message: life stilled. 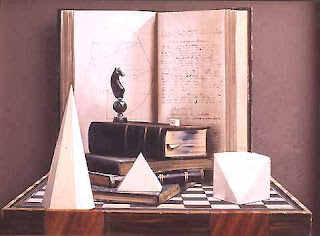 Here a black knight/dark night pun suggests familiar territory, but maybe this one is on a different tack. It is not about the nature of being (life, experience, relationships - that sort of thing), but the nature of Being (what's it all about; what underlies reality - what sort of thing are things, sort of thing). The artist is on a tack alright, brass tacks, he wants to get down and metaphysical.

First off there are the alabaster solids: the one on the left has a pentagram (5 sided) base, there's a pyramid (4-sided) in the middle, both of which have, allegedly, harmonious properties, and the bit missing from the cube on the right would be, yes, a 3-sided form. Next up, behind the knight is what looks like an effort at a construction diagram for a golden section and indeed that is where the piece sits within the rectangle of the picture frame. Then the disposition of the books (the top one exactly as deep as the three upon which it rests) isn't accidental, they have a happy congruence with the vertical halfway line of the picture, which divides the ten (no mistake) squares of the board into two lots of five, numbers that crop up in the formula for the golden mean, where 1.61803...is given by the square root of 5, plus one, all divided by 2.

Solnon is alluding, it seems, to the hidden order beneath the surface chaos, to the principles governing the contingent; and in the here and now, the inherent not the hereafter.

Perhaps there is more to nature mortes than meets the eye, and we should give it the time of day. Not dead, Major, just restin'. And to prove the point have a look at this little display of discreet good taste, the fruits of privilege, set like pearls on velvet.

Chess In Art index
Posted by Martin Smith at 11:00 am

I've never really had a clue what still life painting was about before: Perhaps, now, I do. Many thanks.

Chess is a world within a world. But which world is within which?