Excited about the London Chess Classic? About Carlsen going for the +6 he needs to break even rating-wise, or whatever it is? Kasparov on the phone after each round? About a resurgent Short testing himself at the highest level again? About what David Howell might pull out of the hat? About Kramnik's repertoire - doesn't he even venture the odd 1.e4 against sub-2700s? And isn't Michael Adams one of those non-Super GMs now? Not to mention the side tournaments that range from blitzes to FIDE Opens? And, oh yeah, the Kortchnoi simul?
Well, if you're not excited now, you probably never will be, since the whole shebang starts tomorrow. Or maybe this will get you in the mood last-minute: 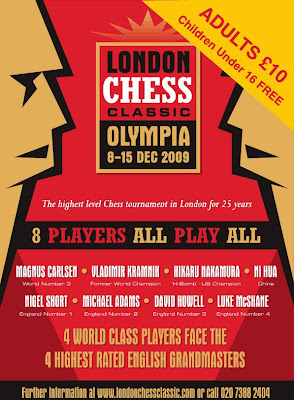 What a punchy poster! And is it me, or does it more than vaguely resemble boxing adverts? 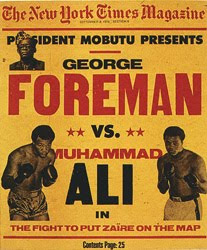 Why not? The Fight To Put Zaïre On The Map; The Fight To Bring Top Class Chess to Britain. That's the kind of thing we need. And hopefully the organizers will have learnt a few other tricks from boxing too. How about bikini-clad beauties displaying the number of each round as it begins, eliciting improbable grins from the blood-splattered faces in the front row?
But what I'm really hoping for is a manic announcer hyping up the crowd as each contestant enters the ring stage, replete with wacky personal characterisations of the combatants. Google boxing nicknames, and you'll find they range from the banal - "Iron" Mike Tyson, "Big" George Foreman - to the brilliant: Andrew "Six Heads" Lewis, Juan "The Hispanic Causing Panic" Lazcano, "The Count of Monte Fisto".
Which leads me, rather late in the post, to a question. What nicknames would you like to hear introduce the players tomorrow, as they strut onto the London stage for the first time? How about: Vladimir Kasparov Vanquisher Kramnik? Magnus Mega Champ Carlsen? Nigel Nine Sacs Short?
You can do better. Do so in the comments. Fight!
Posted by Tom Chivers at 10:01 am

I love the captions attached to the players:

Does it literally say Kramnik is a former toilet? Funny - and if you're bulgarian accurate. It works on so many levels :-)

Hua of course should be

I like Hikari 'You know he's not Chinese' Nakamura.

Hikaru Nakamura, not "Hikari". (As in Genji Monogatari. Or, you know, Star Trek.)

Magnus "The Kid" Carlsen
Hikaru "The Hero" Nakamura
"Tricky" Micky Adams
David "How does he do it?" Howell
Luke'm "Duke 'em" McShane or Luke "feel my pain" McShane
(Nothing's better than Vlad "the Impaler)
Ni "who ya'" Hua or "Kneecaps" Hua
Nigel "The one-time contender to the throne but came up" Short or Nigel "The Retort" Short

A new (to me) cool boxing nickname: Bob 'The Freckled Freak' Fitzsimmons.