Chess in Art Postscript: Chess-in-Artists do for Christmas.

The Chess in Art series, and subsequent Postscripts, have shown Chess-in-Artists roaming hither and yon in search of fresh insights. So it is a warming seasonal sensation, like the first Harvey Wallbanger on Christmas day (best taken before breakfast) to discover that many of them applied their palettes to the Yuletide. Not something that readily springs to mind as a Chess in Art sub-genre, for sure, but it will do nicely as a tasty stocking filler for mere players like ourselves.

As is the artists' privilege, they approach the matter sidelong in order to catch unawares the darker side of this shrilly trumpeted season of comfort and joy, comfort and joy, this season of comfort 'n joy. This should be no surprise, as with privilege comes duty. Thus it is the responsibility of the artist to reveal, lay bare, and provide for moral improvement, especially in rootless and troubled times.

Rootless and troubled times that have been with us since 1462, or thereabouts, when there was the first recorded incident of board rage: 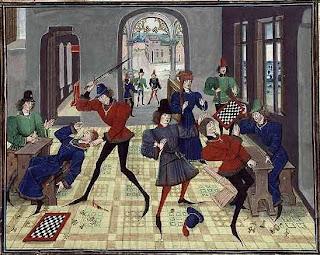 None of us enjoys losing, but this is going a bit far. Thankfully FIDE seems to have succeeded in stamping it out, along with those new-fangled mobile phones.

By contrast, a few hundred years later, an Italian artist portrays the darker side of homely decorum and bliss. 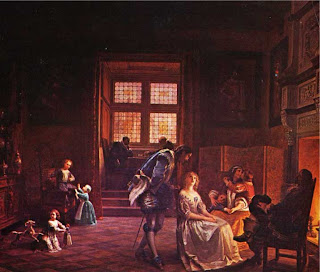 In his subtle composition Signor Beda shows that things are not as they appear on the serene surface, and that there are the tensions lurking behind the mask of domestic bonhommie, from which chess provides merciful relief.

The warm glow from the hearth raises the temperature in the melodrama coming to a boil after several days a-stewing in the emotional pressure cooker of typical family Christmas (though refreshingly free, as it is, from the trappings of rampant commercialism of our modern times). There's trouble a-brewing as the two fellows compete for the attentions of the fair lady. Let's hope that she manages to avert fisticuffs (poor lass, but 'tis the season for parrying winter duel).

Beyond, somewhat inappropriate fire-side canoodling leaves the coast clear for a posse of little darlings to squabble over their presents, and feed dolly to the dog. Wise old Father Christmas has legged it, and the chess players can hardly be blamed for making themselves scarce by the window. When the lid comes off they'll be hoping the mess doesn't dump on their board.

So, it you are spending time en famille this Christmas good advice would be to get out your set, find a nice quiet corner, and while they are roasting the turkey hope they don't cook your goose.

The game could also be a Godsend at another more contemporary, yet hallowed, Christmas institution: the office party, as witness this: 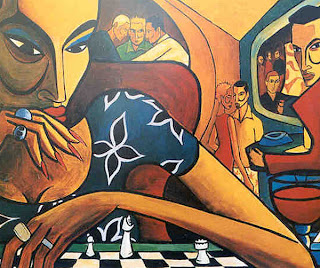 Analysing your adjourned positions on the office computer, in work-time, is asking for trouble, as we'd probably all agree. But at the annual Xmas bash, where one's colleagues do unlikely things that they regret for the rest of the year, a chess set could be a life-line. It might for example, provide a convenient pretext for a lady to rebuff the office Lothario, especially if he suggests slipping back to the deserted office to try his lap top (which, as double entendres go, is a trifle beside the compound innuendo dispensed by the late lamented Humphrey Lyttelton, a propos the lovely Samantha).

Here is another cautionary tale, warning of an elephant trap that snares many an unwary office party reveller: too much cheap plonk on an empty stomach. 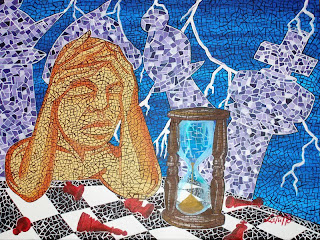 It is the morning after the ill-advised excess of the night before, and day one of his year of remorse. There'll be no breakfast cocktail today. His head pounds, his colour drains, and our chess playing friend can't bear to open his eyes to set up the pieces. As the nausea rises before him, so does a nightmare recollection of his embarrassing deposit at the feet of his work mates. He is cracking up, and he is not laughing.

But enough of all this world-weary tongue-in-cheekery. Enjoy this whole-hearted feel-good design:

In this exuberant confection of gorgeous curves the ample roly-poly minstrels, at one with their instruments, weave through and over the supporting grid. Their limbs dance across the frieze and make music as they go. We can almost hear their earthy carolling as it charms the birds from the trees; and the pieces dance along a jig. The image is laid out as a mosaic, and the rich blue, red and gold tessarae glow like baubles on a Christmas tree.

Chess-in-Artists may not have created their Chess-in-Art works deliberately with the festive season in mind, but this last one will serve very nicely as a Christmas card to all Chess in Art lovers.