Sixteen years, and what do you get?

I last won a chess tournament in 1993. I won two that year, one a grading-limited thirty minute tournament in Cowley and the other, a little earlier in the year, the national HASSRA championship in Bedford.

I never even won my class championship at school - Scholar's Mate did for me, would you believe - and it's not so easy to win your club championship when Harriet Hunt is a member. In fact, I believe the first of my 1993 triumphs constitutes the only normal-time-limit tournament I've ever won, and thus, to date - and quite likely, till the end of time - the last. I've won the occasional email tournament, but real, proper chess, cara a cara but with time to think - nothing. Not since 1993.

The first round was as straightforward as can be - I won by default. I also won in the second round, a task complicated by the necessity to win inside three and a half hours in order to catch a night train across Spain to the small mining town where I was working the next morning. The target was achieved with about fifteen minutes to spare, the night train was caught...and so, the lack of sleep contributing, was a fever, which remained with me all week and into the next weekend. The third round, I played with a temperature, which shouldn't have prevented me winning for a third time. 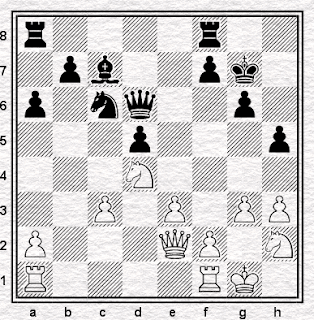 In the diagram position, Black has a simple win.

You would still more than likely win a nine-round Swiss if you got to eight points (not to mention eight and a half, a point that Black might have liked to have kept in mind during the crisis of the previous game). But winning six straight games under pressure is not so simple even with a very large rating advantage - albeit substantially simpler than without it - and although the fourth round was a straightforward win, I was incredibly lucky to get the required point in the fifth round, in which Black missed rather more wins than the one that White missed early on.

Incredibly lucky - or perhaps not so, since if you use up enough luck in one single game, you're not really entitled to any more. In round six I played a young Huesca player, Pablo Bellosta, who I'd beaten relatively easily with the White pieces in the Aragón championships in August, having a large and stable advantage out of an opening I'd known better than he. Pablo had done some work since then, and although we were, nevertheless, soon in territory newer to him than me, it was a much more two-sided game than our previous. 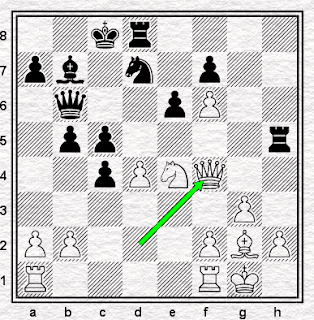 Four out of six: and you surely won't win a nine-round Swiss with seven. Well, not from 4/6, anyway. I played grinding-chess in the last three rounds, won them all and finished on seven, my last game being the last game to finish. The eighth-round leader, who had had five points from six rounds and had won the next two, nervously watched my game, calculating possible tie-break results, having lost his last game when a draw would have won him the title. The second-placed player (my third round opponent) had lost as well and as it transpired, when I reached seven points out of nine, there were four of us on the same score.

Here they have a system, one I quite like, where there are two possible tie-breaks and there is a draw at the end of the tournament to see which one should apply. The draw took place - my assumption being that my tie-break was far too bad for me to have any chance - and the computer calculated the outcome.

It took a few seconds and then it came up....

...showing that I had tied for first, on the selected tie-break. So the other system was applied, to break the continuing tie - and placed me second. Subcampeón, as they say here, but as far as I was concerned, a million miles from campeón. A million miles, or sixteen years.

I have the scores of the games I played in 1993, although none of them are really worth seeing. But I keep them anyway, for old times' sake. Preserve your memories. They're all that's left to you.
Posted by ejh at 7:55 am

Time it was, and what a time it was, it was.
A time of innocence, a time of confidences

We're all S & G fans here. Not so sure about Tennessee Ernie Ford.