Chess & The Laws of Nature

Kasparov has come to London, to explain How Life Imitates Chess. Your chance to lose money to him in real life - much as you would have lost pieces to him at the board - occurs at a book signing tomorrow, from 5.30pm in the Waterstones on Piccadilly. 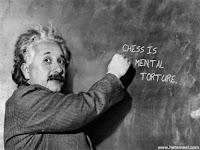 Chess & Life? Maybe, maybe not. I've always thought this chess variant was a clear, if limited, imitation of the warping of space and time predicted by Einstein's Theory of General Relativity, but that's as far as I'm willing to go.

Anyway, the season in London is coming to an end, and April is sunny and Springy and beautiful. Perhaps, then, it's a good time for a Streatham & Brixton Chess Club Game of the Season competition? For my part, I rather liked this effort of Robin's, from the match late last year against Hackney:
Did life imitate chess in that one? If so - the moral is anti-materialistic: chuck half your stuff away, and then end up winning. Perhaps I should read the book. And then, throw it out . . .
Posted by Tom Chivers at 3:31 pm

I dig the picture, Tom. And I especially dig Robin's style and game.

Anyone going to the book signing? I might go.
Andrew

Take some photos and write us a report if you do Andrew! Please . . .

I don't think I'll make it. I'm going out for drinks that night in another part of town. Also I read an excerpt somewhere or other and it read kind of dull.

The Times had a couple of pieces taken from the book last week.

It read a bit like the Fast Show's Swiss Tony had taken up our game. Instead of everything being like making love to a beautiful woman everything is like playing chess!

I didn't find it too inspiring either.