Yesterday we looked at the double bishop sacrifice that occurred in Miles-Browne, Lucerne Olympiad 1982.

It’s fairly straight forward to visualize the main variation as played in the game. Much more difficult, for me at least, is to see in advance what will happen if Black tries to throw a spanner in the works, say with … f6 at some point.

The potentially problematic points are when White plays Bxg7 and when he takes time to bring his rook forward preparing to swing it over to the kingside to join in the attack. Unlike much of the rest of the combination, neither of these moves are check so Black’s reply is not forced. 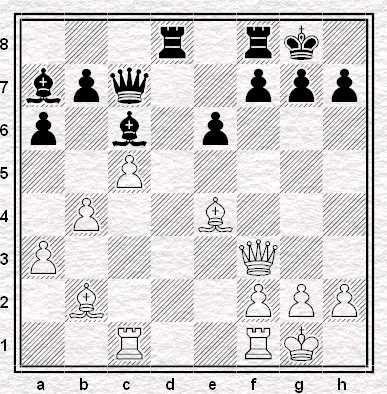 But what happens if Black declines the second bishop and tries to avoid mate with 20. … f6? Similarly, Miles could have omitted 22. Qf6+ and gone straight for 22. Rc4. Why didn’t he do so?

It’s perhaps not so difficult to work this out when you get there but you need to know for sure at this point because if you’re a couple of moves into the sequence and suddenly find Black has a sideline that works for him you’d already be committed with no way back.

Finally, playing through the game you may have noticed the moves before Miles launched the first sacrifice were 17. 0-0 Rad8. 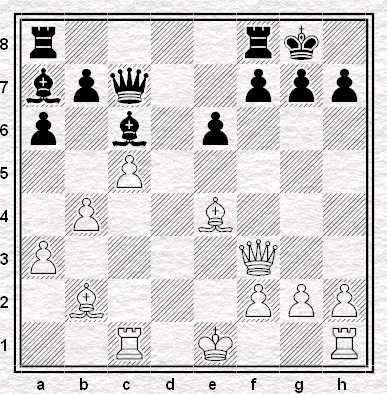 Given could have avoid the combination, with 17 … Bxe4 say, as a final exercise you might like to work out why Britain’s former leading player didn’t go all in before castling.
Posted by Jonathan B at 12:29 pm

Just the questions a decent player has to ask himself, I think.