Howard Staunton: The Tournament and the T-Shirt

Next month London sees the fifth and strongest so far Staunton Memorial Tournament:

The addition of Van Wely for Holland and the substitution of Jovanka Houska for Lawrence Day considerably strengthen the competition over the 2006 event.

Venue will be Simpsons in the Strand with the opening round on August 7, one rest day tbc and the final round and prize giving on august 18. Play begins in the afternoons starting 14-00 hours.

There is no charge for watching the games and we intend to have them displayed during play in the main upstairs bar at Simpsons.

Last year's tournament was a compelling spectacle for spectators, and I thoroughly recommend the event and its fascinating, evocative venue. I'll certainly be popping along again this year each day I can, the venue being five minutes from my office. 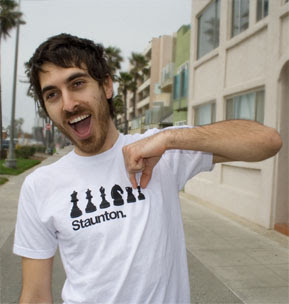 And now on to something still Staunton, but completely different. Why not stand out from the crowd at the tournament with this Staunton T-Shirt? I think it's rather dapper, and at today's exchange rates $9.99 is more or less free in Pounds sterling.

Mind you, the blurb on the website is a bit confusing:

"Once reffered to as the "OG of Chess", Howard Staunton was an English chess master and the unofficial World Chess Champion. After beating France's champion in 1843, Staunton became recognised as the best player in the world! Oh, those chess pieces you have are named after him as well. Show your Staunton support with this incredibly sexy shirt."

After extensive research on the internet, I can confirm that "OG" is short for the American phrase Original Gangsta. I'm not entirely clear on what that means in English, but I believe it's along the lines of Fine Old Fellow.

See you at the tournament, if not in the t-shirt?
Posted by Tom Chivers at 1:34 pm

I don't know why.

Given the stauton shirt is reduced and the others aren't can we assume it isn't selling. Is it, therefore, the nerdiest shirt of all?

Or perhaps it's too cool to sell to normal nerds?

On a nerdy note: The film Dirty Pretty Things was on TV last night and in it the line "Good at chess, bad at life" was spoken. Hmm...

Dave Varley used to wear an ADIDAS t-shirt and I always thought it was a bit of a give-away: "Against D4 I Do Any S**t".

I have an exciting new semi-chess t-shirt that I bought the other day at Tesco's. I'm not sure I'd wear it to a game though, it's a bit presumptuous...

"Good at chess, bad at life" t-shirts and other merchandise is available here.

I like the mug. I can see myself spilling coffee all over me out of that one.

So what does your presumptuous t-shirt say, Tom? Does it refer to the wearer as a grandmaster?

More from the 1980s Essex Schoolyard:-

All Day I Drem About Sex

"Good at chess, bad at life" t-shirts and other merchandise

That looks like a must-have to me. Is it available this side of the Atlantic?

I went to an Essex Comp. That's why I can't spell DreAm.

They appear to deliver to Europe Justin. Not too expensive. Think I'm going to get the mug.

The shipping might be cheaper if you combine orders, maybe...

Good of the Penguin to organise the tournament at the same time as the British Championsips.

I thought that too (about the Penguin). And didn't the same happen last year (I'm not sure, but I have a vague recollection)?

The blurb on the website says "The Staunton society exists to perpetuate the name of Howard Staunton , Britain's only ever claimant to be world chess champion, and to promote uk chess and in particular give young british players the prospects for gm norms and titles". So, how does that fit with running the event at the same time as the British?

I was also thinking: how come Adams and Short don't play in the British these days? Well, obviously Adams is playing in the Staunton tournament this year but... well, I wonder where loyalties lie?

Presumably if the money was right, they'd both play in the British?

I'm sure you're right Tom.

I only ever went to the British twice - 1989 and 1990. During the second trip Malcolm Pein did a Q&A whilst commentating on the games. At one point somebody asked him why Nigel Short didn't play in the British anymore (even then!). His response was that Nosher's appearance fee would be greater than the budget for the entire tournament. He was joking but the point was clear.

Why do you say he was joking? Surely it was just a statement of fact?

In Adams' case i reckon it's actually as much about rating as the money. Until perhaps the last few years he played in enough weekenders or one day rapidplays to suggest that money wasn't the only issue. For a player at that level, his rating is enormously important and playing in the British offered huge potential to lose bundles of points.

Well my anonymous friend, I say he was joking because after making the statement he said something like,

"I'm joking but you get the point."

i.e. regardless of whether the appearance fee was actually bigger than the ENTIRE budget for the tournament it was clearly too much for the organisers to seriously consider.


Not participation of leading players in a national championship is not, incidentally, a problem that's unique to chess. When British boxers are any good they rarely bother with the British championship at their weight other than as a short term stepping stone to bigger things.

PS:
I'm sure you're right about Adams and rating points.

I guess he'd also have the whole tournament preparing like crazy for him, too...

Holy Moly! The price of the t-shirt just went up to $15. I guess our link helped shift a few.