Take a closer look at the photo to the right, which you can click to enlarge, and you might notice one or two 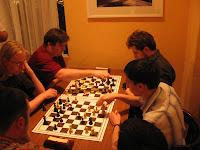 things that will surprise you. Isn't that one of the strongest chess players in the world sat on the right at the back, looking a touch worried? And aren't the positions on the boards rather wild and wacky? If not downright impossible?

Ah, but this is not chess. It's Bughouse. Last weekend saw the annual albeit unofficial European Bughouse Championships take place in Berlin. Streatham & Brixton Chess Club first teamer Andrew Stone was there, and yesterday provided us a report on how the tournament went. Today, he describes what happened when Levon Aronian turned up to join in the fun - including two videos of their head to head encounters. Here's Andrew's report:


In my report yesterday on the annual Berlin Bughouse Tournament, one thing I failed to mention was that chess world number five and Berlin resident Lev Aronian played in the tournament two years ago. Then he partnered someone of similar strength to myself, and came second. And you also might know that Lev also regularly plays bughouse online - chess permitting - being a popular and friendly member of the FICS community.

Now, this year chess commitments meant he couldn't play in the tournament proper, but he did come along on the Sunday and Monday to the hotel where most of the players stayed. He is a mix of a superstar and a normal very sociable guy, offering everyone he has met before (and those he hadn’t) warm greetings on his arrival. He played for a couple of hours on the Sunday, where he scored around 50% against arguably the best player in the world - and possibly this opponent had a slightly stronger partner, too. Lev returned on Monday, when I managed to play about 10 games against him. Some specialist bughouse players have a style that veers the game away from normal chess-like positions, but Lev has a more chess-based style. This means I can cope with his play to an extent, especially if I have the white pieces. Here is a longish video of a complete game:


The play was pretty even until the latter stages when his ever-present good natured “trash-talk” became even more intense: takes piece “thank you”, takes another “thank you”, takes yet another “you are very friendly today”! Then after six or so games I partnered the organiser Daniel - responsible for making the whole event happen - who was stronger than Lev's partner. This meant we were able to register some wins, and you can see the end of one of them in this video:


This put a halt to the trash-talk ... momentarily. But as with all good trash-talkers, a selective memory enables them to start up again as soon as the pieces have been set up for a new game! After these games, Lev played a few more - in the photo at the top of this report, he's in a spot of trouble against one of the top players, a Swede with the handle Firefly - and then the bug players moved on to a beer garden for more games. But, the airport instead beckoned for me. And that completes the story of my weekend playing bughouse in Berlin, for this year. If anyone fancies giving bughouse a try, I can help show you the ropes at FICS (as I have already done for Tom), where my handle is FantasticCat.

On the first video with about :53 seconds left or so you turn to look at the camera. What are you saying?

I was a bit concerned that a very long video was going to be very heavy, so was trying to get the operator to film shorter clips- it was- 50Meg! However on reflection it was good to have a whole game. Yes I did have fun- it is good hearing Lev's trash talking- a lot of it is tongue-in-cheek and blindly optimistic! He is happy for you to trash talk back to him if you so wish also.
Andrew

Its always sweet to see Aronian turn silent after a defeat. That alone makes it worth being on the receiving end of his trash talk for a few games ;)

I think any GM would turn silent after losing to a team with me in it!
Andrew

Is trashtalk the internet way of saying banter?