After beating the 2477-rated Kuzhuharov in the second round at Benasque - easily the strongest player I've ever beaten and one of the world's strongest players without a master title - I went down to a Georgian grandmaster, not without a fight, the following round and then, expecting a relatively easier game in round four, found myself paired with the legendary Ulf Andersson, still rated 2520. The game was somewhat one-sided: one really shouldn't mess about in the Symmetrical English against someone who knew its intricacies before I learned the moves. Mind you, the imbalance in chessplaying ability may also have been a contributory factor. 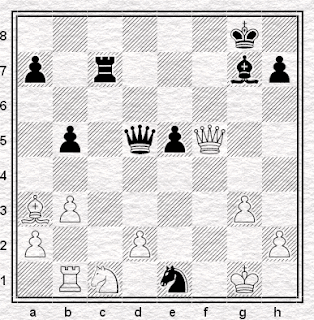 The game ended a little ignominiously: I played 26.Ne2 to threaten the knight and prevent Qd4 check, but neglected to observe that 26...Qg2 was mate.

Checkmate is rare, of course, at tournament level, even among club players. Bent Larsen once wrote that he was amused how players would play on in hopeless positions until the last move before mate, and then resign. We laugh, but we all like to avoid it and I think that's the first checkmate I've suffered in a serious game since Adam Hunt did it to me in a Kidlington congress not far short of a decade ago.

Anyway, next round I did have a slightly easier opponent, one Aranzana, rated 2001 (it's hard to translate Spanish players' grades directly into ECF but I'd estimate 2000 as roughly equivalent to 160). Easier though it might have been, and despite a good opening, I made heavy weather of the game and spent much of the middlegame hanging on for a draw, but eventually my opponent seemed to lose his way and I found mine again. 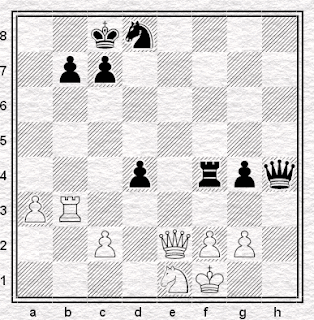 It ended faster than I thought: I was just contemplating how I should reply to a move like 32.Qd2 when he put the queen on e5 instead, interfering perhaps with plans to check on h1 but also creating the possibility of 32....Qf2 mate.

Two checkmates in consecutive games: not so much unusual as practically unheard of at this level. Indeed, if any reader has had two consecutive competitive games end in mate since their earliest junior days, I'd be interested to hear of it.

But there's more. In the next two rounds I drew, both times against players I was expected to beat comfortably, and in the eighth round, against Camarero (rated 1981) I once again played very poorly but benefitted from my opponent's attempts to win the game when he had a draw for the taking. After 25...b5? (this game and the others can be viewed below) it all went horribly wrong horribly fast. 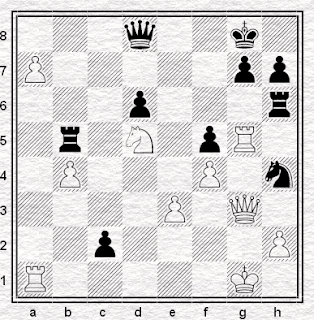 I think Black believed he was still in the game here, though reality had mostly dawned when he took twenty minutes over his thirty-first move and there are, in fact, a variety of ways for White to win. Anyway, my choice was 33.Rxg7+ Kh8 34.Rg8+ Qxg8 35.Qxg8+ Kxg8 36.a8Q+ Kf7 37.Ra7+ and now the inevitable can only be delayed by one move with 37...Rb7 but he played 37...Kg6 so I played 38.Qe8. He still didn't realise quite how completely the picture had changed: he sat there for maybe a minute working out where to hide the king before realising that there was nowhere to hide it and he was, in fact, in checkmate.

Three checkmates in three consecutive decisive games in a serious international tournament: have you ever seen the like?

The mate in one you missed against Andersson reminds me of the one Kramnik missed in his computer match recently, so you're in good company. Well done for your wins.

On which note Chris...

Those were all three interesting game Justin.

I delivered two checkmates in MIST last year, but it's much more a low key tournament (only one International Master then!) and both my opponents were in the 120s. Rounds one and four I think. The first I mated an uncastled king whilst barely out the opening. The second was an endgame, and I delivered it with a knight on the edge of the board, much to his surprise (he'd offered more than one draw offer, was perhaps irritated by my declines, and watching another game most of the time.)

My last experience of checkmate was very much on the wrong end of things against Barry Blackburn in the Surrey Individual this summer.

I can't remember the last time I actually mated an opponent myself.

The Gurevich-Serper game Tom links to is hilarious, but seems to me to be a slightly different sort of oversight - not realising that a piece can actually be captured. Of course the cause is the same, to wit failing to observe that the square was controlled by an oddly-placed knight.