Chess isn't the only game that Streatham & Brixton First Teamer Andrew Stone plays. He's also one serious competitor when it comes to the four-player, two team, two chess-set game known as Bughouse. Last weekend he was in Berlin for the annual Bughouse tournament there, and has kindly sent in a report of his adventures in two parts. Today he briefly introduces you to the nature of the game and the scene, and then describes how his team got on in Berlin, and the overall outcome of the event - at the end of today's report you'll also find a remarkable video of the final in action. Tomorrow, meanwhile, we'll have a taste of what happened when one of the strongest chess players in the world turned up and joined in the fun...

But first things first, here is today's report from Andrew:

Last week I travelled to Berlin to play in the (unofficial) European Bughouse Championships. But first, what is bughouse, I hear you ask?

Well, you may have played it before yourself - perhaps under the name Exchange Chess - where a team of two players battle against another team of two players across two chess sets. Wikipedia can explain all the rules for you, but in essence you play sat next to your partner, who takes the opposite colours to you on his board. Then when you take a piece on your board, you pass it across to your partner. He can then place it on his board in lieu of a "normal" move, when he chooses. It's important to understand that the ability to get even a lowly pawn, say, from your partner to “drop” on the board can often be crucial. This in turn means that the ability to wait for material - called “sitting” - is vital. But, you can only sit if you have more time than your partner’s opponent. So this means that most bughouse games are played at a lightning pace, in an attempt to be ahead on the clock. Hopefully this gives you some impression of how bughouse is played, and there is a video at the bottom of this report of a game, too. 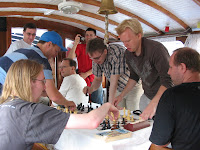 Now, most bughouse is played on the Free Internet Chess Server (FICS) and indeed players from FICS made up the majority of the 22 teams. This is the fourth consecutive time I have played at Berlin, as has been the case with many other players. As such I have made many good friends from all over Europe, and even the US, with most players staying at the same hotel and come for about 3 or 4 days. The tournament is played on the second day, with most of the rest of the time being filled with ... friendly bughouse games! And as the photo shows - even on a pleasant boat trip in Berlin some (most?) of us were more interested in playing bug.

This year I had a partner from Finland, whilst in previous years I partnered people from Russia and Germany. My partner is a strong online player, although his form has suffered a bit from pursuing a successful semi-professional poker career, where he can be found playing as many as 28 games of poker online at the same time! Last year my team came fourth, but this year the opposition was much stronger- there were 5 teams clearly stronger than us, with another 2 or 3 of a similar strength. The format was 9 rounds of 4 games (white and black against both opponents) followed by an 8 team knock-out stage. Being a veteran of these tournaments I realised the key match was the last round- it was vital to avoid a strong team. Our form was not great in early rounds- this did not matter as much apart from it meant we were avoiding the top players. Unfortunately this increased our chances of a tough pairing in the last round, and we got one. Last year’s champions. A 4-0 loss saw us freefall down the table from about 8th to 15th.

At least after that we got to play the B Final - “the losers' cup” as one “great” Dane, who takes delight in trying to wind me up, declared after my team won it 2 years ago! After an embarrassing first round 2-0 loss, we rallied to end with 19/22. This gave us joint first, but after a 1-1 drawn play-off, the others were awarded first on the tiebreak of finishing higher than us in the main tournament.

The final proper saw two Swedes take on two Lithuanians. Whilst many bughouse players are only around 2000 chess strength, all 4 finalists here were around 2350. Remarkably, the youngest was a 14 year old Swede called Nils, who achieved an IM norm 3 months ago. Mind blowing if you are English, hardly worth mentioning if you are Russian, Indian or Chinese! After a tense match the Swedes triumphed 7-5. The video will show you the lightning pace top players play the game at:

A disappointing result for us perhaps, but I will be back next year and for many years to come. Berlin is a great city and this is a great event!
Posted by Tom Chivers at 2:24 pm

Bughouse is the same as Exchange, except that you can put a piece on the board and give check in Bughouse (this was never allowed when I played Exchange at school years ago!).

Well you aren't at school now and it is allowed now!
Andrew

Another difference. We didn't use clocks when we played it. Instead we had a 'stalling' rule: if you thought your opponent was just waiting rather than thinking, you were allowed to call "stalling" and then count down from 10 to 1 - at the end of which he had to move or forfeit.

Yes I've seen some juniors do something like that. Seems a bit of an odd rule.
Andrew

It's useful in pubs when there's no clock, I find!

Just a little not for anyone who landed on this page and who wants to find the follow up post. It's here.

I remember Andrew had the misfortune to have me as a bughouse partner when we took on Tom and Andrew at Tom's flat last year.

It was fun in a - Idon'tknowwhatthehellisgoingon - kind of a way.

Judging from the video bughouse isn't much of a spectator sport.

So Andrew was playing on both sides?

Yes, I don't recall being much use at bughouse that evening!
Antony

yes it was Andrew and me against Antony and Tom.