Back inside of Zugzwang with the Ronan blues again 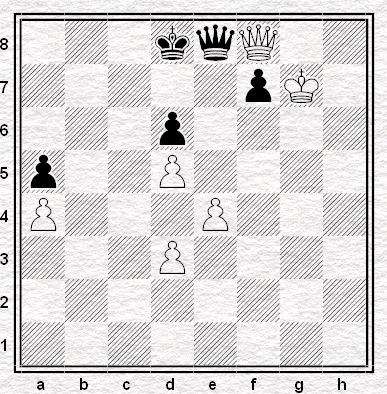 The final diagram in Ronan Bennett's Zugzwang, which claims to demonstrate a position of zugzwang, when plainly it does not - as I wrote in a piece on the subject last November, as well as discussing a number of serious errors in some of the book's other diagrams. (I subsequently wrote another piece exploring the question of whether a state of zugzwang was actually present in the other diagram for which it was claimed.)

As it happened, just yesterday, I was in Zaragoza returning some unsold books to a distributor. They have a bookshop attached to their warehouse and during a brief wander around, I happened to notice that Bennett's book has now been translated into Spanish. Naturally, I couldn't resist a look to see how the diagrams had fared in this new edition.

What I'd like to have done is compare the Spanish edition directly with the English: but as I wasn't aware of the existence of this edition until I saw it on the shelves in front of me, I couldn't do that. I might perhaps hunt around the other bookshops here in Huesca some time, but yesterday, however, not recalling exactly which were the two diagrams identified by Stephen Poole as particularly confused, and only having a couple of minutes to spare, I had to content myself with a brief flick-through, finding a few diagrams and seeing if they seemed to be in order. A most unsatisfactory procedure from the point of view of thoroughness, but, nevertheless, more than appeared to have been undertaken during the preparation of the original edition.

Anyway, those two or three diagrams that I located appeared to be prepared and captioned correctly: muy bien. Until I had a look at the last diagram in the book, the one after 52.Kg7 (or, in Spanish, 52.Rg7) which had been incorrectly described as a position of zugzwang. In the Spanish edition (on page 252, should any Spanish readers wish to look it up) it still is: the claim of zugzwang, still entirely incorrect, is still there. Moreover, a new error seems to have crept in, since the caption, observing that the f-pawn cannot be defended, refers to the peón en e7. There is not a pawn on e7. There is nothing on e7 except some empty space.

Chess is, to my mind, the struggle against error, and a ceaseless and ineffective struggle it is as well. So too, it appears, is the preparation of diagrams and their captions.
Posted by ejh at 10:20 am