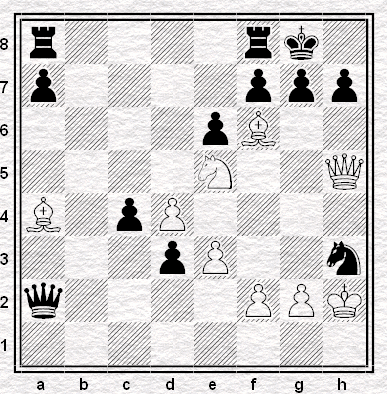 You'll recall our recent entry looking at the above position, taken from a 1904 game Nimzowitsch-Hoffer and given in Neishtadt's 1981 book Test Your Tactical Ability.

Neishtadt gives the beautiful winning line 1.Be8 Raxe8 2.Qh6!! gxh6 3.Ng4, as played in the game, which terminated at that point, with Black resigning. Mate is forced and the point of the original bishop move is revealed, forcing the a8-rook to a square which hems in the f8-rook, thereby preventing it from moving to provide the king with an escape square.

Lamentably, though, the computer sees what Neishtadt did not: it gives the refutation 2....gxf6! and now if 3.Ng4, threatening check on f6 followed by mate, 3...Qxf2! wins the game. Well done, the computer!

However, as it happens, human eyes have also seen the solution - and many decades before Neishtadt wrote. Just this month Chess Notes has been taking an interest in this very game - or game-fragment, as the complete score of the game is yet to be found. It transpires that Nimzowitsch's own notes, in a booklet published in 1929, give the refutation. (It also transpires that Black is one H. Hofer, rather than the "Hoffer" given by Neishtadt.)

More than that, though - the refutation has in fact been known since 1905! Scroll down to #5610 where Mr Hans-Georg Kleinhenz informs us that:

Additional analysis was published in the "Briefwechsel" on page 47 of the 29 January 1905 issue of Deutsches Wochenschach, showing that Black would have won after 2...gxf6 (instead of 2...gxh6) 3 Ng4 Qxf2.

Poor Crafty, more than a hundred years late with its solution. Still, as far as I can see the computer is the first to note that the f2-capture also works if Black ignores the e8-bishop and plays 1...gxf6 2.Ng4 Qxf2. Unless - or until - time proves otherwise.
Posted by ejh at 9:30 am