Pretty much everyone knows about ChessVibes nowadays, whether thanks to its lively coverage of chess news, involved and punctual tournament reporting, honest reviews, or most famously, its videos. One thing you might not know about the website, though, is that if you scroll to the bottom of its front page, each day you'll find a new and intriguing puzzle to chew on. Typically these puzzles are pretty tough, and sometimes they're not really traditional chess puzzles at all, requiring instead decisions of judgment rather than of calculation. This one from the end of April particularly caught my eye in this respect - and since I provide the solution beneath the puzzle, don't scroll down too quick if you want to try to 'solve' it yourself now: 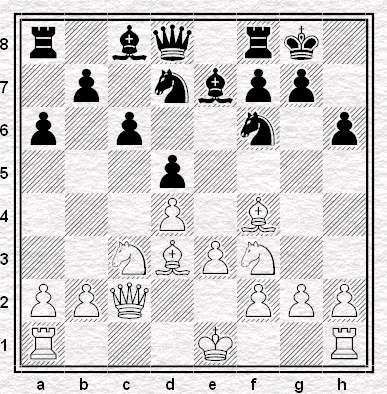 The solution is - of course - 1.g4, and the details can be found here. "Of course"? Of course. Black has weakened his kingside with ...h6, can only open the centre slowly, rather than explosively, and white has retained the option of castling queenside. Clearly, then, white is poised for a quick attack on the black king, and black is hardly in a position to strike back. 1.g4 is the thematic, ordinary move, I decided after looking at this puzzle for a couple of minutes, wondering if I'd missed something rather more brilliant.

Except the funny thing is, in the solution the next day 1.g4 was given an '!!'. Presumably the explanation is that the notes to the remainder of the game were taken from 1974 - when the game was played - and such a move was rather less normal then than it is now. (It is also unusual to be able to pull-off that kind of thing in the Queen's Gambit Declined - clearly how the game must have begun - although hardly unheard of.) Nowadays, we see this kind of thing all over the place, and in variations like the Keres Attack in the Sicilian or the g4-Gambit in the Slav, we even see it punted when black hasn't made the weakening ...h6.

All of which got me wondering, what do we want from a puzzle? An easy tactical test? A strategic decision? A tactical labyrinth to grope through? A thematic shot? Something entirely different? Well, whatever you want, you can find our new Sunday Puzzle series here, and the index of our older chess puzzles here. Whatever you prefer, enjoy solving - whether over at ChessVibes or here on our blog.
Posted by Tom Chivers at 10:01 am

Thanks Waldemar. Looks like a bit of a random shot in that position, but then I know nothing about the Albin.

Goodness you have a good looking blog!