Bad luck to the Open side, who were knocked out in the Semi-Final of the County Chess Championships 9½-6½ by Lancashire. 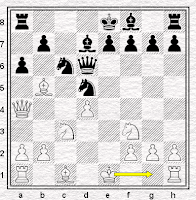 Readers with long memories may recall Lancashire beat Surrey last year too, that time in the final itself - and they may also recall that in last year's semi-final the Surrey Under 175 team knocked out Yorkshire. Well, happily they did it again this year by the convincing score of 10-6 (including one default from the Surrey side.) Two Streatham & Brixton Chess Club players took part in this one; Angus and the present writer. Angus was unlucky to only draw his game, reaching an endgame a pawn-up but with no way to convert it, whilst my opponent playing white blundered against me early on by castling in the diagram position. Good luck to the team in the Final next month.

The final bit of County news comes from the Surrey Under 100 side, who lost their semi-final 5½-6½ to Nottinghamshire. But that scoreline is even closer than it looks. The final game to finish was the bottom board - when the scores were tied at 5½ each - with a loss for the Surrey player. A disputed loss, however, because it turned out that game had been played with the incorrect colours. So the Surrey Captain appealed to the ECF for a ruling, but they confirmed that the result stood. More details can be found here . . .

Meanwhile, the ECF webpage for the County Chess Championships 2008 is here, although it doesn't seem to have been updated for quite a while.
Posted by Tom Chivers at 3:30 pm

Not quite all the county news, Tom.

Herts beat Cambridgeshire to make it to the final of the U150 section for the second year running. We are playing Yorkshire this time and hopefully will go one stage further than last season!

Adam B and myself will be representing Herts - we look forward to seeing other S&BCCers there.

Well done - and good luck in the final!