Like Dirk Gently, Douglas Adams' Holistic Detective, I believe in the inter-connectedness of all things. I was very pleased, therefore, that a couple of days after first reading Jacob Aagaard's idea that "most tournament games are not won by superior calculation ... but rather due to the superior understanding of the very basics of the game" (see my recent posts here, here and here) I came across Kramnik's contribution to Dvoretsky and Yusupov's book, Positional Play. More specifically, it was the following sentence that jumped off the page and landed on the end of my nose ...

"The game I want to show you now ended in White being routed in only 23 moves. This is not surprising - looking at it you get the impression that White simply did not know where to put his pieces, or which changes of structure were favourable to him and which were not." (my emphasis)

It's an interesting introduction because in the game in question, Shabalov-Vyzmanavin USSR 1987, White resigned in the following position, 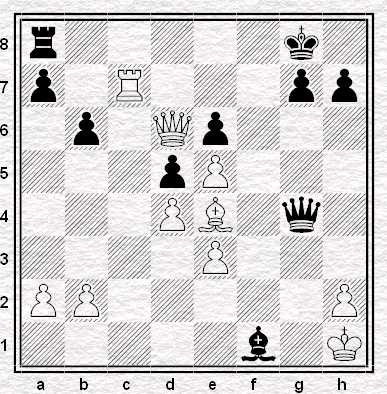 Superficially, then, this game was decided by tactics and calculation. White could not find a defence to Black's threat and so threw in the towel.

The point Kramnik is making, I suppose, is that Black would never have been allowed to reach a position where he could deliver a tactical coup de grace if White had matched his positional understanding of the game. 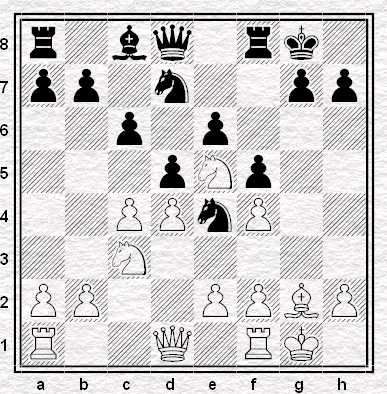 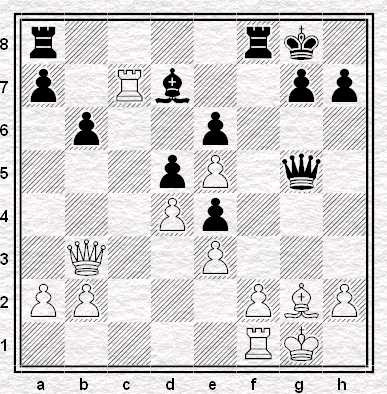 Kramnik gives three of White's seven moves a question mark, pointing out they are positional errors that hand Black first the advantage and then, eventually, victory. Your mission, should you choose to accept it, is to identify these strategic blunders. Of course, if you don't fancy it you can always amuse yourself by working out why White resigned instead of trying Bxd5.

I will content myself with observing that the opening is a Stonewall, a structure in which I never know where the pieces go for either side...

Of course, if you don't fancy it you can always amuse yourself by working out why White resigned instead of trying Bxd5.
Ah, a problem in my range: ...Bg2+ wins.

Glenn has the tactical problem solved ... so come on EJH how about taking a punt at the positional puzzler?

Gimme one in a nice Closed Lopez and I'll see what I can do....

No idea, but let's pin three tails on this particular donkey and plump for moves 11, 13 and 14.

Actually, tell you what, if I get off work early this evening I'll have a short go at this before the football starts. (I say "before" - the build-up on the channel with the coverage here started at 11am your time...)

Top of my head, though, I think 11, 13 and 15 might have been slightly askew from the fundamental frequency at which the Universe vibrates.

neither Tom nor EJH are entirely wrong or entirely right.

I shall, of course, expect some semblance of justification for your choices!

One justification, from gut feeling more than analysis (but then again, I never analyse until I think I'm losing) is that in positions of this type, it's nearly always a bad idea for White to engage in exchanges, and this is true as much of pawns as of pieces.

I've decided to stick by my choices even though I've already been told they're wrong. Here I stand, I can do no other, etcetcetc.

Move 14 looks like it's asking for trouble (surely the point of playing 12 e3 is to get a better grip on g4 and h5, for defensive purposes if nothing else?)

Come to think of it, I like the combination of Nxe4 and e3 less and less, though I don't know which is the "genuine error": and combined with moving the queen away the position after White's 17th is just screaming for Black to stick something on f3.

I nominate Qb3 preferring a push of the f pawn.

what an erudite bunch we have here on the S&BCC blog.

All the errors have now been identified. I'm off to bed now but will post a full answer tomorrow. For now, I'll confirm 14. Qb3 was definitely one of them. Queen going to the wrong side of the board according to Kramnik.

Ooops... forgot to post the answers here over the weekend. Sorry about that.

11. Nxe4?
(Vlad thinks the pawn formation following the knight exchange favours Black so White should not exchange on e4)

12. e3?
(Similarly the exchange on e5 favours Black so White should not allow it.)

14. Qb3?
("For some reason White brought the queen over tothe queenside - away from the action.")