Knowing What to Look For

Last week, unfairly or not depending on your point of view, I was making fun of Jacob Aagaard's book Excelling at Chess.

In the second chapter, dedicated to Kasparov's idea of 'real chess players', Aagaard outlines his belief that for the most part chess games are won and lost according to which player has the better understanding of fundamental positional principles.

It's an interesting idea not least because, as Aagaard himself acknowledges, tactical errors can be found in any game - even the most famous it seems. Aagaard's point, though, is that no amount of tactical ability will save you if you don't know what it is you should be analysing in the first place.

"I remember David Norwood claiming that Grandmasters calculate less than amateurs, Basically, they do not need to because they know what to calculate, or so his argument goes, at least ...

in Jonathan Rowson's interesting recent work, The Seven Deadly Chess Sins, the author talks about his six game match against Michael Adams ... After the games it always turned out that Adams had seen only a fraction of the lines addressed by Rowson but, somehow, these were the relevant lines! Adams won the match 5-1."

I read these words around the time that Justin posted a Reti composition back at the beginning of May.

It's such a beautiful study that it really deserves another look. 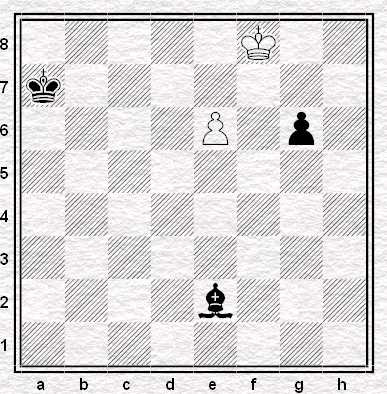 White to play and draw

Chasing the pawn down the board is obviously not going to work so White needs to gain a tempo from somewhere. Fortunately as soon as I saw Justin's post I recalled an idea that could achieve precisely that. 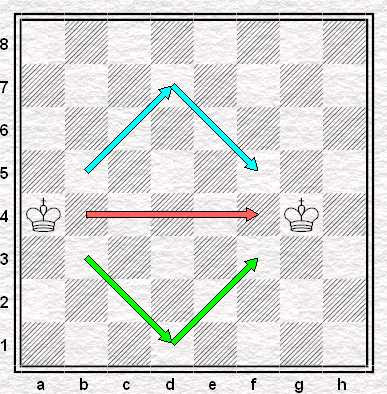 This diagram is taken from Master Chess: A course in 21 lessons (Pergamon Press, 1985). It must have made a strong impression on me because I still remember seeing it for the first time in Chelmsford library a year or two after the book was first published.

The point is that if you want to move the king from a4 to g4 the apparently direct red route is no quicker than the blue or the green. It's going to take six moves whichever way you go. Add to that a recollection of another Reti study that involves a diagonal king march and the fact that the extra tempo has to be gained from the bishop - there's nothing else on the board that White can attack - then it's not too difficult to find:-

2. Kd6 g4 - seeing that the pawn now blocks the bishop's other route to e8 convinced me I had to be on the right track and also clarified for me what White's next move has to be

and the king enters the square and it's a draw.

The whole thing took me about 30 seconds in total. That's not as fast as Fritz but unlike the iron monster I didn't need to calculate any other lines at all.

So it seems to be true. If you know what to look for the number of lines you need to calculate reduces considerably.

Of course, it's the knowing what to aim for that's the tricky bit. I so rarely do, but for one morning at least I was able to entertain the delusion that I'm not completely incompetent at this game.

I'm more prone to agree with Nigel Short on this one: "Modern chess is too much concerned with things like pawn structure. Forget it - checkmate ends the game." ~ Nigel Short

I prefer "if I don't understand what the pawn structure is telling me, I don't know what to do" - self.