And so it ends 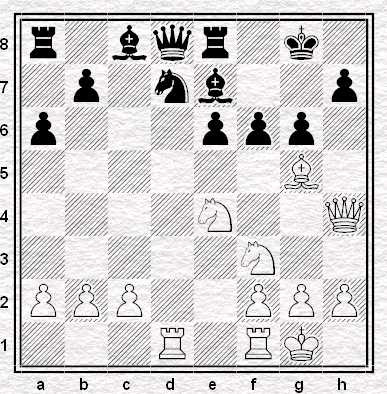 White to play and win the British Championship

So the British is now over and regardless of whether you consider him to be 'Champion' or strongest-amongst-those-who-bothered-their-arses-to-turn-up it would take a particularly curmudgeonly fellow to deny Stuart Conquest praise for winning the thing. You can only beat the guy in front of you after all and to remain unbeaten after facing seven GMs and an IM (Conquest's 11 opponents elo average was 2457) is a pretty special feat that few could match.

As EJH predicted on Friday, a play-off was eventually required to establish the winner. While this is never truly satisfactory justice was done when Conquest overcame Keith Arkell in a pair of rapid games played on Saturday morning. I've nothing against the latter but he'd only played a couple of GMs on his way to 8/11 and his opponents elo average (2403) was notably lower than Conquest's. Conquest, moreover, had been at the head of the field from round 4* while Arkell took the swiss gambit approach and was always just off the pace and only hit the front at the very end. The reason why Arkell spent the tournament just behind the leaders? That would be his loss to Conquest himself in round 4.

Conquest was a worthy winner then, and this morning you can see for yourself how he did it. The position above is from the second Conquest-Arkell play-off game. It's move 17 and although Arkell, playing black, won't resign for another 30 moves or so, it's here that Conquest gained a decisive advantage.

White to play and win the British Championship.


* the sole exception being round seven which Conquest ended a half point behind EJH's beau Bogdan Lalic.
Posted by Jonathan B at 10:10 am

he'd only played a couple of GMs on his way to 8/11 and his opponents elo average (2403) was notably lower than Conquest's.... Arkell took the swiss gambit approach and was always just off the pace and only hit the front at the very end.

Might the first half of this explain why Arkell took the approach described in the second?

''Justice was done when Conquest overcame Keith Arkell''
A friend just showed me this.
it's almost David Robertsonesque!
Come on guys,yes I only Played 2 GMs(Conquest and Jones),but I also played soon to be GMs Gordon and Trent;and I played Ledger who has 2 GM norms and had just beated Hebden and Flear.
As for my average opponent's rating,well for a start I played Hawkins(2230).Ask anyone in the North East and they will confirm what we all saw,which was that he plays at 2500 strength(he gained over 93 ELO points at the British alone!).
''Swiss gambit''.ejh if you trouble yourself to actually play through my games you will see that I fought hard to win every round.Even my 4 draws averaged over 50 moves each,and I had no lucky escapes.In round 4 I took risks against Conquest(grabbing a hot pawn,and lashing out with ...g5)and lost a good scrap.
So give me a break,especially considering that back in the early 80s I played for your club for a while-and even represented you in the British lightning team Championship.
Keith

Keith - I'm not sure what the problem is here, my comment isn't a critcism of your approach.

"give me a break"

I've no reason to quibble with anything you say here. The point of my article was not to criticise you but to suggest Conquest was a worthy winner.

I stand by that. Sorry you're a bit cross - although I suspect you're not as cross as David Robertson would be to hear that you consider we are a bit like him.

My Robertson ref was because on another forum he seemed to take particlar pleasure in my play-off loss(perhaps because I play for a rival club?).
I agree that Stuart was a worthy winner.
My only 2 quibbles are
1)The comment ''justice was done'' surely implies that there would have been an injustice had I won.
And 2)ejh suggests(in the first comment above) 'Might the first half of this EXPLAIN why Arkell took the approach described in the second?'ie that I intentially took a Swiss Gambit approach to get a weaker field.
On a general note,as has been pointed out elsewhere,the only absentees in 2008 amongst active players who are clearly currently stronger than those present were Short and Adams,who hardly ever play and may well never play again,Howell who was playing in the World Junior,and Rowson.