Funny what slips your memory.

A few weeks ago I wrote this posting concerning a blunder - or a pair of them - made during the last round of the 4NCL in my game against Philip Bonafont. In a completely won position, I missed a simple reply - also unseen by my opponent - which would have forced a draw.

I say completely won - perhaps that underestimates just how "won" it was. At the time, I wrote:

Had my opponent seen it, it might have beaten all previous contenders for the most completely won position I had ever failed to win.

The previous contenders are pretty strong, good competitors in almost any field for won games that were not won: and yet they may not be the best, or worst, in my chess career.

A couple of days ago I was looking through some old scorebooks and noticed a game from Ilford in 2002, the score of which I'd failed to copy up correctly, there being a move missing in the early middlegame. So I played through the game to find out what the move played must have been, in order to enter it. And I was horrified to find, when I reached the end, that I had agreed a draw, inexplicably, in a position where I was overwhelmingly winning. The draw was agreed in the position given below, which shows the state of play after Black's 37...Kg7-g8 (which position had already been reached once before, on move 35). 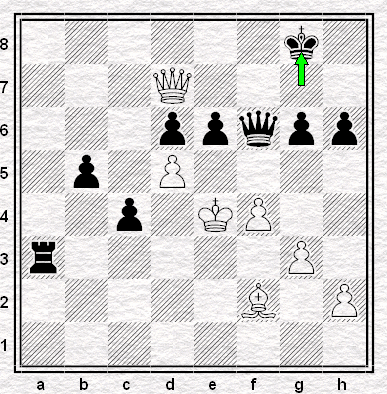 It's a real shocker. Astonishingly (or not) we were past the time control, which came on move 36: missing the win on move 35 or 36 with seconds to go is one thing, missing it again on move 37 absolutely unforgiveable. Black is winning, easily, with 37...Kh8 (or 35...Kh8) and would also be winning if the game continued from the diagram position, since 38.Qd7+ is met by 38...Kh7 and if 39.dxe6, Black mates in two. (36...Kh7 would of course have been the same position and the same win.) 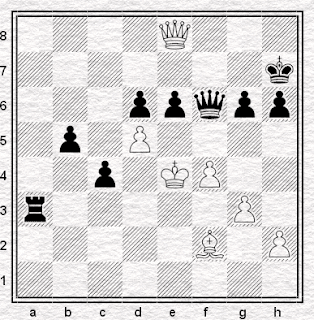 So what on Earth happened there? I can only speculate that I thought it was a forced perpetual, since if 39.Qd7+ Qg7 White has 40.dxe6 with a frightening passed pawn. It is, however, nothing: Black could easily win with 40...Ra8 (41.Bb6 is no threat) but in fact has a much faster win - and not one hard to find - with 40...Rd3! 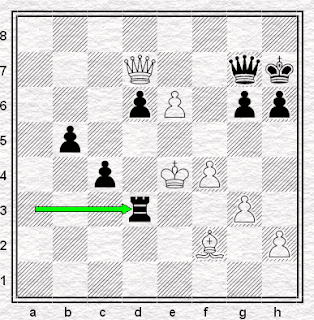 Of course if I really started looking there might be worse still (this, for instance, comes to mind). Odd, though, that I should have failed to remember this game when writing about a blunder against Philip Bonafont. Because - as you will already know if you've scrolled to the bottom to play through the game - my opponent, at Ilford in 2002, was also Philip Bonafont.

Meanwhile back where the good player are, our commentor Jack Rudd needs to win today - against the kid - for an IM norm.

The British Championships have not been held in London for years.
Surely their would be more entrants
and more Chess Media interest.

John Saunders floated that idea on the BCM blog this time last year, and there was a discussion on the subject. It has merits and demerits: the merits are those you suggests, the demerits are that venues and accomodation might well be a lot more expensive.

There's also a North/South issue in that many Northern players may feel that what's good for players close to London may not be good for them, and given that there have been threats of breakaways and secessions from the ECF before, their views are not to be neglected. (I'm sure we'd be interested in hearing them here.) Sometimes (and I say this as a Londoner who's lives in the Midlands and the North) it can be too easy for Londoners to assume that it would be better to hold things in London.

To me the idea is certainly worthy of discussion.

Meanwhile, congratulations to Jack for achieving his norm. I'm keen to know whether he thinks he was winning that all along...

Since you've now apparently gained the title, may we assume you'll be able to live with these minor aesthetic deficiencies?

I think I'll be able to live with it.

Fortune favours the lucky, as they say. :)