Three Aphorisms and an Explanation

I've been spending a fair amount of time at the 6th Staunton Memorial over the past few days.

Bughouse may be the least spectator friendly game known to humanity but classical chess tournaments can't be much better. At Simpsons-in-the-Strand the demonstration boards are too small/too far away, it's frequently not possible to see through the thicket of players and arbiters to see the boards at all and even when it is without any kind of commentary patzers such as myself are left largely clueless as to what's going on*. Still, perverse as it may be, I have to say I'm enjoying it hugely.

My favourite game so far was the latest installment in the decades long Short - Timman rivalry. Nosher surprised the Dutchman in the opening with an unusual queen manoeuvre then sacrificed the exchange for long-term compensation eventually reaching this position at move 19 ... 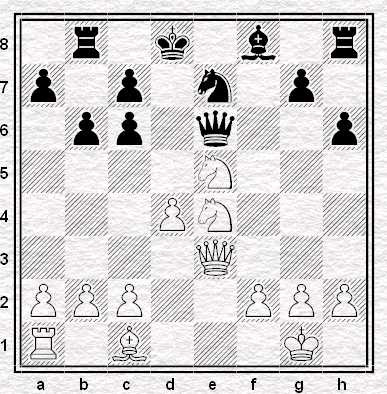 ... at which point he blundered.

"Nigel, alas, had neither computer chip nor soothsayer to prompt him, but it is still a little surprising that he should have missed such a tactical blow"

So says the official tournament website but I think I can explain.

When exchanging pieces it's what remains on the board that matters.**

First let's take a look at what actually happened.

Short chose 19. Qb3. I remember being quite impressed at the time. With White material down and Black suffering from a king stuck in the centre and poor development it had not occurred to me to look at lines where the White queen leaves the board.

Once played, though, it was not to difficult for me to understand why Short had chosen this path. (More or less) forcing the queen trade gives White an open a-file and allows him to regain his material as Black spends a tempo avoiding the knight fork. Moreover, getting rid of Black's queen leaves his minor pieces gummed up while White's knights dominate the board.

19. Qb3 is obviously a good move in that it increases White's advantage and leaves him clearly better. Still it deserves a "?" because there's an even better move available that kills Black stone dead instantly.

When you find a good move look for a better one.

Now this is all very well on paper but applying it at the board with the clock ticking is a different matter entirely. After lobbing in the exchange Short had used up a lot of time, particularly on moves 14, 15 and 16, trying to figure out how best to place his pieces to take advantage of Black's temporary difficulties. It seems that at the critical moment he chose to make up some time by playing a good move quickly.

It was Short's great misfortune to have two promising ways to proceed. One good move and one extremely good move. I'm sure that if Timman had a better way to defend against 19. Qb3 Nosher would have looked deeper into the position and found the winning idea.

A surprise he missed it? Perhaps, but understandable I think. What I find harder to fathom is how a player of Short's experience allowed himself to lose the game on time - but that's another story.

Perhaps you've already seen this position and know how Short could have won. If not, today's final maxim may help you.

* Although it was a different story yesterday when Andrew Stone, having watched England polish off South Africa at the Oval, turned up and helped me get a grip on Short-Cherniev and Wade-Adams in particular.

I didn't know I was fond of saying that!

re Short's oversight. There are two other things. One, it's a fairly unusual tactic. Two, Short probably trusts Timman not to blunder into a two-mover.

I've heard you say that many times.

Funny, I agree with the idea (of course) but I only remember ever stating it once!

Went to the Staunton this afternoon and discovered that one of the sponsors is Barry Martin, artist and chess player. There's someone on the ECF grading list with that name, tho' no grade, playing for "4NCL Staunton". Must be the same guy.
Get on his website there's a pic of him playing chess with Duchamp's widow in 1991; French Defence. Remarkable.
Martin S.

Perhaps it's just in my head I hear you saying it!

Just want to check I have this right;

Have I missed anything?

magicmunky, in your Qd7 line, where does the Black king go after Ndf7+?

I'm a bit surprised Short didn't see Nd6 as, to my mind, the position is asking for a move like that... White is the exchange for a pawn down but better developed. Black's king is in the middle and he has lost the right to castle. Two knight forks are "in the air" and Black's queen is undefended. White has the initiative... Isn't there another aphorism about not swapping pieces when you're attacking?

Nd6 is indeed the winning move

Guess that explains why my grade is 90, thanks for pointing it out Angus