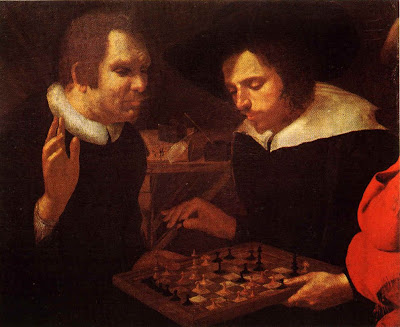 Must be an exciting game judging by Ben Jonson's hand movement or is there some other reason?

This time we have a double portrait of a famous pair playing chess. Much has been written elsewhere about Shakespeare and chess so, boldness be my friend, for this comment I’ll take a different tack and focus on a striking feature of this picture: the hands (well spotted, George!). They appear in most chess pictures. In the Chess in Art posts, to date, 15 out of 18 show hands in varying numbers. What are they doing, artistically speaking, in this and other chess pictures?

Well, to begin at the beginning: chess pieces alone on the board do not a picture make. You couldn’t call such a tableau dynamic and exciting. So the artist needs to animate this lifeless subject, and employs hands for the purpose. And if you are going to put in hands, they’d better be doing something meaningful, useful and where appropriate, dramatic.

Hand #1. This hand is making a move. Of the relevant Chess in Art posts, 13 of the 15 with hands show one of them doing it, and to clinch the point there’s an elephant’s trunk up to it, too (Chess in Art V). Obviously, no-one has told the artists what we chess players know: most of the game is spent not moving, just as most of a game of football is spent not scoring goals. The press pack squats by the net, cameras poised to capture the ball at the back of it when it occasionally arrives; so artists might also crouch behind their easels, brushes dripping, hoping for a move to turn up; and they could watch their paint dry as they wait. Thankfully, Van Mander managed to stay awake, and caught the unlikely action when it happened.

Note that how the hand moves is significant, too, as a casual survey of Chess in Art will show. It can be prim or primeval, elegant or animal. Shakespeare is rather refined in his action, as he daintily puts the bishop in place with his little finger cocked.

Hands #2 and #3. Van Mander has been canny because a more emphatic move from Will’s hand number one and, oops, hands two and three might have dropped the board, the position could have been lost to posterity, and the artist left with an awkward gap in his picture. What this pair of utilitarian hands do, then, is hold the ring while the others fight it out; Will and Ben lend one hand each to the task symbolising their mutual trust and respect. With the benefit of hindsight, though, I’d suggest putting the board on the table behind. This would avoid accidents in the future and the hands could do a theatrical flourish, or two, elsewhere.

Hand #4. The last one carries the heaviest burden of meaning. This one is the star of the show, the class act, a Laurence Olivier of a hand, upstaging all others around. It plays off the board in a grand gesture of surprise and consternation; as it happens suspiciously like the one that appears in de Man’s 1670 picture, discussed in Chess in Art X (you remember; the one where the wife gives the husband a beating). We suspected De Man of plagiarism on that occasion when we found him “borrowing” from Vermeer. Go back to his picture and you can see him at it again, this time “borrowing” the van Mander/Ben Jonson gesture of 1604. Shameless. What a piece of work is de Man.

Let’s face it, most non-players won’t have clue that there is drama unfolding on the board. Therefore, Van Mander enlists help from the show-stopping hand to explain it. OK, other body parts play bit parts, the faces for example, but the hand has the leading role. For the benefit of any viewer who does not understand the language of chess, the hand tells them what the twenty six pieces are saying. Its job is interpretation. The message? Mr Jonson is no doubt infatuated with chess, and has worked hard to improve his game but here, more’s the pity, his love’s labour’s lost. The reconstruction (below) confirms that the bard is about to deliver mate. The curtain falls.

With acknowledgments for the position to “Chess and Shakespeare” by Edward Winter. www.chesshistory.com/winter/extra/shakespeare

De Man delights not you?