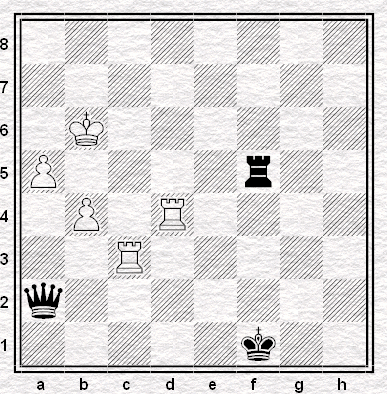 While most of you were probably watching England beat Croatia last Wednesday, I was following the chess from Bilbao, as the game between Anand and Aronian stretched out well beyond the time control. Anand, having blundered, found himself with rook for queen, but in an ending that, it seemed to me, Aronian might easily fail to win.

One of my earliest memories of watching live chess on the internet involves a Gelfand-Svidler game from the FIDE world championship in 2001 which came down to Gelfand's rook against Svidler's queen, and other than that just the two kings*. It must have been a frustrating and embarrassing experience for the Russian, who will have known that it was a theoretical win, and presumably also knew roughly how it should be won - but in practice, he couldn't do it. (Especially embarrassing, on at least one occasion he missed a simple win.) It's not so easy though, especially with time running out. If you feel like giving it a go, try winning the same endgame against the computer - with the analysis window hidden. Not easy at all.

Anyway, Anand didn't manage to put up the same fight Gelfand had - or rather, Aronian proved rather more adept at finding the right line than had Svidler - and we got to the position at the top of the column after Anand had played 71.Kc5-b6. I was just expecting Aronian to check on e6 and finish off the game, when the online service claimed he had taken on a5 with the queen instead. 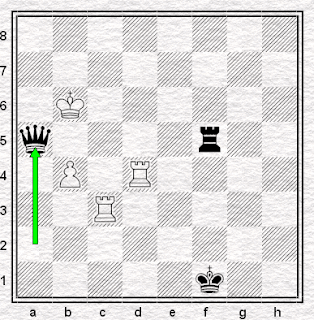 This seemed improbable unless either Aronian was doing it for a bet, or there had been some earlier error in the rendering of the moves and the position was therefore not as given. Still, play continued for some moves - the queen, suspiciously, not being captured - and I gave up in frustration and started following the football on text updates. Later, I went back to the Bilbao website and found that it had been corrected. The queen hadn't gone anywhere near a5: Aronian had indeed checked on e6 and won in short order.

No great harm done. Nevertheless, once that sort of thing starts happening, you start distrusting the evidence, not so much of your own eyes, as of the online board in front of them. 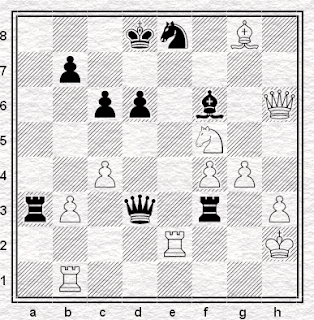 On Saturday we came to the last round and the last game to finish, Aronian v Radjabov. After Black's 44...Qc3-d3 we reached the position immediately above, and I naturally expected Aronian to finish the game with 45.Rbe1. Instead, however, after Aronian had thought for a long time, the board showed that he'd played the incomprehensible 45.Reb2. 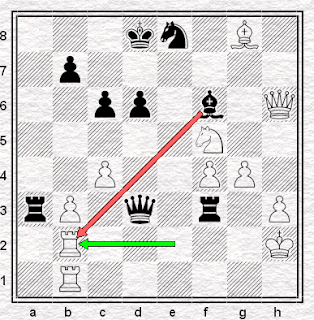 What madness was this? Instead of winning the knight and the game, he takes his rook away from the open e-file and puts it en prise to the bishop on f6.

Naturally, the rook was captured and Black won the game in a few more moves: equally naturally, I decided that in all probability no such thing had happened and that there must have been some sort of transcription error prior to the Aronian's inexplicable 45th. I continued to believe this until opening my daily Chess Today newsletter the following morning and finding out that Black would have enjoyed rather more play than I had thought.

Indeed, if you input the position before White's 45th into a chess engine, you may find that at 14-ply, the winning advantage awarded to 45.Rbe1 (which, although less than on earlier assessments, is still a tasty +2.00 on my Rybka at 13-ply) suddenly flattens out to 0.00. It's still barmy though, since having a perpetual check half a dozen moves down the track is better than resigning after five, as actually happened. (I don't think White can do better than a forced draw: Baburin offers 46.Ne3 as a possible alternative but it doesn't seem to make any difference after 46...Bd4 47.Qg5+ Nf6).

So something, still, is very wrong. What did Aronian see? And what did he think he saw?


[* in point of fact this isn't quite true, since Svidler could, I believe have held onto his extra pawn with 75...Qf1. But even after that, the ending is of course still won.]
Posted by ejh at 8:25 am

My guess at what happened in the first game is this:

1. The players finished the game and then started analysing or demonstrating variations and moving the pieces around on the board.

2. The board had move sensitivity (technology which detects which piece is on which square and converts the physical moves made on the board into a digital record which can then be used to relay moves over the Internet).

3. The board got confused by the post-game analysis and incorrect moves were relayed.

Maybe the ridiculous time control was to blame.

Nope. He had absolutely buckets of time (assuming you're thinking of the second example). It was only just past the time control.

This is well demonstrated by the captions to the photos here (as indeed is Topalov's tie, as referred to yesterday).