Three Streatham and Brixton Chess Club players took part in the 79th Richmond Rapidplay this Sunday, amidst a bumper field totaling 127 competitors. The present writer somehow managed to win half of the Under-180 grading prize, with 4/6 in an Open that was jointly won by GM Simon Williams and IM Gavin Wall with 5/6 - that's ahead of a strong field that also included GM John Nunn and IMs Graeme Buckley and 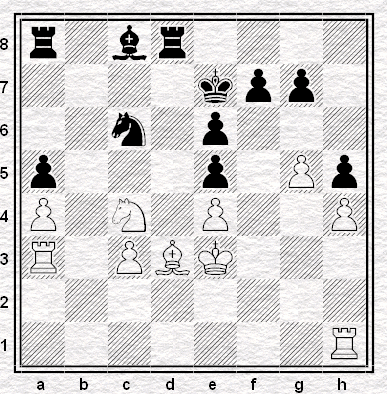 Full results will soon be able available on the tournament website.

I'd like to say I fully deserved my prize and that I'm proud of my 4/6 - but in fact, I didn't play anyone higher rated than me! I'm not even sure I deserve a grading prize on the back of such a lucky draw, but of course that didn't stop me taking it.

To the right is a position from one of my games - where it's black to play. "Nice tactic," my opponent said after the game. Kind of him, given the slew of blunders I followed it up with, going on only to draw this particular one. I wondered before the tournament how rusty I'd gotten over the summer - the answer being, very.


Here's a photograph - again thanks to Vad - of myself and co-winner Alex Galliano receiving our prize: 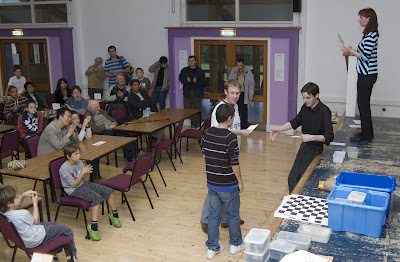 Now, has that put you in the mood for some pre-season rapid chess? In that case, this Monday evening (15th September) will see the Third Gerald Duncumb Memorial Open, taking place upstairs at The Crown & Greyhound in Dulwich Village. Prizes total £100 - first place taking home £70 -
Posted by Tom Chivers at 10:01 am

The Crown and Greyhound, by repute, is the most expensive pub in London, though I'm fairly confident that repute is wrong.

But my opponent played instead 3.Raa1.

In the photograph, did your applause wake up the old bloke in the middle?

No, you're right that white retains some play in your line (as he did in the game as well.) If there were less pawns, white might even have been better. Crafty's evaluation changes from about -1 to about -3 after 1...Rxd3+, which in rapid chess it turns out is not decisive!

"Fewer", as Tesco would tell you.

*anonymous* if you click the photograph for a larger version it looks like said fellow is awake, but wisely choosing not to applaud Chivers and his undeserved bounty.

The old gentleman is Fred Coombes, one of the most active players on the chess circuit.

Come on Tom, it was only four pints!

'It was darker now.'

The Milky Bars are on T.C. ... or have I already missed out?

EJH:
as far as the expensiveness of the crown and greyhounds goes I doubt it very much. Many years ago, perhaps getting on for a decade, I paid more than £3 for a pint of lager on the King's Road.

RE: details in the photograph.

I believe a peek at the larger picture also reveals regular visitor to the comments box Richard J loitering in the background.

There's a lot of loitering going on. Is that Neville Belinfante imitating Colombo by the door?

Breaking news....somebody has been careless enough to phone Nigel Short at Liverpool when he had his mobile switched on.

Wow. So the live feed was right! There needs to be an Informator symbol for that, as I've said before...

How about a smiley?

Jonathan - just as long as you don't get Richard J confused with Richard... ;)

Someone's put a statue of Susan Lalic on the stage! Neville stop picking your nose.

Tom - many thanks for publicising the Duncomb memorial. I just put a link on your chessgames page, then noticed that you'd already blogged about it here.

Would Streatham members be able to bring a few clocks ? We don't know how successful our publicity will prove to be and just might run short. Don't worry if this isn't possible - we'll sort something out.

ejh - The Crown and Greyhound is not really all that expensive. It probably has that reputation because it's in Dulwich Village and is one of the nicest pubs in London.

John - it probably is! In truth I drank there a few times when I was living in East Dulwich, though my preferred location (I could get a bus there) was normally that Youngs pub opposite Peckham Rye Common, forget the name.

Yes, it is me in the background. And, yes, I am Richard J, a regular visitor but infrequent contributor to the comments box, not Richard, a much more frequent and intelligent contributor than me.

Fully-detailed results are now up on the Richmond Rapidplay site, the Open ones being here.

Curiously, Akash Jain (whom I drew against) and Julien Shepley (whom I beat) both finished with 3/6 - a point behind me . . . but each with a better grading performance than me!