How long does now last?

Who is the strongest player in the world right now? Such a simple looking question but surprisingly tricky to answer.

Starting with the obvious we could remind ourselves that it's Vishy Anand who is World Champion. Leaving aside the complicating issue of whether or not Anand can legitimately consider himself 'champion' before winning a match, it's now virtually a year since he won Mexico City. Is his victory there relevant to 'now'? We might want to reserve judgement until the forthcoming* Anand-Kramnik contest but that won't kick-off for another five weeks. Depending on your point of view it may, or may not , tell us who's strongest then but I want to know now.

According to FIDE Anand has been Number One since April 2007. Unfortunately for our purposes the most recent official FIDE official rating list was published over two months ago and a lot of pawns have been pushed since July 1st. Anand has played just four times** since the last list came out but FIDE's July top ten average over 18 games each. At this distance, then, we can't be sure the official ratings tell us about the relative strengths of the leading players now.

Sadly, it's not just the fact that a new list appears only once per quarter that causes problems for the FIDE ratings. In fact the current process ensures they are out of date even on the day of publication (which particularly hurt Magnus Carlsen this time around).

Once more, it seems, we have to return to an unofficial website, chess.liverating.org, to find out what we, or at least I, want to know.

My visit to Hans Arild Runde's site earlier today showed clearly that the results of Friday’s games from Bilbao have had a significant impact on the top of the list. The upshot of Anand losing to Topalov and Carlsen beating Radjabov (see the excellent reports at Chess Vibes for details) is that for the first time Carlsen has an objective claim to be the strongest player on the planet. It's true that they are a just a wafer thin mint apart but right now Magnus Carlsen is number one with a rating of 2791.3 and Vishy Anand is in second place with 2790.9. 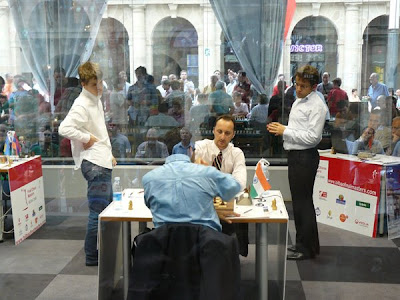 It's not surprising Anand is slipping down the rankings.
As this photo from chess vibes clearly shows, Vishy is losing his head.

Now there's an obvious question as to whether a 0.4 elo point differential actually reflects anything in reality. Even if you accept that a live rating system is preferable to quarterly updates (I do) and even if you accept the idea of updating the system during tournaments and not as they finish (I do) you'd be hard pressed to defend a claim that any system could be quite so accurate. For now, then, we'll just say that mathematically speaking at least, Magnus Carlsen is the strongest chess player in the world.

Of course that's my now.

As I sit here in Clapham’s Green Bag cafe munching my chocolate cake, slurping my tea and tipity-tapping away at my lap-top it’s late on Saturday morning. In a few hours time Anand will be playing Carlsen in Bilbao so by the time anybody actually reads this – your now – things could be very different. 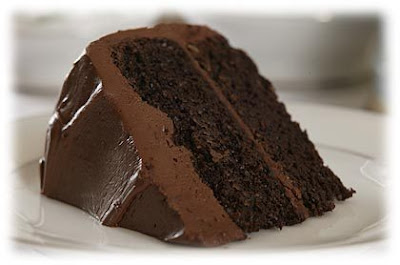 * If you want to know precisely how long you have to wait you can go to the official website where you'll find a clock that's counting down to the kick-off. At time of writing it's 37 days, 22 hours, 6 minutes and 24 seconds.

** He shares the title of 'Most Inactive' of the leading grandmasters with Topalov. Ivanchuk, not surprisingly, has played more games - 44 - than anybody else.

They drew and according to chess.liverating.org Carlsen has a rating of 2791.6 and Anand is a full point behind on 2790.6

The "liveratings" fail to take into account that Anand (and Kramnik) are probably both currently handicapping themselves severely to avoid revealing their World Championship preparations.

Forget the chess, just give me that piece of chocolate cake! That looks really good. I think I gained a few kilos just looking at it.

RICHARD:
The "liveratings" fail to take into account that Anand (and Kramnik) are probably both currently handicapping themselves severely to avoid revealing their World Championship preparations.

Well that's true ... but I happen to think that's a strength. Any rating would be the same of course.

Ratings should demonstrate how well people are actually playing - regardless of any reasons (legitimate or otherwise) that could be affecting results.

Sure, but it calls into some doubt whether they can be used to objectively rule on who is the "strongest player in the world".

I got that picture of the cake of the internet but it looks exactly like the slice I ate.

Green-Bag keep trying to persuade me to sample their carrot cake but I'm fairly hardline about the fact that cake should involve chocolate somewhere along the line otherwise what's the point?

Live ratings: fine if rated chess only consisted of supertournaments live on the internet, not so fine when it doesn't.

Sure, but it calls into some doubt whether they can be used to objectively rule on who is the "strongest player in the world".

I'd say it does the reverse. The live ratings rather prove Carlsen is the strongest player in the world right now (just - I'm open to the argument that 1 elo point is within the margin error of the system and proves nothing).

It may well be true that Anand will perform better than Carlsen during the match and once it's over but that's for the future.

EJH:
Live ratings: fine if rated chess only consisted of supertournaments live on the internet, not so fine when it doesn't.

A very reasonable comment - but for the elite for the most part it does. It's not a perfect system I acknowledge but I do think it's better than a quarterly update.

As Elo ratings take into account past performance - indeed are almost entirely comprised of the measurement of past performances - how can they accurately measure who is the best player in the world right now?

hence my question - "How long is now"?. Also hence my belief that the rating system should be as current as possible.

I accept your point though EJH. Ultimately we're trying to measure something that's impossible to get at. Well I am anyway.

'I know this party hat,
I know this crown:
I believe that the study of ratings
brings the honest man down'

Do we have to have ratings at all? Isn't there a case for saying they are overused? Couldn't we get along OK without them?

I've just posted about this at my blog. I'm playing devil's advocate a bit, but I think there is a point to be made - I believe we put far too much store by ratings.

Yes Yes and Noish would be my answers to you SonofPearl.

Tournaments wouldn't function without sections (Open, Major, Minor, etc) and sections require rating limits, which in turn require ratings. Tournaments that select need ratings to guide them in inviting a field too. Also, individuals use ratings to monitor their personal performance. So there are some important uses of ratings. But the liverating thing is, obviously, not important at all.

the liverating thing is, obviously, not important at all

Burn him burn him.