Two against one is not quite equal 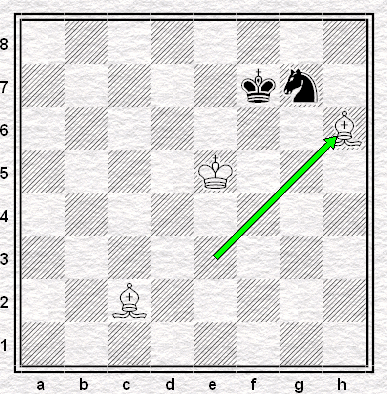 L'Ami v Laznicka, European Union Championship, 2008, eighth round, position after White's 59th move, in which he took the last pawn on the board and thereby created the unusual ending of two bishops against a knight.

This is one of those endings of which our view has changed since computers were set to work on them. My edition (McKay, US, 1941) of Basic Chess Endings - which I consider still to be the greatest single book ever written about chess - has relatively little to say about the ending, and, perhaps unavoidably, is not able to offer a definitive opinion. Fine does say that (of all two-pieces-against-one combinations in pawnless positions) "two Bs against Kt offer the best winning chances of all" and he adds:

Attempts have been made to show that two Bs win against Kt in all positions, but the prooofs are inconclusive.

Half a century later in Batsford Chess Endings (1993) Jon Speelman was of a different view, giving four different ways to break down the "Horwitz and Kling fortress" (which can be seen here) which process takes, if Wikipedia is correct, a maximum of 45 moves with best play.

One assumes this means 45 moves until the knight is captured: the point is worth raising, since you'll see different figures used in these situations, and those different figures mean different things. When, for instance, I entered the diagram position in the Nalimov Tablebase it informed me that Black loses in 55 moves. Ah, more than 50, I thought - until I realised that of course this was 55 moves until mate, a distinctly and importantly different yardstick.

Indeed, while typing the last paragraph I received Wednesday's Chess Today in which Alex Baburin makes the point explicitly: "White checkmates in 55 moves against the best defence", although a more useful figure to give might be the number of moves it takes to capture the knight. I'll not take you through the analysis itself (you can of course employ the database to do this for you) except to give the final position: 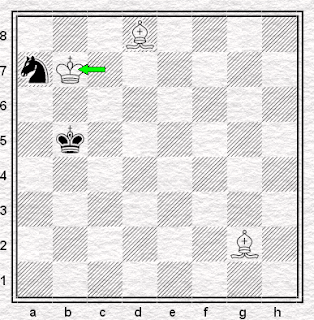 in which, on White's 38th move after capturing the final pawn, the knight is finally trapped.

So, you ask, does this mean this is now a winnable ending within the fifty move rule? As it happens, not all positions of this type are won within the limit, since not only does it take nearly fifty moves to break down Kling and Horwitz, but it can take some time to get there in the first place, taking us well beyond the fifty. Wikipedia suggests 66 moves as the absolute limit, though Speelman gives 69 - so I can only assume that the analysis available to him a decade and half ago has been improved upon.

Speelman gives two examples of the defender failing to hold the position: the second game of the 1961 Botvinnik-Tal rematch and his own defeat at Linares in 1992 by a very well-informed Jan Timman.

Laznicka did all right on Tuesday, though: and L'Ami threw in the towel after seventeen moves. Whether through fatigue, frustration, or recognition that his opponent knew what to do and he did not, I cannot say. Personally I'd have no idea whatsoever what to do if the ending ever came up: probably I'd just move the pieces around the board and see what happened.

But that's pretty much what I do most of the time.