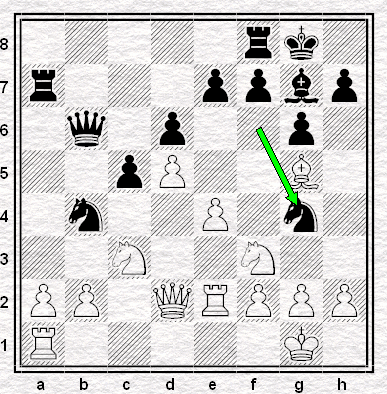 In Think Like A Grandmaster, Kotov mentions the following incident:

During a round of the 1946 Moscow Championship the usual silence of the tournament room was suddenly broken by a frightful cry. The players jumped up from their seats and went over the board where the game between Bronstein and Bonch-Osmolovsky was being played. The temperamental player of Black (who by the way was a good boxer and was well used to receiving physical blows as well as mental ones) was sitting there holding his head in his hands, while young David Bronstein who was also very upset by the unexpected reaction of his opponent was showing everybody what had happened. 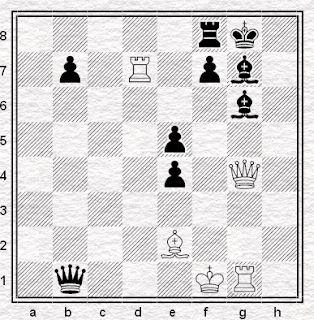 In the diagram position Black had just checked with his queen. White moved out of check with K-N2 [I have an old, descriptive-notation copy, and on this occasion have chosen not to translate - ejh] and after some thought Black advanced his KP. Bronstein then played RxQ.

"It's just terrible", said Bonch-Osmolovsky in his distress. "The white king on N2 is a big piece and I didn't notice the fact that the white rook behind it was now attacking my queen."

Kotov is a little sceptical about this explanation, as am I, but perhaps a little less sceptical after a game I played in the recent Individual Championship of Aragón, in which event I came tenth.

In the sixth round I played Lorenzo Montes Santos and found myself in a strange pseudo-Benko Gambit in which I had a tempo to spare over orthodox lines. Nevertheless, I played with the nervousness that is my hallmark in that kind of opening and which probably explains why I play 1.Nf3 which normally avoids them. After Black's fifteenth move, the position at the top of this piece arose, and I decided I should ease the mounting pressure by trying to exchange off Black's g7 bishop. Play continued along the lines I had envisaged: 16.a3 c4 17.h3 Ne5 18.Nxe5 Bxe5 19.Be3 attacking the queen in the following position - 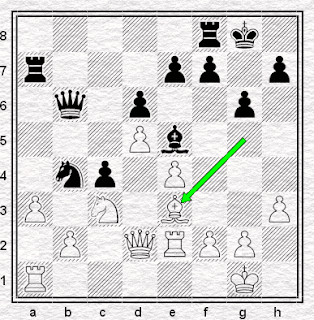 Black moved his queen to a6: and I followed my plan, moving the bishop to d4 and swapping off the bishops. The game was later drawn, in an unimpressive effort on my part (given below for anybody who needs to be convinced). I was just preparing myself for a post mortem in which we'd see how I'd failed to win the ending, when my opponent startled me by asking instead: "why didn't you take the rook with your bishop?"

What? I didn't understand what he was talking about for a moment, until I realised that god, yes, the e3 bishop must have been attacking the rook on a7. How could I have possibly failed to see it? Because, I imagine, I was so wrapped up in my plan to exchange bishops that I didn't see what else was happening on the board. I had an idea, and it was a good one, so I played it: and I never took the couple of seconds I might have taken to look round and see if anything else was on.

But maybe something else, too. When we sat down to look at the game, using a nice, chunky set, and actually got to the position where I could take the rook, I wondered. 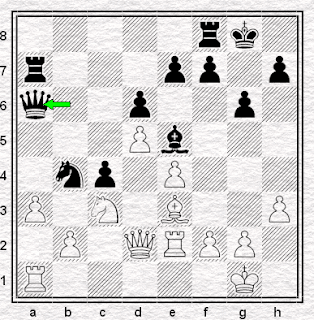 Perhaps I never saw it, because I never saw it. The diagram, for once, actually serves to obscure rather than to illustrate: it obscures because you can see.

Everything is the same size, because everything is flat. I should have still seen it, in both pertinent senses of the word: of course I should. But I didn't. And maybe because, on the real, three-dimensional board, the queen - which, like Bronstein's queen, is a big piece - hides the rook.

I thought you normally left the d pawn in your half in such openings!?