It was Adams, and it was Short 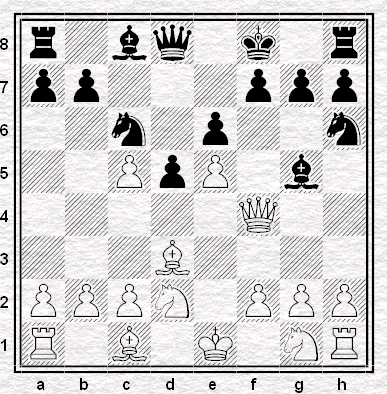 This swift and abrupt finale to a much-anticipated game produced a certain amount of disappointment, if not actual criticism. (In my case it produced a certain amount of relief that it had coincided with Jonathan's fortieth birthday posting, since otherwise I might well have liveblogged the game and this would have been a very damp squib indeed.) Whatever the rights and wrong, I don't think it was what any of us had wanted to see.

However, on the English Chess Forum, the tournament organiser, Professor David Robertson, bids us put aside our disappointment: it wasn't what it looked like. He says:

Adams-Short was not a "short draw", absolutely not in the sense that neither player relished the fight. I've spoken to both players at length this evening, separately and together. Both are largely in agreement on the circumstances. Adams arrived ready to play for a win; Nigel arrived well-prepared for Mickey. Nigel out-prepared Mickey, and Mickey was forced to bale out or risk significant disadvantage.

Well, fair enough. But is it really so simple?

It's probably not too much to say that Michael Adams could be considered the world authority on the White side of the Tarrasch version of the French Defence. I can think of no player, since Karpov ceased to play to super-GM strength, who has played 3.Nd2 so exclusively, for so long, at such a high level. Even in the 3...Be7 variation (in which Adams, normally almost unbeatable in the Tarrasch, has lost a couple of games to Morozevich) it would be highly unusual for him to be out of his depth before ten moves had been played. Is that really what happened?

Looking at the Chessbase online database, I find that after 1.e4 e6 2.d4 d5 3.Nd2 Be7 4.e5 c5 5.Qg4 Kf8 6.dxc5 Nc6 7.Qg3 the reply 7...Nh6 had apparently only been played once before, previous to the game under discussion. But that game was scarecely obscure – Svidler v Nepomniachtchi in the 2006 Russian Championship, a game in which White declined the repetition with 12.Qa4 and went on to win. I'll say with confidence that it is inconceivable that Michael Adams has not studied both that game and the diagram position. He must therefore have formed a view on whether White was obliged to acept the repetition, or whether it could be avoided, either in the way Svidler did or with some other move. Yet nevertheless he chose to go down this line, and a grandmaster draw resulted.

So why would he do this?

(a) Although playing for a win, he deliberately chose a line in which he knew he would have to accept a draw, in the hope that Short didn’t know it. (This seems unlikely.)

(b) Although he thought White should be able to play for a win with Qa4, he was surprised that Short was prepared to go down this line. He therefore assumed that Short had also investigated the variation and come to a different conclusion, and on the day he lacked the nerve to test his preparation against Short’s.

(c) He was surprised by 7...Nh6 and decided that this was not an occasion on which he wished to reveal his preparation after Qa4, and thus decided to accept a draw rather than show it.

(d) This is all irrelevant as the players had implicitly agreed to draw before the game and therefore went straight for the repetition.

I'm not sure which of these best represents my view. But I'll say this, too, with some confidence: I don't think the evidence is wholly compatible with the idea that Adams arrived at the board full of desire to play for a win.

I was disappointed too.

Could it be that there is another alternative: Adams got his move order wrong - I'm wondering if he might have played 7 Nf3 or 8 Nf3.

I played Adams in about 1996/7 twice in about six months. First game he played 3 Nd2 against my French. I played one of my best games ever and was equal according to him after 35 moves. Didn't stop me losing 10-15 moves later. The next time I played him he wheels out 3 Nc3. Think he was being pragmatic incase I had some great improvement! Of course I had no such thing. Still I appreciated the respect. The second game was a long respectable type of game which was only going to have one outcome (the obvious one). It is actually very tempting when playing someone a lot higher rated than you to go in for such a game- its like an unwritten pact- ok, you get your victory at almost zero risk to yourself whilst I get to play you for 3 hours or so and give a somewhat misleading impression to onlookers and anyone I tell that I was competing with the best.
Andrew

I've played something like six or seven games on the Black side of the Breyer against titled players. In every single one I can reasonably claim to have equalised at one point or another. But I've not picked up a single half-point...

Three points for a win, as in a recent Grandmaster tournament and it may not have been a quick draw.

Worth thinking about, and I hope to post early next week on some of the options. However it wouldn't make any difference if somebody was two points clear with one round to go...

3pts for a win is not a viable option when there are serious and material differences between playing with the black and white pieces. It would certainly necessitate a remodelling of the pairing system to prioritise getting a colour balance over pairing players on the same scores.

It also puts far too much importance on the "luck of the draw".

Therefore it can only be considered viable in all play all events (as, indeed, in football).

Since I'm unable to contribute any understanding of the French, Tarrasch or otherwise: shouldn't the text in your post read 9... Be7-Bg5 and 11... Bh4-Bg5 ?

Campion - it should, thank you, and I've now corrected it. Funny how you can spend hours writing and amending a posting and then overlook the bleedin' obvious.

Richard - it's an interesting and useful point. But I hope to have something written for the start of the week in which I may take a slightly different view!

Stewart Reuben came up with an interesting idea for alternative scoring:

If the game is decisive, the winner scores 3 and the loser scores 0.

If the game is drawn, there is a playoff of some sort. The winner scores 2 and the loser scores 1.

Hmmm and who's going to want to play blitz (for that is surely what it would be) every time they've just finished a long game?

The Svidler - Nepomniachtchi game contains a number of inferior moves by Black, starting with 14...Be7?! (better is 14...Bd7 15.Qc2 Bf6 with at least equality).

Most probably he saw something at the board which he overlooked in his preparation. This happens all the time - during the game you are bound to see a lot more than during your leasurely study.